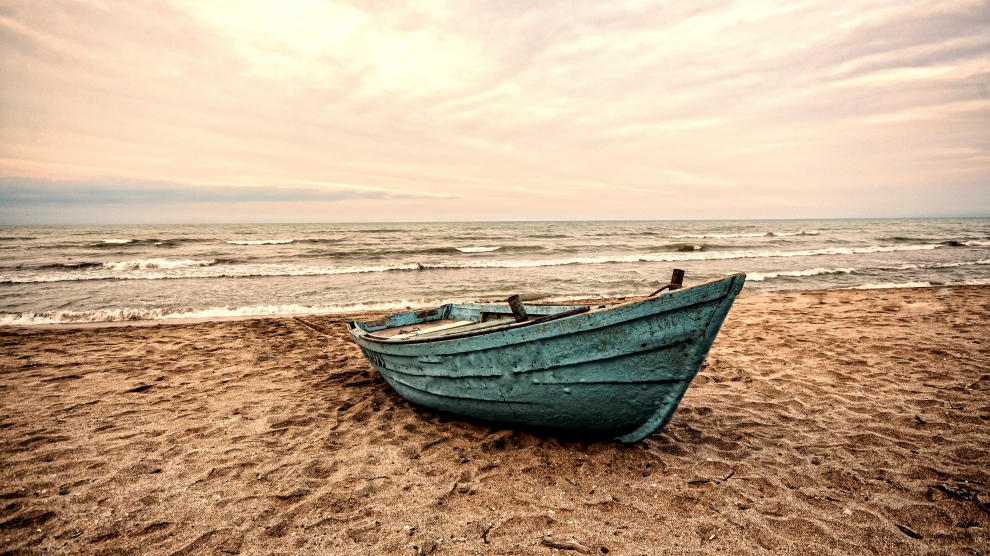 The Caucasus region has long been vexed with the problem of water shortages, but as the global climate continues to heat up the situation is worsening rapidly, with many in villages dependent on natural water sources now raising serious concerns.

This is certainly true of Banka and Neftchala, two villages either side of the Kura River in eastern Azerbaijan. Located near the river’s delta, as it enters the Caspian Sea, this region is particularly vulnerable to the negative impacts of the river’s degradation.

The Kura, which originates in northeastern Turkey and flows through Georgia (where it is known as the Mtkvari) before reaching Azerbaijan, usually creates regular flooding in its lower course. However, the flow has of late slowed so much that saltwater from the Caspian Sea is now flowing upstream and into villages like Banka and Neftchala that previously relied on freshwater for much of their day to day actives.

“We can’t use it, nor can we use it for animals to drink,” one local resident Famil Akhmedov, a pensioner in his 80s told the AFP news agency, “we’re in a terrible state.”

The region most impacted by this shallowing is east of the Varvara damn, where contaminated sea water is creating an unfolding ecological disaster. Now instead of bursting banks, cracked grey silt is visible where the waterline used to be, and water tanks stand waiting for trucked-in deliveries.

As summer comes to a close, residents of this region have already suffered acute water shortages for months, with many saying that the amount of freshwater delivered by the authorities is far less than the real needs of the village.

Those with crops and livestock are particularly affected, which is detrimental for towns that thrive mainly on agricultural production. Now, plants need watering and mouths are thirsty, and residents on the ground are becoming increasingly angered by what they perceive to be government indifference, and in some cases, negligence. According to Banka resident Famil Hasanov, the villages are “suffering from water shortages and the local authorities are refusing to listen to our complaints.”

Many are quick to blame government mismanagement and inaction.

“Over the past hundred years, it has never happened that saltwater has filled the mouth of the river. The authorities should have seen to the problem and made sure in advance to prevent this,” Farman Huseynov, a resident of Neftchala told the BBC.

Multiple dams and reservoirs upstream have cut off water from the Kura and reduced its flow. According to Rovshan Abbasov, a professor from the department of geography and environment at Khazar University, this is not just a national problem. “The main reason for this is the management of water resources in the Kura and Araz rivers. At present, neither in Azerbaijan nor in neighbouring countries is the management of water resources properly established.”

Currently, there are four reservoirs further west in Turkey, and Georgia wants to create a similar number. An agreement on the management of water systems, the International Convention on the Use and Protection of Transboundary Watercourses and Lakes, has 25 members including Azerbaijan, but neither Georgia, Turkey, Armenia nor Iran are signatories. According to professor Abbasov, this is because “it does not serve their purpose. They are upstream countries.”

However, others believe the Azerbaijani government itself is also to blame for the worsening environmental disaster. Due to the nature of the country’s bureaucracy, management of water resources, agriculture, environment, hydroelectric power and ecology are all split into different competencies, meaning a discordant and decentralised response to a problem that needs a joint and cohesive resolution.

By April this year, it had already become clear to the country’s authoritarian president, Ilham Aliyev, that the problem was getting too large to ignore, and he issued a decree on the “rational” use of water resources, setting up a commission tasked with replenishing the Kura’s water levels.

Three months later, Mr Aliyev told a press conference that “from now on, drinking water and irrigation projects will be on our agenda as the most important issues,” saying that the main goal of the governmental task force is to “eliminate the mistakes and existing shortcomings in this area in the coming years.”

However, many analysts doubt that the commission will come to a reasonable nor concrete solution in the foreseeable future. Moreover, one of the reservoirs which environmentalists blame for diverting flow, the Mingachevir reservoir, is located in Azerbaijan itself.

Telman Zeynalov, an environmentalist and the head of Azerbaijan’s Centre for Ecological Forecasting, believes that the tendency to blame only climate change and reduced rainfall is problematic. Rather, he points to the shallowing of the Kura as being at least partly “the fault of the Mingachevir reservoir, which draws too much water from the river”.

Mr Zeynalov further believes that if the president’s commission was genuinely aimed at understanding and alleviating the situation, it would come and visit the river’s delta, and study what is happening there in detail.

“They say that some officials built structures where the waters of the Kura and Arak merge. Due to these structures, too much water has been taken from the river. The commission should ask about this issue,” says Mr Zeynalov.

However, the commission and other officials believe that the depleted water levels are caused by locals themselves.

“There is a rapid growth of farming here, new farms are being created, the volume of water use has increased dramatically. And it is used wastefully,” says Ramiz Mammadov, the director of Baku’s Institute of Geology. “The number of new farms and fish farms along the river is constantly growing, leading to excessive water use,” he adds. “There are water pumps everywhere you look.”

However, the ability of locals to harness the water in such a way is down to the system of regulations in place, which all leads back to government inaction and mismanagement.

Even the president acknowledged in July that the government’s promotion of certain industries, such as water-intensive cotton farming has accentuated the issue, as well as the sometimes “indifferent attitude of relevant bodies”.

Perhaps this self-awareness of the government is the first step to alleviating the ecological crisis.

“This problem isn’t anything new. We are witnessing similar issues in arid regions around the globe,” continues Mr Mammadov. “The problem can be resolved if there is political will and if we stop abusing nature.”

Yet for locals, the time for action is long overdue.

Azerbaijani officials estimate that there is currently only enough water in the country if everyone uses it prudently. Many people already have to buy water for their cattle, gardens and orchards, sometimes even for drinking, when the supplies trucked in by the government do not suffice.