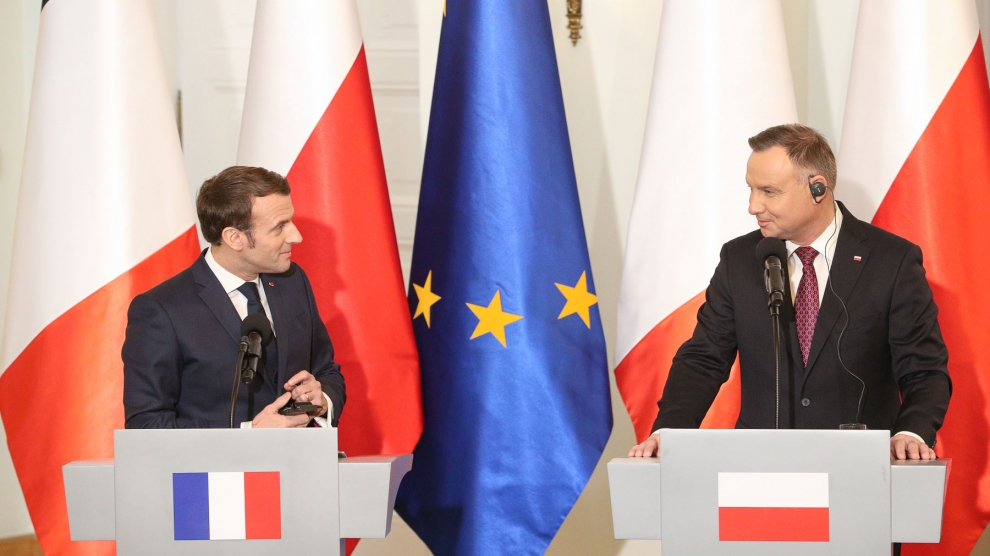 With the United Kingdom now out of the European Union, France is looking to revive its efforts to reform the EU by forging a closer partnership with Germany and Poland.

During his first visit to Poland since becoming French president in 2017, Emmanuel Macron, together with the Polish prime minister Mateusz Morawiecki, announced that they would organise a summit dedicated to the so-called Weimar Triangle, a trilateral cooperation format between the German, French and Polish governments that has been largely inactive at the governmental level since 2016.

In a joint press conference with the French leader, Mr Morawiecki told reporters that the Weimar Triangle consisted of like-minded countries aiming to strengthen Europe and would be a “very good format” for cooperation, since the three countries involved now represent 42 per cent of the EU’s population.

The Polish president, Andrzej Duda, also welcomed the move, saying that France had become a European superpower now that the UK has left the EU.

“Undoubtedly, France’s role in the EU after Brexit is significantly growing,” Mr Duda said, calling Mr Macron’s visit a breakthrough for relations between the two countries.

The French president’s visit to Poland is widely seen as a complete U-turn in his policy towards Poland. Mr Macron has been – or rather was – one of the strongest European critics of Poland’s ruling Law and Justice party (PiS) which – according to the previous statements of the French president and many others – has undermined the rule of law in Poland with its judicial reforms.

Prior to the European parliamentary elections in May 2019, Poland, Hungary and their ruling parties were at the centre of Mr Macron’s campaign, positioning himself as the defender of European democracy at a time when Poland and Hungary are becoming authoritarian nations.

Mr Macron has also been critical of Poland for not signing up to make Europe a carbon neutral continent by 2050 and has even threatened to block Poland’s access to EU funds aimed at supporting green energy transformation. During his visit to Warsaw, however, he stressed that Polish efforts to ease its economy’s dependence on coal, which accounts for 80 per cent of Poland’s electricity, should not be underestimated. He also promised the Polish government help in securing EU funding for energy transition.

What’s more, while Mr Macron did mention the rule of law as a problematic issue and called for dialogue between the European Commission and the Polish government, saying it was a “concern”, the matter went largely undiscussed, indicating that France might be willing to at least partially abandon its criticism of PiS if Poland signs up to the EU-wide reforms it will propose in the near future, such as stepping up defence cooperation, taxing tech giants and strengthening the fight against climate change, amongst much else.

The French leader’s largely insufficient remarks regarding the rule of law came the very same day that Mr Duda signed a controversial bill into law that allows for the sanctioning of judges who criticise the appointment of other judges.

The interests of the two countries also align in terms of the Multiannual Financial Framework (MFF), the EU’s next seven-year budget, with both governments hoping to maintain heavy funding for the bloc’s Common Agricultural Policy. MFF talks have been underway for years and are expected to be completed in the next two months.

At the same time, Poland, one of the biggest Russia hawks in Europe, could find itself in disagreement with France, whose leader has vowed to restore relations with Russia just as he has turned away from closer relations with US President Donald Trump. Speaking in Kraków on February 4, Mr Macron said that it would be “a major error” for Europe to distance itself from a certain part of the continent some feel uncomfortable about.

“France is neither pro-Russia nor anti-Russia, it is pro-European,” Mr Macron said, trying to reassure the Polish leaders.

While Paris would welcome a rapprochement with Moscow and Warsaw continues to view Russia as a threat, the French leader has again renewed his push for deeper military ties within the EU, something he called an “an indispensable complement” to NATO.

Despite Mr Macron’s and Mr Morawiecki’s previous disagreements about the future of the Alliance, this will certainly be of interest to Poland. Mr Duda also expressed Polish intentions to join the production of the first joint European tank, currently being developed by the other two members of the Weimar Triangle.

Other disagreements could also cloud the new French-Polish strategic relationship: while Poland is one of the fiercest supporters of the bloc’s enlargement towards Europe’s east and in the Western Balkans, France continues to oppose both.

In late January, the French government also rejected suggestions by EU institutions that the Eastern Partnership, a strong cooperation format of the EU and six former USSR countries including Ukraine, Moldova and Georgia, should lead to actual membership in the European bloc.

The German government’s stance on the new Berlin-Paris-Warsaw triangle is unclear, clouded somewhat by its repeated criticism of Poland’s judicial reforms. However, German chancellor Angela Merkel is also confirmed to attend the Weimar Summit. scheduled for July 14.

Romania sets course for early election as government falls
Emerging Europe still has much work to do to improve LGBTI rights, but it’s not all bad news
Comment