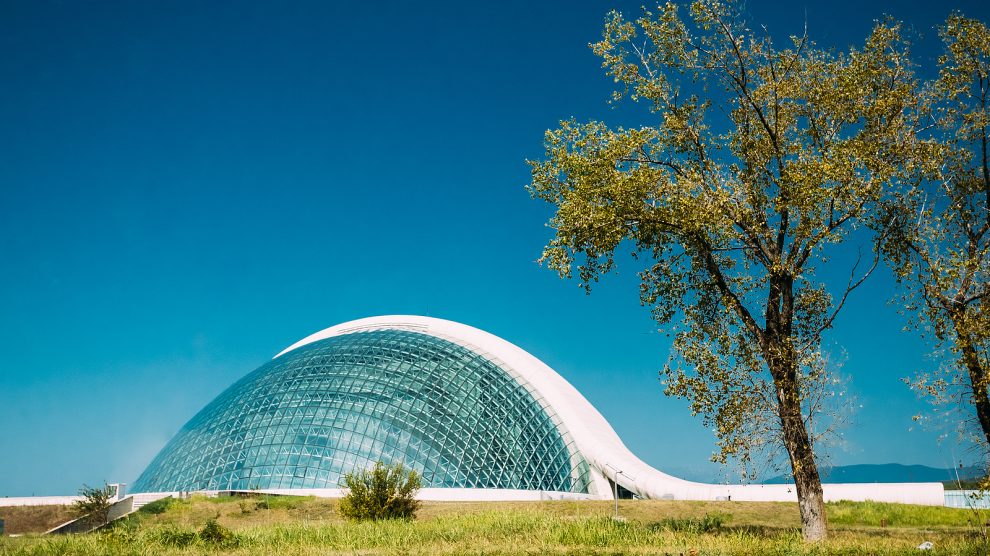 The clear shell of the new Georgian parliament building in the city of Kutaisi was supposed to represent the transparency of democracy. But a decade after breaking ground on the ultramodern structure, its glass panels are opaque with dust and its grounds becoming a wasteland after parliament packed up and left in late 2018.

Why fears of a Russia-Belarus merger never come true

Relations between Belarus and Russia continue to baffle observers with their unpredictability. Just a year ago, the two countries were holding tough negotiations over road maps outlining their closer integration, which, ironically, only made public their growing differences. Following the August presidential election in Belarus, which threw the regime into crisis, the irritation previously shown by both sides was suddenly replaced with demonstrative cooperation. The Kremlin supported Belarusian President Alexander Lukashenko throughout the biggest protests in the country’s history, and continues to back him in his conflict with the West.

Voting despite the state: How Bulgarians living abroad are making their voices heard

Coalition negotiations following the Bulgarian parliamentary election in April have failed to produce a government. With the country now set to hold a new vote later in the year, Julia Rone of the University of Cambridge reflects on how Bulgarians living abroad have sought to make their voices heard.

A fitting end for Radovan Karadžić, the sadistic warlord dubbed the ‘Butcher of Bosnia’ who loved to humiliate us

There is a poetic justice in the ‘Butcher of Bosnia’ being transferred to a British prison to serve out his life sentence for war crimes. Bosnian Serb leader Radovan Karadžić was both an architect of the ethnic conflict that claimed 100,000 lives, and the memorable face and voice denying to the world but justifying in the same breath the cruel ethnic cleansing which culminated in the massacre of 8,000 Bosnian Muslim men and boys at Srebrenica in July 1995.

As Europe marked VE Day last weekend, relations with one of its liberators, Russia, remained fraught with hostility and mistrust. Czechia has expelled dozens of diplomats, amid claims that Moscow was behind a deadly sabotage operation.

Polling suggests that a record number of young Poles identify with the left following their mass mobilisation in last autumn’s abortion protests. But this is not translating into increased support for left-wing parties and may simply signify hostility toward Poland’s right-wing government.

Why Russia’s modern military has Eastern Europe so on edge

Modern Russia’s way of war is much more about finesse and technology. It’s also much closer to the Western way of war as practiced by the Germans and today’s Americans.

With a Chinese university project in Hungary drawing controversy over a lack of transparency and concerns about academic freedom, Beijing’s influence in higher education in neighbouring Serbia continues to grow.

In north Kosovo, mining for bitcoin on ‘free’ electricity

Attics, basements, garages and even whole houses in northern Kosovo are being rented out for cryptomining, a lucrative business when electricity is ‘free’.

In Moldova, a snap election could help President Maia Sandu finish what she started

In Europe, Maia Sandu’s election as president of Moldova on November 1, 2020, led to a collective sigh of relief. Sandu, a progressive and worldly former prime minister who wants to forge closer links between Moldova and the European Union, defeated the incumbent Igor Dodon, who is openly pro-Kremlin and visited Russia around 30 times during his four-year term as president.

The making of a goal machine

Bayern’s Polish striker Robert Lewandowski is the most complete, most ruthless, most polished centre-forward of his generation. But what we see is only the finished product.

How digitising Tajikistan’s heritage is connecting a scattered diaspora

Covid-19 has pushed culture into the digital realm. The newly-formed Tajik Culture Centre is using this new online focus to reach out to millions of Tajiks across the world — many of whom are left culturally stranded while working abroad.