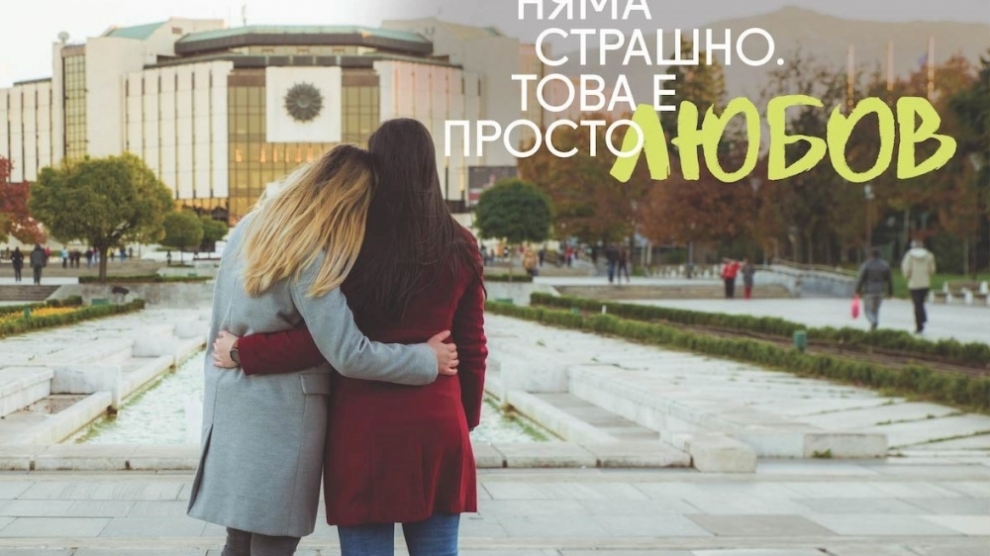 Homophobic vandals in the Bulgarian city of Varna have defaced a number of billboards promoting tolerance towards the LGBT community. Depicting same-sex couples hugging and holding hands, and the slogan: ‘It’s not frightening. It’s just love’, the billboards were covered in paint, scrawled over and subsequently taken down.

Bulgarian news portal Dnevnik reported that the local authorities in Varna, on the Black Sea, received over 70 complaints a day regarding the billboards. Simeon Vasilev, co-founder and managing director of the GLAS Foundation, which stands for Gays and Lesbians Accepted in Society, and whose acronym in Bulgarian means voice, told Bulgarian national TV: “These billboards do not contradict in any way the established rules for outdoor advertising. Their removal and vandalism is what is unlawful.”

Mr Vasilev added that an image of two men hugging is not something scandalous, nor pornographic. “The campaign’s purpose is to address discrimination and hostility towards people with a different sexual orientation, and the reactions to this billboard prove that this problem is very profound. You cannot become gay just by looking at a billboard, just as I have not become heterosexual by looking at photos of naked women and attending [heterosexual] weddings.”

The billboards are part of a 150,000-euro campaign called Together for the rights of the LGBTI people in Bulgaria, co-financed by the European Union. The campaign is planned to run until the end of January 2019 in the capital Sofia, as well as in Plovdiv and Burgas, in addition to Varna.

Dimitrina Ivanova, from a group calling itself New Life said: “What will our children think? Children are incredibly vulnerable.” Her organisation took it upon itself to alert the authorities to the billboards, which she claimed would lead to lewdness and debauchery and are in breach of Bulgaria’s penal code.

Monika Pisankaneva, one of the leading activists in the pro-LGBT campaign, stated: “We are launching a campaign to change public attitudes. The billboards are in many cities across the country. They feature two women or two men, embracing, photographed in public buildings, in public places. The idea is that gay couples are all around us, they are part of society and are people like everyone just looking for their happiness.”

Ms Pisankaneva added that the Workshop for Civic Initiatives Foundation, which has been a key member of the project, will refer the matter to Varna city council.

Earlier this year Bulgaria refused to ratify the Istanbul Convention on domestic violence due to the inclusion of the term ‘gender’. The word has been widely misinterpreted in Bulgarian society as a synonym for anything related to homosexuality or transsexuality, or even meaning a ‘third gender’.