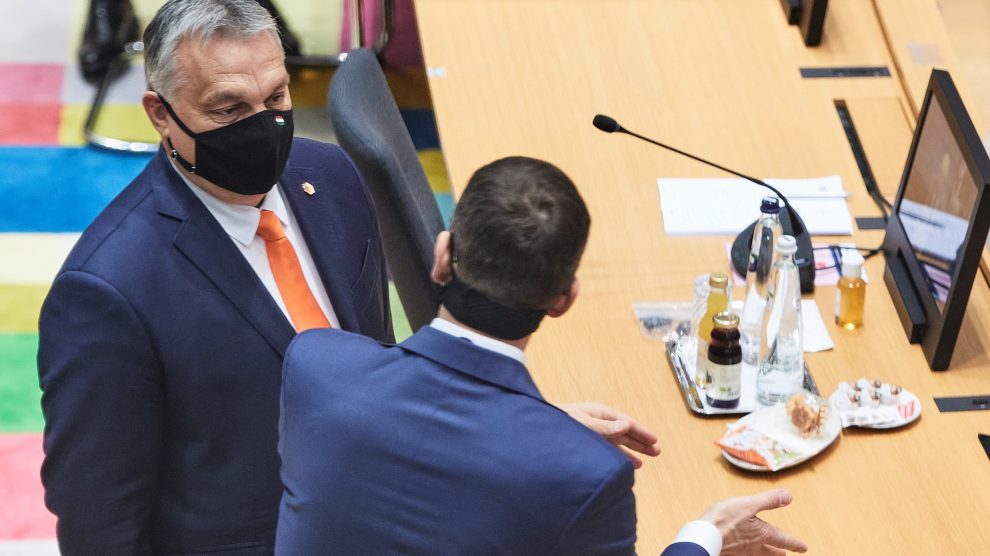 EU heads of state and government meeting in Brussels have agreed a deal that will see Hungary and Poland lift their veto of the bloc’s multi-year budget and Covid-19 recovery package.

European Union leaders reached a deal on December 10 to end a serious dispute over plans to link the bloc’s 1.8 trillion euros budget and post-pandemic recovery package to compliance with the rule of law.

The compromise still ties EU disbursements from the budget and recovery package to a mechanism that insists on respect for the rule of law, but such sanctions cannot now be triggered until the European Court of Justice has ruled on the legality of the mechanism, a process that could take more than a year to complete.

The agreement came at an EU summit in Brussels which had threatened to be overshadowed by Hungary and Poland using their veto to block the much-needed funds.

“Now we can start with implementation and build back our economies,” said Charles Michel, the president of the European Council. “Our landmark recovery package will drive forward our green and digital transitions.”

The draft deal still needs to be accepted by the European Parliament, which is scheduled to vote on the agreement next week.

Ska Keller, president of the Greens/EFA Group in the European Parliament, welcomed the deal and called it a success in the defence of the rule of law and the start of Europe’s recovery from the Covid-19 pandemic.

“We welcome the fact that for the first time in its history the EU is linking the payment of subsidies to rule of law criteria and is launching a green budget and reconstruction plan,” she said. “We have tirelessly called for more tools to defend the rule of law in Europe. While this rule of law mechanism will not solve all the problems we face, it must serve as a basis for further action. EU funds must not be open to abuse by oligarchs and corrupt politicians. The last-minute agreement is a compromise that keeps the legal text on the rule of law mechanism unchanged and it must remain this way.”

However, Ms Keller added that she “regretted” that the EU now has to wait for the European Court of Justice’s ruling on the imposition of sanctions and that the rule of law mechanism will not apply as early as next year.

“Breaches of the rule of law are going on as we speak,” she said.

The refusal last month of Poland and Hungary to accept the new rule of law mechanism had stalled attempts to finalise both the EU’s upcoming 1.1 billion euros seven-year budget and its 750 billion euros recovery fund, in a serious setback to the bloc’s plans to bounce back from the effects of the Covid-19 pandemic.

The first sign of a breakthrough came on December 9, when Poland’s deputy prime minister Jarosław Gowin, considered one of the Polish government’s more moderate members, told reporters that a deal was “within reach” between the German EU presidency, his own country and Hungary.