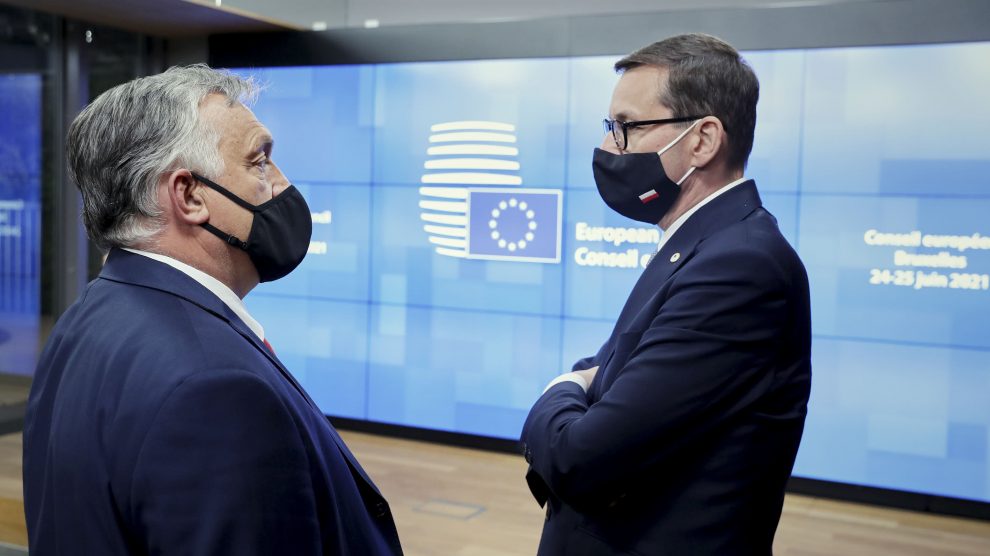 Opinions of the European Court of Justice’s (ECJ) Advocate General Manuel Campos Sánchez-Bordona are not binding, but the Luxembourg-based ECJ usually follows them when making its final rulings.

The European Union’s highest court on December 2 advised that a mechanism linking financial disbursements to respect for the rule of law is compatible with EU legislation and that Hungary and Poland’s objections to the mechanism should be dismissed.

The European Court of Justice’s (ECJ) Advocate General Manuel Campos Sánchez-Bordona said the mechanism “was adopted on an appropriate legal basis” and that it does not overstep the competencies of the EU and its central institutions as laid out in the bloc’s treaties.

While Sánchez-Bordona’s opinion is not binding, the Luxembourg-based ECJ usually follows it when making its final ruling, which is expected early next year.

Poland’s ruling Law and Justice party (PiS) has been locked in battle with the European Commission, backed by the European Parliament, for the past five years over changes to the country’s judiciary, which Brussels claims has seen its independence undermined.

Hungary’s ruling Fidesz party meanwhile has been heavily criticised by Brussels for refusing to lift restrictions on the foreign financing of non-governmental organisations (NGOs) operating in the country.

At this time last year, Poland and Hungary threatened to block ratification of the EU’s 1.1 trillion euros seven-year budget and its 750 billion euros Covid-19 recovery fund in response to the plans to link disbursements to compliance with the rule of law.

A last minute compromise was eventually reached that stipulated any sanctions could not be triggered until the ECJ had ruled on the legality of the mechanism.

Hungarian Prime Minister Viktor Orbán said at the time that the compromise was “a victory for common sense” but may now be forced to rethink his stance in light of Sánchez-Bordona’s opinion.

The country’s justice minister, Judit Varga, said on December 2 that “before tears of joy fall from the eyes of the elite and the left-liberal press in Brussels, I would like to quietly note: this is just an opinion, the final judgement is expected only at the end of the year or at the beginning of next year”.

‘An assault on the rule of law’

In October, Poland’s Prime Minister Mateusz Morawiecki lashed out at EU leaders during a session of the European Parliament, telling Ursula von der Leyen “we will not be blackmailed” after the European Commission president vowed to take action against Poland after the country’s top court ruled that key parts of EU law were incompatible with the Polish constitution.

Morawiecki claimed the ECJ was responsible for a “creeping revolution” that threatened to undermine Poland’s sovereignty.

In response to the publication of Sánchez-Bordona’s opinion, Sebastian Kaleta, secretary of state at Poland’s Justice Ministry, called it “an assault on the rule of law that [the EU] wants to defend”.

Last month, the European Commission sent letters to Poland and Hungary in an informal first step toward triggering the mechanism that could see EU funds withheld over rule of law concerns.

The letters have been viewed as a signal that the Commission is ready to use the mechanism as soon as the ECJ makes its final ruling.

Photo: Viktor Orbán and Mateusz Morawiecki at a meeting of the European Council in June. (© European Union).