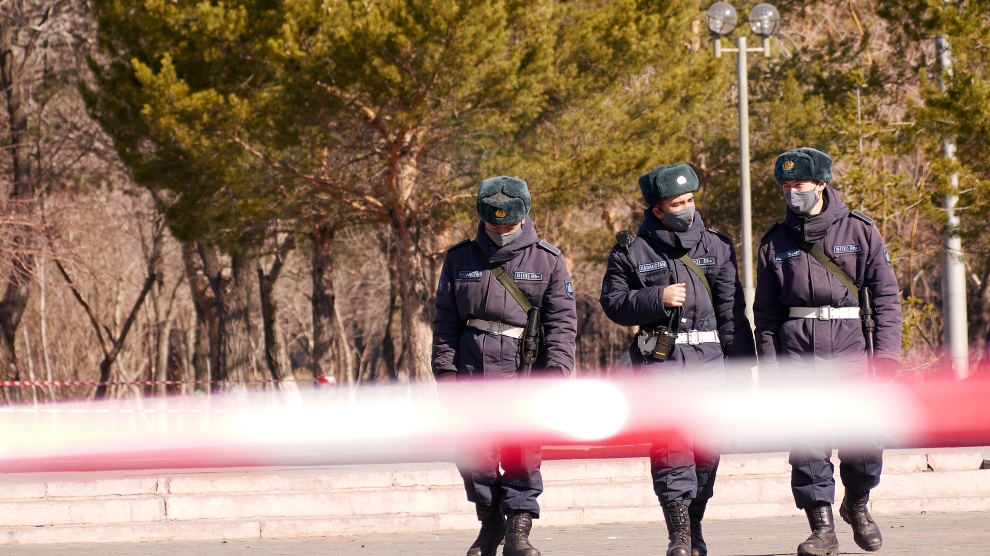 Human rights groups are concerned that the EU is allocating funds to Central Asia with little regard for human rights abuses.

The European Union (EU) should set consequences if Central Asian governments fail to meet more ambitious human rights goals, Human Rights Watch (HRW) said on November 16. The NGO says that the EU’s response to political turmoil, such as in Kyrgyzstan, or to challenges created by the Covid-19 pandemic, should prioritise respect for human rights and the rule of law.

HRW’s call came shortly before the EU’s top diplomat Josep Borrell met remotely with foreign ministers from each of the five Central Asian countries, Kazakhstan, Kyrgyzstan, Tajikistan, Turkmenistan, and Uzbekistan, for the 16th EU-Central Asia Ministerial meeting. It was the first such gathering since Borrell took office in December 2019.

“Central Asian countries’ responses to this year’s crises would have been more effective if they had lived up to their pledges to respect rights,” says Hugh Williamson, Europe and Central Asia director at Human Rights Watch. “The EU should be clear that greater support to the region is tied to genuine human rights reforms.”

The new EU strategy for Central Asia, adopted in 2019, equipped the EU to advocate for upholding human rights standards in the region. The strategy is based on the premise that democracy and the rule of law are necessary to make public institutions more responsive and accountable to their citizens.

Since the outbreak of the Covid-19 pandemic, the EU has allocated more than 134 million euros to the Central Asia region as part of its Team Europe solidarity package. Funds have been granted to meet the immediate and longer-term needs of the five countries, in particular strengthening the health, water and sanitation systems and addressing the socio-economic repercussions of the crisis. The EU has been cooperating with the World Health Organisation, supporting the regional project on response to Covid-19.

The pandemic is having a serious impact on Central Asian countries, notwithstanding that some governments took steps, such as restrictions on movement, to protect their populations’ health. However, according to HRW, governments have also tried to limit access to information about the spread of the virus and restricted freedom of expression in discriminatory or arbitrary ways. Turkmenistan has yet to even recognise the presence of Covid-19 on its territory. Throughout the region, economic hardship and inequalities have increased as a consequence of the Covid-19 pandemic.

Prolonged political turmoil in Kyrgyzstan, following protests that led to the annulment of the flawed October 4 parliamentary elections and to President Sooronbay Jeenbekov’s resignation, also put human rights at risk.

HRW also called on the EU to address other key human rights issues in the region, such as the death in custody of human rights defender Azimjon Askarov in Kyrgyzstan, in July. Askarov had wrongfully been behind bars since 2010, and his untimely death is a serious stain on the country’s human rights record. HRW wants the EU to press the Kyrgyz authorities to hold a genuinely independent inquiry into his death, provide adequate remedies for his family, and ensure that Askarov is legally and publicly rehabilitated. Gender-based violence also remains a pervasive concern in Kyrgyzstan, says HRW.

In Kazakhstan, President Kassym-Jomart Tokaev’s promises for reforms have not brought meaningful improvements. Peaceful protesters continue to be harassed or detained despite a new law on public assemblies. Amendments to the Trade Union Law lifted legislative restrictions, but obstacles to independent labour organising persist. The government decriminalised defamation, but many journalists continue to be harassed or attacked while doing their jobs. The activist Max Bokaev is still wrongfully jailed. Kazakhstan law does not criminalise domestic violence and fails to provide survivors adequate protection.

In Uzbekistan, HRW says that there has been little concrete and systemic progress in the past year, despite such promises since President Shavkat Mirziyoyev assumed power in 2016. There have been some concrete steps to improve the country’s human rights record, but people released from arbitrary detention are often denied legal rehabilitation, the criminal code retains deeply problematic provisions, and pledges to bring the nongovernmental organisation code in line with international standards remain unfulfilled. “The EU should make sure that Uzbekistan addresses important failings before granting new trade incentives conditioned by EU law on genuine implementation of core human rights treaties,” says HRW.

Until the end of April, Tajikistan denied the existence of Covid-19 in the country. Those documenting the spread of the disease faced retaliation. Over 150 political opponents, critics, or their lawyers remain behind bars for lengthy prison terms on political grounds. Prison conditions remain abysmal; activists report widespread torture and ill-treatment in detention. Critics in exile face attacks and abusive extradition requests, and their families and relatives at home are harassed and detained. Violence against women and girls remains a serious concern.

Finally, in Turkmenistan, the most repressive country in the region, it is impossible to determine the exact number of people imprisoned on politically motivated grounds, and scores of people remain forcibly disappeared, some for as long as 18 years. The government tightly controls information in the face of major social and economic fallout, with shortages of subsidized food putting people’s well-being at risk.

HRW now wants the EU to use its leverage to show that there will be political consequences if governments fail to translate their rhetoric for reforms into concrete actions.

“Pledges of reform suggest there are clear opportunities to improve human rights and the EU should support the aspirations for freedom and accountability shared by many citizens across Central Asia,” adds Williamson.

The EU’s engagement with the region is built upon Central Asia’s geographical location and tradition of bringing Europe and Asia together. The five countries of Central Asia also play a pivotal role in EU efforts to promote Europe-Asia connectivity. It is also a fast-growing market of 70 million inhabitants.

An EU-Central Asia Economic Forum is set to be held in 2021, giving special attention to the promotion of an innovative and sustainable approach to economic and business development, with a focus on greening the economy in all its aspects. If the EU is to count as a force for good in the region, it must also include a human rights element.

Covid-19 in Central Europe: No appetite for lockdown
From Commodore to SpaceX: Understanding the Polish tech diaspora
Comment