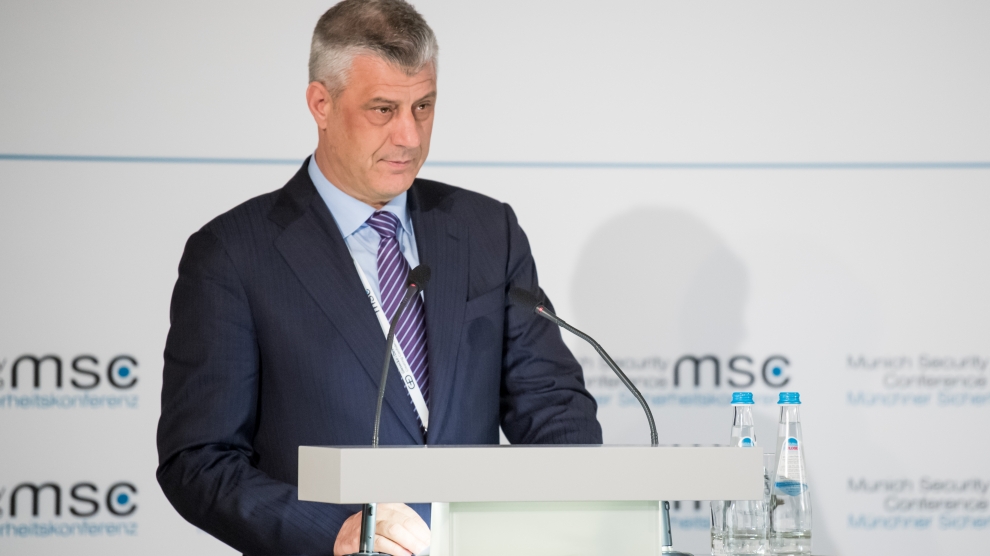 The president of Kosovo, Hashim Thaci, has for the first time suggested that redrawing the country’s borders to bring parts of Serbia with a majority Albanian population into Kosovo could end persistent tensions between Belgrade and Priština, allowing both nations to move towards EU membership. Mr Thaci (pictured above) said that he intends to present his ideas to Serbian President Aleksandar Vučić when they meet in September.

Although Mr Thaci did not reveal any specific details it is widely thought that his plan would see three predominantly ethnic Albanian municipalities in Serbia’s Presevo valley become part of Kosovo, with part of north Kosovo – where the majority of Kosovo’s ethnic Serbs live – being offered to Serbia in exchange.

Just last week President Vučić himself said that he wanted “proper borders” with Kosovo, admitting that the current impasse could not continue.

“I am pushing for a proper border with Kosovo’s Albanians,” he said.  “That’s my policy. To have a territory treated differently, without a clear idea what belongs to whom — that is always a source of potential conflicts.”

A deal on new borders would, however, anger many people in both Serbia and Kosovo. The Serbian Orthodox Church – which considers Kosovo the cradle of its faith – is deeply opposed to the idea. Others oppose the idea on the grounds that it would be tantamount to ethnic division. A group of 30 NGOs from Serbia and Kosovo have sent the EU’s High Representative for External Affairs Federica Mogherini a letter urging her to make “an unambiguous statement against the division of Kosovo or the exchange of territories between Kosovo and Serbia on an ethnic principle.”

German Chancellor Angela Merkel has already rejected any possibility of changing borders in the Balkans.

“The territorial integrity of the states of the Western Balkans has been established and is inviolable. This has to be stated again and again,” said Mrs Merkel, concerned – as are many in the region – that redrawing Kosovo’s borders could lead to border revisionism in Bosnia.

Not that a deal is imminent. President Vučić said that there will not be any agreement with Priština “during the next two-three months.”

Around 90 per cent of Kosovo’s two million people are Albanian. The country declared independence from Belgrade in 2008, and is recognised by more than 100 countries – including 23 of 28 NATO members – but not Serbia, Russia and a couple of EU members.

The EU has long made it clear that Serbia will not be allowed to become a member unless it comes to an agreement with Kosovo.