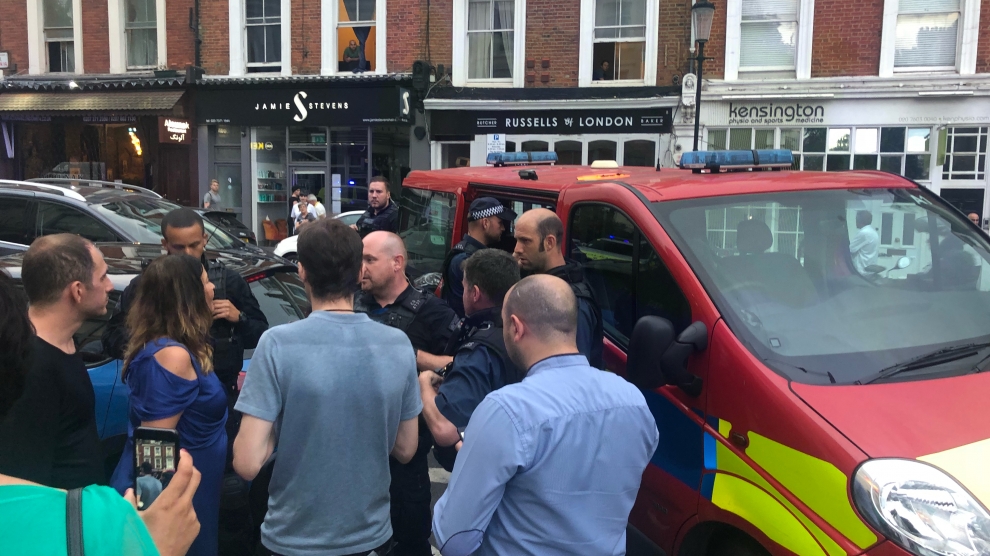 Graham Phillips, a blogger believed to be working on behalf of the Russian media outlet Sputnik, disrupted an exhibition at the Georgian Embassy in London on August 7, an event being held to mark 10 years since the outbreak of the Russian-Georgian war. The embassy was exhibiting the work of outstanding Georgian artist Gia Bughadze, who has depicted the war in many of her paintings.

“We were at an event to mark 10 years since the Russian military invasion of Georgia, and to commemorate the victims of the war and trauma we have experienced, when a master of fake news, the so-called British journalist Graham Phillips, burst into the embassy and aggressively began throwing insults around, repeating the classic Kremlin propaganda we witnessed back in 2008,” said Tamar Lobjanidze, who was at the exhibition.

According to Mr Phillips, the exhibition forms part of Georgian propaganda. He believes that the Georgians were the aggressors in the war, are fascists and NATO zombies. He was not alone: there were three other people attending the exhibition as guests who, after the so-called journalist’s arrival, began filming and throwing verbal insults.

“We experienced Russian aggression today,” said Tamar Beruchashvili, the Ambassador of Georgia in the United Kingdom. “The Georgian Embassy became a victim of this aggression when this man suddenly appeared, insulting us and calling the exhibition propaganda.”

Phillips was arrested after representatives of the embassy called the police. “We are waiting for a full assessment of this incident,” said the Georgian Ministry of Foreign Affairs in a statement.

August 8, 2018 marks a decade since the outbreak of the war in which around 1000 people are believed to have died. As much as 20 per cent of Georgian territory remains under Russian occupation.

Graham Phillips meanwhile has a long history of shilling for Russia, and was formerly employed as a freelancer by Russia Today. In recent years he has repeatedly used his social media channels to defend the Russian occupation of Crimea and the Russian separatist regime in eastern Ukraine. He is often pictured in the military uniform of Russian separatist forces and on more than one occasion has been photographed holding weapons.

He has twice been deported from Ukraine.