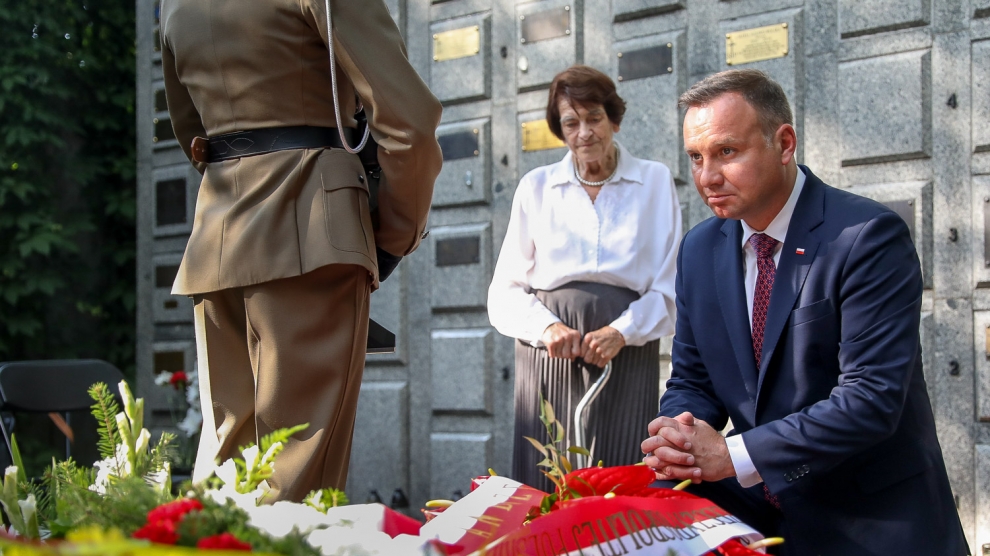 August 1 marked the 74th anniversary of the Warsaw Uprising, which began on August 1, 1944 and lasted 63 days. The uprising was an attempt by the Polish Home Army, led by General Tadeusz Komorowski to liberate Warsaw from German occupation.

Ceremonies commemorating the Warsaw Uprising and were attended by top state officials, veterans and city residents.

“We are paying tribute to the defeated, yet unbeaten. Your sacrifice, your loss of health or even life placed on the altar of the homeland made sense. All this led to the triumph of freedom and sovereignty for our homeland – values for which it is worth living or even dying,” Polish Army Field Bishop, General Józef Guzdek told the gathering at the monument commemorating Home Army soldiers fallen during the uprising and the entire German occupation of Poland.

“This place is a symbol of the suffering of the civilian population of Warsaw, one of the symbols of the improbable inhumanity with which the Germans treated Warsaw, the civilian population of Warsaw. We remember that, and we pay tribute today not only to those who fought in the Warsaw Uprising, but also to those who suffered in that uprising, who during the course of the uprising and after it were killed inhumanely by the Germans just because they were Poles,” said President Andrzej Duda, pictured above laying a wreath at a plaque to murdered civilians in Warsaw’s western Wola district.

Vlogger Patrick Ney has created 63 short episodes to explain what happened during the Warsaw Uprising with a new episode being uploaded each day.

“When you walk on the streets of Warsaw it is no exaggeration to say that you walk on the graves of tens of thousands of people who were murdered and executed, and thousands of people who fought for Warsaw’s freedom. More people died here in those few days than in the whole of France during the entire war,” Patrick Ney says in the first of his video series, which he has called 63 Days of Extraordinary Courage 1944.

“This is a city that didn’t accept slavery, even when Hitler ordered that every stone, every building be completely destroyed so that Warsaw would be razed from the earth”, adds Mr Ney.

On October 2, 1944, a ceasefire was negotiated by the Polish Red Cross and an act of surrender signed on the same day. Whilst the uprising did not succeed in liberating Poland from German occupation, it does serve as an inspirational story of how one city with limited forces took on the Nazis in a country that had been occupied since 1939, and whose people had suffered greatly.