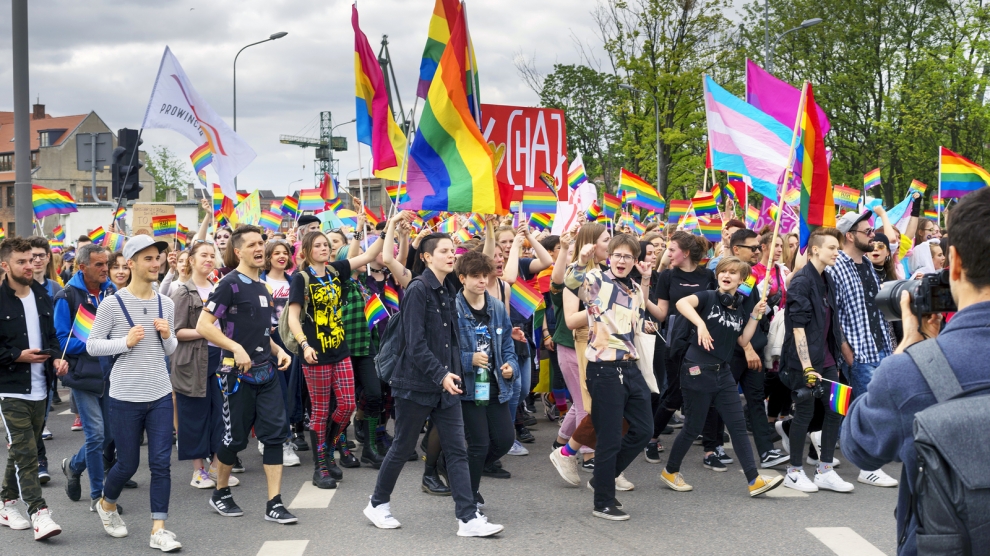 Police have made 25 arrests following homophobic attacks on a pride march in Białystok in northeastern Poland.

The equality march, on July 20, was the city’s first and was met with violent opposition. Polish newspaper Wyborcza.pl reported that a homophobic counter-protest group called on its members to “gather together to defeat the deviants” in online posts. Afterwards, the group declared: “Today we have had dozens of calls from fans all over Poland with congratulations for our courageous opposition to deviance.” Slogans such as “God, honour, homeland” were paired with the hurling of bricks, bottles and firecrackers at LGBT activists and marchers.

Poland’s ruling Law and Justice party (PiS) has made LGBT rights an increasingly politicised issue ahead of a parliamentary election in October as a way of appealing to its conservative voter base. Party leader Jarosław Kaczynski has previously argued that LGBT rights pose “a real threat to our identity as a nation”.

Interior Minister Elżbieta Witek said that police officers should ensure security regardless of the ideas, values and beliefs proclaimed by citizens, emphasising that, “any person who breaks the law … should know they can be held responsible”. Polish politician and president of the European Council Donald Tusk tweeted: “Football hooligans, antisemitism, homophobia – nothing new. The tragedy is power, which is their patron. All decent Poles, regardless of their views, must say: enough violence!” in response to the attacks on marchers.

In contrast, the education minister, Dariusz Piontkowski has questioned whether LGBT marches should be held in the future. “This kind of public gathering made by organisations trying to force abnormal sexual behaviours are meeting with huge opposition not only in Podlasie, but in other parts of Poland as well,” adding, “these kind of marches are a source of riots and could pose a danger to health of bystanders,” telling tvn24.pl that security should have more importance than the right to assembly.

The clashes in Białystok come after government-backed newspaper Gazeta Polska was met with international criticism after announcing a plan to distribute LGBT-free zone stickers in its issue on July 24.