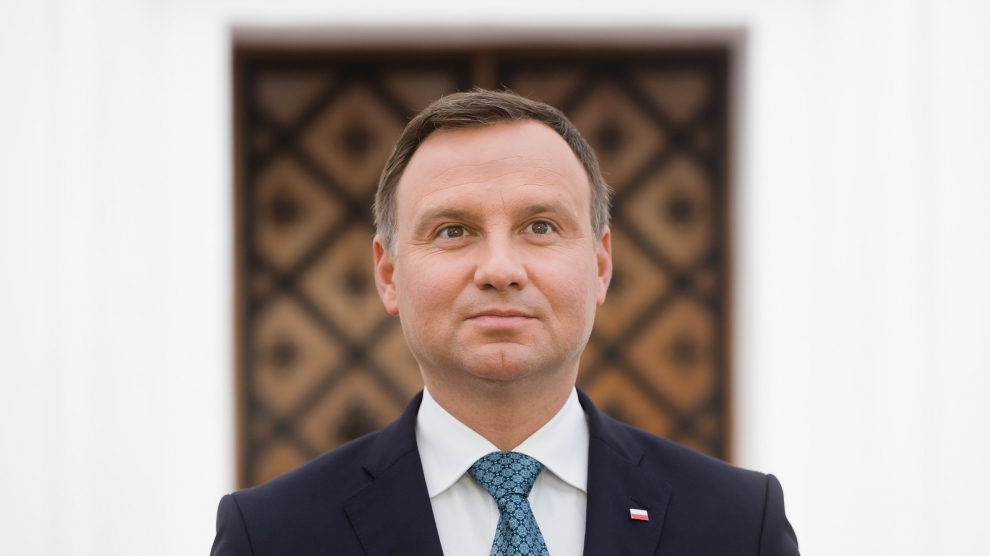 Andrzej Duda, Poland’s president, has for the fourth time since taking office used his power of veto. This time he has refused to sign into law changes to the way in which the country elects its members of the European parliament.

“Introduction of this law would result in large numbers of citizens not having any representation in the European parliament,” Mr Duda announced, adding that “the proposed law goes too far from the required rule of proportionality.”

The law in question was passed by Poland’s own parliament – with the backing of the ruling Law and Justice part (PiS) – back in July. It immediately came under attack as it would have meant that only the two largest parties – PiS and the Civic Platform – would have been likely to see their members elected to the 52 seats Poland occupies in the European parliament.

President Duda told reporters that “the proposed change would have raised the election threshold to over 16 per cent.” The threshold set by EU law is five per cent. Experts believe the new law would bring the threshold to between nine and 20 per cent.

Despite vetoeing the law, Mr Duda does want to see the electoral law changed.

“The existing voting system needs to be reformed as it is too complicated and not proportional enough…The simplification of the existing system is possible and if I get such a bill, I’ll gladly sign it into law,” Mr Duda said.

Critics believe that the reason behind President Duda’s veto has more to do with fear rather than creating a fair electoral system.

“They realised that the new rules may prompt opposition parties to create a large coalition which would be able to crush PiS in the vote,” Marek Migalski, a political scientist, wrote in an editorial for Rzeczpospolita.

“The aim of these elections is to select the most adequate representation of all Europeans so that their views and opinions can be fought for in the European parliament. Even the British, who for centuries have used majority voting at home, had to adapt their system in regards to the election of MEPs to make it more proportional,” added Dr Migalski.

“Why is the party that has the support of two per cent of Poles not represented in Strasbourg as one of our 52 MEPs? What, apart PiS’ own interest, stands in the way of expanding rather than narrowing the representation of our compatriots in the European parliament? Especially as the EU itself wants the European parliament to be as diverse as possible. Hence the requirement of proportionality of elections in all member states,” adds Dr Migalski.

Dr Migalski goes on to explain that in the case of Poland, it would be better to get rid of the thresholds completely, adding that the changes proposed in the law go against what is best for Poland:

“Firstly, they raise real thresholds, thus reducing the representativeness of our MEPs in relation the real opinions of Poles and anchoring MEPs in their electoral districts, which will distract them from real and complicated work in the European parliament in order to seek re-election in their home regions, Dr Migalski concludes.

Adam Szłapka, an MP, told TVN24’s Tak Jest that: “Jarosław Kaczyński was scared of the consolidation of the opposition,” adding that the PiS president “saw something starting to form, some consolidation on the side of opposition groups…the effective electoral threshold would be over 18 per cent, which would build a bipartisan system in Poland.” Mr Szłapka also believes that in the amendment proposed, “PiS, have manipulated the thresholds which in this respect is against European law.”

Mr Szłapka also stated that this is not the first time PiS have tried to manipulate the electoral process: they tried back in 2006, when in the end their efforts worked against them. “This type of manipulation ultimately turns against those who manipulate…If PiS wants to manipulate, we will find a solution to beat them.”

The concept of manipulation and increased power is something that the current government has been accused of for some time. That is not to say that these allegations are unfounded. As can be seen in regard to the two bills that President Duda vetoed on judicial reform, “he eventually signed the judicial laws after cosmetic changes which gave him more say in nominating senior judges. But the amended laws still include a provision under which Supreme Court judges may be removed in the middle of their term,” writes Michał Broniatowski for Politico.