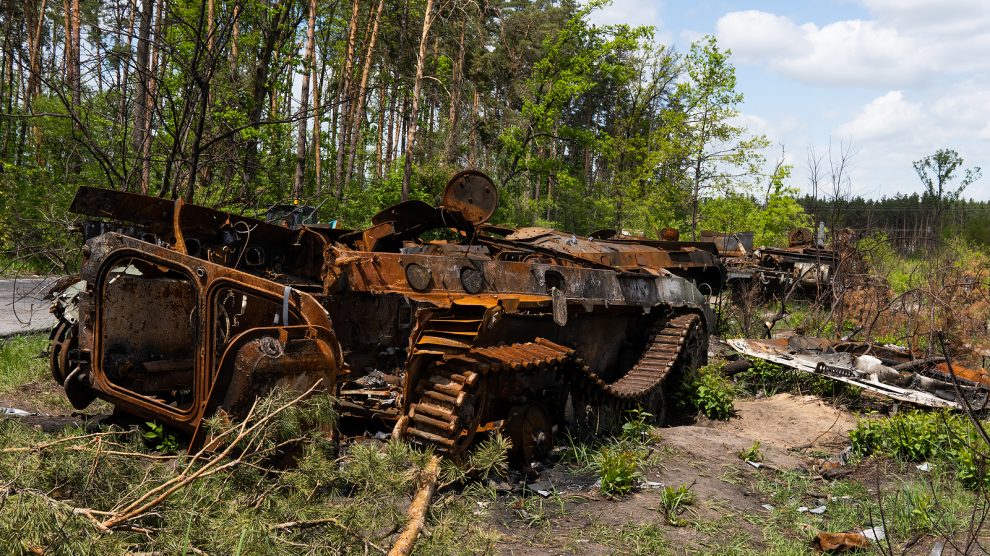 Ukraine’s armed forces this week liberated several towns and villages in the southern region of Kherson, hastening another Russian retreat.

President Volodymyr Zelensky said on Thursday that Ukraine’s military had made major, rapid advances against Russian forces in the past week, taking back dozens of towns in a region that Russia last week declared is now part of the Russian Federation.

Russia still controls Kherson, the regional capital, but its grip is looking increasingly shaky on the entire area north of the Dnieper River.

On Wednesday, Russian dictator Vladimir Putin appeared to admit that his forces had severe losses in Ukraine, conceding the severity of the Kremlin’s recent military reversals and insisting Russia would “stabilise” the situation in Kherson and the three other Ukrainian regions – Donetsk, Luhansk and Zaporizhzhia – it illegally annexed as its own territory last week.

“We are working on the assumption that the situation in the new territories will stabilise,” Putin said.

Russia’s foreign ministry on Wednesday said that the Zaporizhzhia nuclear power plant, Europe’s largest, would operate under the supervision of Russian agencies after the annexation.

Rafael Grossi, head of the International Atomic Energy Agency, is expected to visit Moscow in the coming days to discuss the situation at the plant, which has been occupied by Russian forces since the earliest days of the war.

The EU this week agreed to set a price cap on Russian oil and ban trade in numerous technical and consumer goods, as part of further sanctions designed to counter Moscow’s ability to wage war on Ukraine.

This latest round of sanctions, the eighth since the invasion began in February, were signed off by EU ambassadors on Wednesday, just a week after the measures were proposed.

Elon Musk has come under heavy criticism for proposing an end the war in Ukraine on terms favourable to Russia.

Musk made his arguments in a series of tweets that in addition to proposing Ukraine drop a bid to join NATO, said Russia should be allowed to keep the Crimean Peninsula, which it seized in 2014.

“I’m convinced that now our bid is much better than before. Football is universal, and if it is capable of changing the life of people in so many ways, it should also be used for doing good,” Rubiales continued.

Poland says it has asked to have US nuclear weapons based on its territory, amid growing fears that Vladimir Putin could resort to using nuclear arms in Ukraine to stave off a rout of his invading army. The request from the Polish president, Andrzej Duda, is widely seen as symbolic, as moving nuclear warheads closer to Russia would make them more vulnerable and less militarily useful, according to experts. Furthermore, the White House has said it had not received such a request.

Polish refiner PKN Orlen does not expect to be hit by the government’s planned windfall tax because it is carrying out investment important to Poland’s energy security, Chief Executive Daniel Obajtek said on Tuesday. Poland expects to raise 13.5 billion zlotys (2.77 billion US dollars) from a windfall tax on energy companies, the government announced in September. “Companies that have excess profit, I believe, should be taxed in this regard … but PKN Orlen does not have excess profit … I don’t see these [legislative proposals] as hitting Orlen very strongly,” Obajtek said.

Gazprom said on Tuesday it may switch off gas supplies to Moldova if the country fails to comply with its payment obligations by October 20. The Russian energy group also said it reserved the right to annul its gas supply contract with Moldova at any stage over its historical debts in a long-running dispute. Gazprom has threatened similar moves before amid political tensions between Moscow and an avowedly pro-Western government in Chișinău.

GERB, a nominally centre-right party led by a controversial former prime minister, Boyko Borissov, emerged as the largest party following Bulgaria’s fourth parliamentary election in less than two years.  The party, which has become a byword for systematic corruption, nevertheless took more than 25 per cent of the vote, followed by the We Continue the Change (PP) party of another former prime minister, Kiril Petkov, on 20 per cent. It is unlikely that Borissov will be able to form a government, however, making yet another election a real possibility.

Latvia’s ruling centre-right party won the most votes in the country’s general election, centrist parties were the runners-up and pro-Moscow parties crashed in a vote that was shaped by Russia’s war in Ukraine. With over 99 per cent of the votes counted, Prime Minister Krišjānis Kariņš’ New Unity party had captured 19 per cent support, while the opposition Greens and Farmers Union was second with 12.5 per cent and the new centrist electoral alliance United List — made up of several regional parties — was third with 10.9 per cent. The results put Kariņš in a strong position to head another coalition government.

Two of the three seats in the ethnically partitioned Bosnian presidency were won by moderates over more ethno-nationalist candidates in elections last Sunday. Incumbent Bakir Izetbegović was comprehensively defeated for the Bosniak seat by Denis Bećirović, a joint candidate representing almost a dozen mostly liberal and centrist parties, while Croatians will be continue to be represented by Željko Komšić, a veteran social democrat. Serbs will be represented by Željka Cvijanović, a hardline nationalist and ally of Milorad Dodik, who was re-elected president of the Serb-dominated Republika Srpska.

The leaders of Hungary, Austria and Serbia met on Monday in Budapest to find solutions on how to stem the increasing number of migrants arriving in Europe, among them many young men from India. The three leaders agreed to take joint action to control the new arrivals along the migration route that leads through Serbia. Austrian Chancellor Karl Nehammer told reporters after the meeting that the joint action plan would include increased police cooperation along the borders as well as supporting Serbia when it comes to deporting migrants back to their home countries.

The Slovenian parliament on Tuesday passed an amendment allowing same-sex couples to marry and adopt after a constitutional court ruling made it the first country in emerging Europe to do so. The family law amendment was passed by 48 MPs, with 29 against and one abstaining. In July, Slovenia’s highest court ruled that the law defining marriage as only between a man and a woman discriminated against gay and lesbian couples.