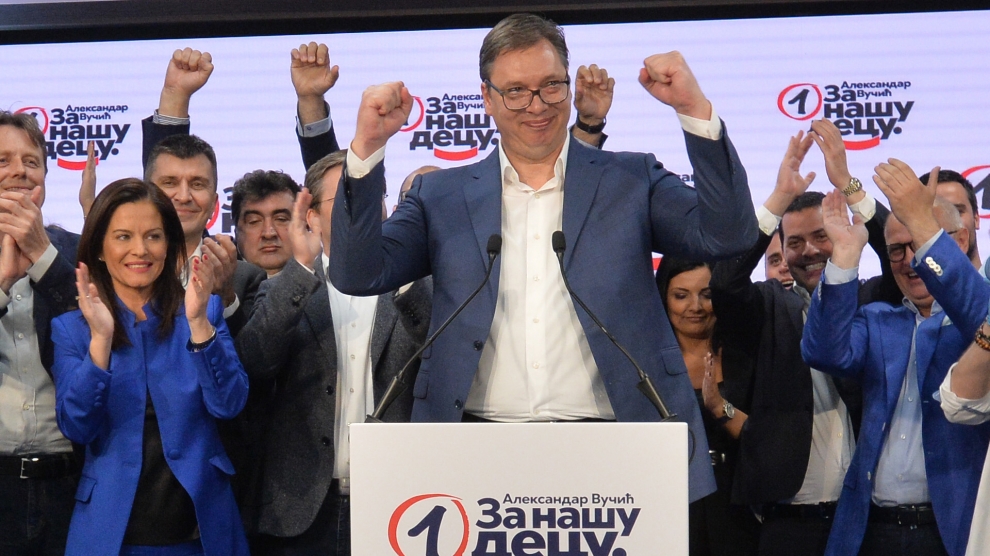 Serbia’s ruling Progressive party (SNS) has taken 62.6 per cent of the vote in a parliamentary election, giving it a clear majority of some 190 seats.

The elections were held amidst a still ongoing Covid-19 pandemic, as well as calls for boycott by some opposition parties, including the Democratic Party (DS) – the largest opposition party in Serbia.

Besides the SNS, only two other parties managed to clear the three per cent threshold required to enter parliament – the Serbian Socialist party (SPS), which took 10.9 per cent of the vote, and the Serbian Salvation party (SPAS) with 4.2 per cent. In addition, around 17 seats will be filled by representatives from Serbia’s ethnic minorities, for whom the threshold does not apply.

The defining feature of the new parliament will be a complete lack of opposition. While the SNS now has enough seats to form a government by itself, SPAS leader Aleksandar Šapić has said he is open to conversation. The SPS has in the past entered coalition agreements with ruling parties and may also be keen to do so once again. Should the three parties agree a deal, Serbia will in effect have no parliamentary opposition to the government, given that none of the opposition parties which ran in the election, such as the Movement of Free Citizens (PSG) and It’s Enough (DJB) cleared the three per cent threshold.

Turnout in the election is proving to be a point of contention, with SNS claiming more than 50 per cent of the electorate voted while other estimates, such as that from the Centre for Research Transparency and Accountability (CRTA), an independent watchdog, place the turnout at around 49 per cent.

Raša Nedeljkov, CRTA programme director, told local media that these elections were the worst of all those that CRTA has monitored since 2016, with the number of irregularities and incidents increasing twofold compared to four years ago.

“These elections fulfill minimal democratic standards, but they jeopardise democracy as each next [election] will be worse,” Mr Nedeljkov said.

Compared to the 56.07 per cent turnout in the 2016, all current estimates are low, leading the Alliance for Serbia (SzS) – a group of opposotion parties which did not participate – to declare that their boycott campaign had been successful.

Dragan Đilas, the President of SzS and, and former mayor of Belgrade, said at a press conference that the new government will not be legitimate and that the European Union must make sure the elections in Serbia are fair.

Opposition parties who boycotted the elections cited a lack of open and fair electoral conditions, especially when it came to the ruling party’s stranglehold on the media and Aleksandar Vučić making use of his role as president during the campaign.

The absence of opposition from the new parliament has worried some international commentators.

“The EU can’t pretend that today’s farce of an election didn’t happen in Serbia,” said professor Florian Bieber, a Balkans expert at the University of Graz.

Meanwhile, Mr Vučić has been celebrating his party’s victory, calling the elections “a historic moment for SNS.”

“We’ve won everywhere, even where we were losing before,” he said.

According to preliminary results, SNS managed to win in Paraćin and Šabac, the only two cities that have previously not had SNS-led local governments.

Mr Vučić announced prior to the election that there will be significant changes in the government, but it is currently unknown who will take the post of prime minister. Current Finance Minister Siniša Mali has been mentioned as a possible candidate, while there is also a chance that current PM Ana Brnabić will keep her job.

The next challenge for President Vučić will be a US-brokered Kosovo-Serbia summit at the White House, set to take place on June 27.

Romania’s conservatives take an axe to gender equality and sex education
High speed rail link to lift Baltic economies by up to 0.6 per cent
Comment