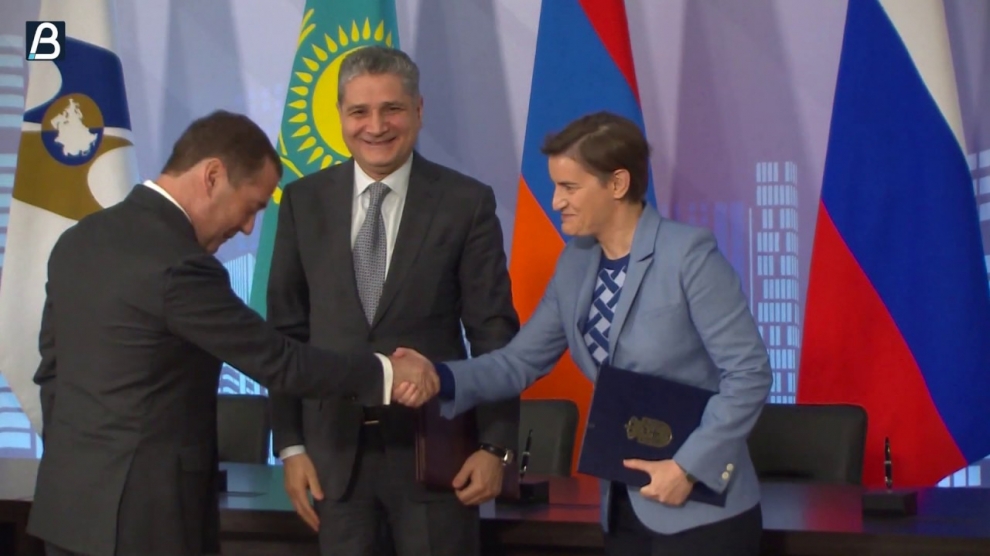 Serbia’s prime minister, Ana Brnabić, has signed a free trade agreement with the Eurasian Economic Union (EAEU), a Russian-led economic alliance of Armenia, Belarus, Iran, Kazakhstan and Kyrgyzstan, a move which is likely increase tension with the EU, the Serbian press has reported.

Speaking at the signing ceremony in Moscow on October 25, Mrs Brnabić said that the free trade deal “was in no way contrary” to her country’s European integration process. “This is complementary to our European policies and our EU path. Because it is in the EU’s interest to have an economically stronger Serbia, a free trade agreement with the EAEU will provide us those chances,” wrote Balkan Insight, quoting the Serbian PM.

“We should bear in mind that around 83 per cent of our total foreign trade exchange with the EAEU countries is with the Russian Federation, which is why having this unified agreement is so significant for us,” Serbia’s trade minister, Rasim Ljajić told the Serbian press prior to signing the deal.

The European Union is by far Serbia’s largest trading partner, accounting for 63 per cent of trade while Russia’s share remains below 10 per cent.

The signing of the agreement comes after the EU has repeatedly asked Serbia to reconsider its position, taking the country’s ongoing accession negotiations into account.

“Serbia can enter into agreements with other countries or organisations before joining the EU. However, in the context of the accession negotiations, Serbia has pledged to withdraw from all bilateral trade agreements on the day of EU accession,” the European Commission said in September.

During a visit to Belgrade on October 19, Russian Prime Minister Dmitry Medvedev also praised Serbia for not siding with the EU on imposing sanctions against Russia over its actions in eastern Ukraine.