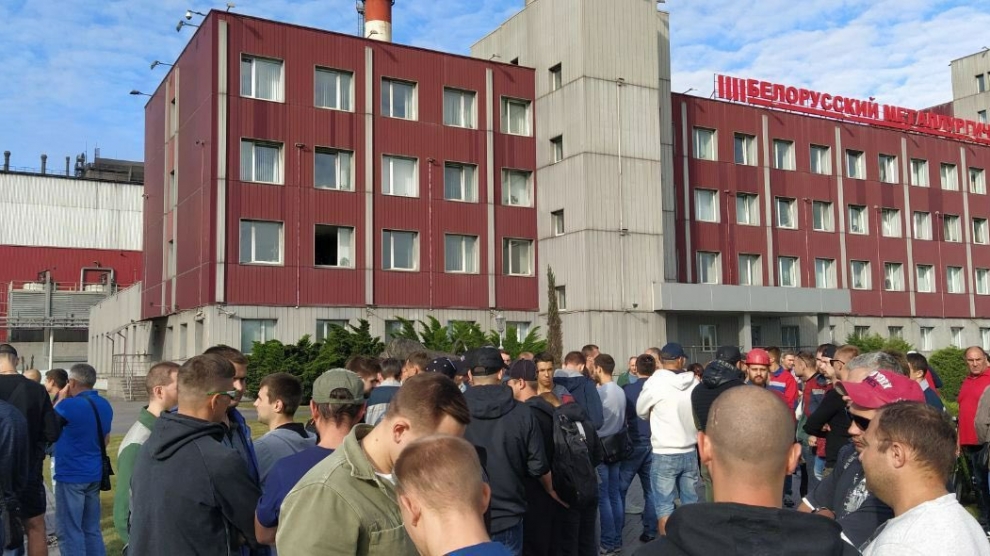 Workers at some of the largest companies in Belarus once again came out on strike on the morning of August 14, joining the many thousands of protesters who are now permanently stationed in the streets of the country’s towns and cities. Construction workers in Minsk and engineers at the country’s oil refinery, Naftan, joined the strike for the first time.

“Nationwide strikes frighten the authorities,” says Franak Viačorka, a Belarusian journalist. “They know that these guys cannot be shot or put in jail like young protesters. The largest state giants such as Hrodna-Azot or BelAZ support the protests. When thousands of these guys stop working — the economy could collapse.”

The protests – now in their sixth day – are directed at the country’s president, Alexander Lukashenko, officially declared the winner of a flawed presidential election held on August 9 in which he was credited with an implausible 80 per cent of the vote. The main opposition candidate, Svetlana Tikhanovskaya, forced into exile in Lithuania earlier this week following threats to her husband and children, was officially credited with just 10 per cent. At the few polling stations where vote counting was carried out correctly, Mrs Tikhanovskaya was a clear winner, taking between 60 and 70 per cent.

While Mr Lukashenko has not made any public statements since August 10, when he laughably thanked Belarussians for backing him and called the protesters “foreign-backed hooligans”, his interior minister, Yuri Karayev, appeared on television on August 13 and said that he takes responsibility for injuries to passers-by who had been caught up in the protests.

“As a commander, I want to take responsibility for these people and apologise to them,” the minister said. He did not, however, apologise for the brutality of security forces towards the more than 7,000 peaceful protesters who had been beaten, arrested, and remain in the country’s jails. His deputy, Alexander Barsukov, later told reporters outside the Okrestina detention centre in the capital, Minsk: “We will release everyone by 6am.”

At the time of writing, they had not.

The authorities did, however, release several hundred political prisoners shortly after Mr Karayev’s statement, mainly women. The head of the Belarus National State Council, Natalya Kochanova, stipulated however that those who had been freed now had an obligation not to take part in further “unsanctioned” events.

All of the released protesters had harrowing stories to tell of how they had been tortured while in detention. One woman said that she had been beaten, stripped naked while prison guards took videos of her, and threatened with rape. One man was beaten in front of his young daughter. Many of those released had visible problems walking due to the severity of the beatings they had received, and several were in such a bad state that they were taken by ambulance direct from jail to hospital. No medical treatment had been made available while in prison, and very little water and almost no food had been given to them. As many as 60 detainees were kept in cells that usually house just four prisoners, forcing them to lie on top of one another.

“They have remarkably inhuman hate of their fellow Belarusians,” he said.

Amnesty International confirmed that detainees had been tortured.

“Former detainees told us that detention centres have become torture chambers, where protesters are forced to lie in the dirt while police kick and beat them with truncheons,” said Marie Struthers, Amnesty International’s director for Eastern Europe and Central Asia. “They described being stripped naked and subjected to sadistic beatings while listening to the screams of other victims.”

Mr Karayev’s limited apology and the release of some prisoners came as European nations continued to condemn the police violence. Ambassadors from European Union countries on Thursday laid flowers in Minsk, at the site where one protester had been killed.

“We are here to mourn the loss of life and also to show solidarity with the victims of the violence and abuse that has taken place over many Belarusian towns and cities over the last few days,” EU envoy Dirk Schuebel told reporters afterwards.

The European Union is today set to discuss possible sanctions against the Belarusian leadership.

Protests on the evening of August 13 were the largest so far, marked by a noticeably reduced police presence. There were few new arrests, suggesting that security forces are now less willing to keep Mr Lukashenko in office through the use of brute force.

Earlier in the day, tens of thousands of people – mainly women – had formed human chains in Minsk and other cities, many wearing white and holding flowers and balloons, to protest against the police brutality of previous evenings.

Demonstrators held placards reading “Change!” and “No violence” and wore white bracelets, one of the symbols of the opposition movement.

From watchdogs to lapdogs: The slow decay of media freedom in Hungary and Poland
Second lockdown would be disastrous for CEE economy, economists warn
Comment