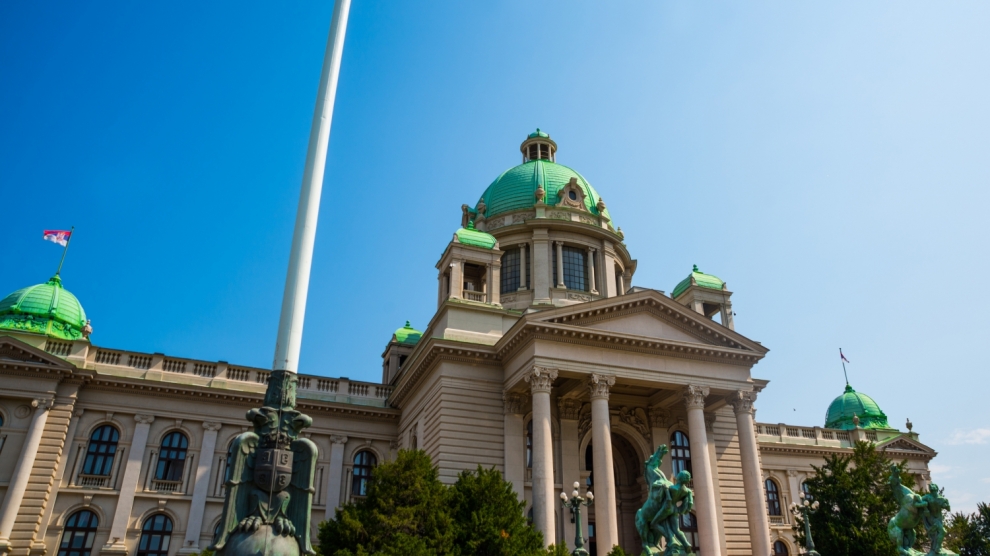 Serbia’s parliament met on April 28, the first session since the country declared a state of emergency on March 15.

A minute of silence opened the session, dedicated to those who have lost their lives from Covid-19.

Before the session, MPs, officials and assembled reporters were screened by a medical team which measured their temperature. There were also several disinfection checkpoints.

In the hall itself, MPs wore masks and gloves, and protective plexiglass partitions were installed as a further safety measure.

The first point of order was for parliament to confirm the decision to declare a state of emergency, which has proven controversial as many opposition politicians have pointed out that the way in which the state of emergency was enacted may not be constitutional.

The rationale was that a law barring congregations of more than 50 people made a National Assembly session impossible.

Some members of the opposition have gone so far as accusing President Vučić of staging a coup. Marinika Tepić, the vice president of the Party of Liberty and Justice, said that the ruling party has “staged two coups in one month.”

“It’s clear that behind the state of emergency there is an intent of the obsessive government to legalise lawlessness,” she said.

Members of the largest opposition organisation, Alliance for Serbia (SzS), were not present at the session, after agreeing not to attend.

Some of the SZS’s members were present in the parliament building, but not in the meeting hall itself.

A number of SzS MPs assembled briefly in the front of the parliament building to announce a protest planned for April 30, which will start at 6pm, at the same time as a nationwide curfew, declared as part of the state of emergency, which will run for 83-hours, ending on the morning of May 4.

The curfew covers May 1, International Worker’s Day, traditionally celebrated in Serbia by open air gatherings of friends and family. The curfew is similar to the one enacted over Easter Sunday in a bid to stop the virus from spreading during a holiday when people usually gather in large groups.

Members of the 1 out of 5 Million Movement, also protested outside of the National Assembly, calling on the government to reverse its decision to impose another 83-hour curfew.

Opposition parties have also called on citizens to voice their disapproval by banging on pots and pans, in a reference to a protest in 2000 against former president Slobodan Milošević.

During the session itself, PM Ana Brnabić praised Serbia’s response to the Covid-19 pandemic. She said that the measures taken by the government had been timely, smart, and effective.

“For the beginning we had two goals, first to protect the healthcare system and second, to protect the lives of our eldest citizens and chronic patients. We can see now that we’re on the downward path [of the epidemic], but we cannot declare victory over the virus yet, but we think that will be soon,” she said.

The prime minster has also announced an epidemiological study of infection rates beginning on May 4, conducted by the Faculty of Medicine of Belgrade University on a sample of 7,000 households.

Currently, there are 8,497 confirmed cases of Covid-19 in Serbia, while the death count has climbed to 168.

Serbia began relaxing its lockdown earlier this week. Parks and promenades reopened on April 28, while public transport is set to resume and shopping malls will open from May 8. Air travel is expected to resume from May 18.

Governments in Eastern Europe and Central Asia increasingly using Covid-19 as an excuse to clamp down on opposition, claims Amnesty
Lithuania allows bars, cafés and restaurants to reopen outside seating areas
Comment