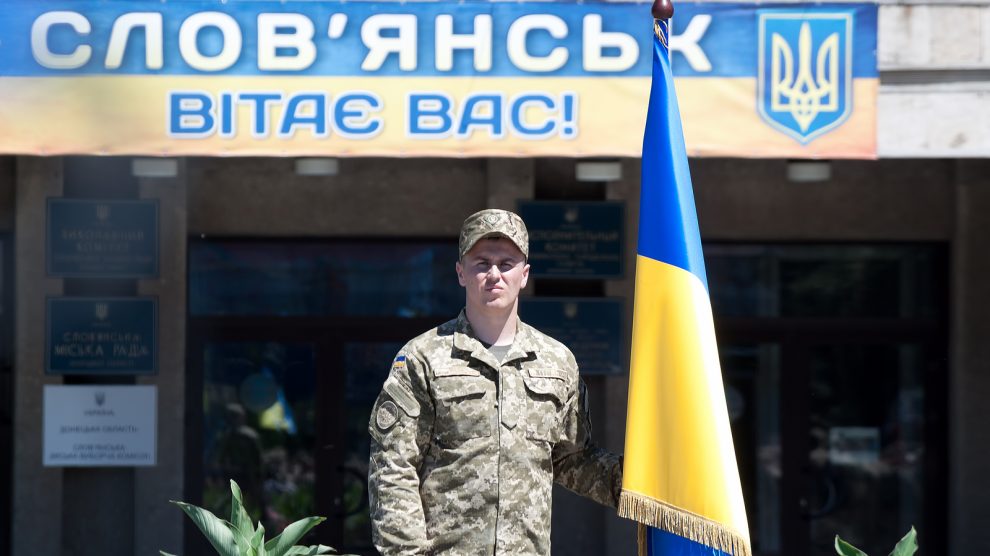 Ukraine’s president, Volodymyr Zelensky, said on Thursday that heavy weapons from western allies have finally begun working at “full capacity” on the frontlines. In his nightly video address, Zelensky said the Ukrainian military has been able to target Russian warehouses and locations that are “important for logistics”.

British intelligence meanwhile said on Thursday that the battle for Sloviansk is likely to be the next key contest in the struggle for Donbas as Russian forces approach to within 16 kilometres of the Donetsk town. On Wednesday, at least two people were killed and seven more were injured by a Russian strike on the city’s main market. Last weekend, Russia took full control of the neighbouring Luhansk region after taking over Lysychansk, the last Ukrainian-controlled city in the region.

Ukraine this week rejected the claim that Russian forces destroyed two advanced US-made Himars rocket systems and their ammunition depots. Ukraine’s general staff said the claims by Russia’s defence ministry were fake and that it was using the US-supplied Himars to inflict “devastating blows” on Russian forces.

Ukraine’s foreign ministry said on Thursday a Russian ship carrying Ukrainian grain had been allowed to leave the Turkish port of Karasu, calling it an “unacceptable situation” and summoning Turkey’s ambassador. “We regret that Russia’s ship Zhibek Zholy, which was full of stolen Ukrainian grain, was allowed to leave Karasu port despite criminal evidence presented to the Turkish authorities,” foreign ministry spokesperson Oleg Nikolenko. Turkey had halted the ship on Monday in response to a Ukrainian request, claiming that it was transporting stolen grain.

Authorities in Odesa reported on Thursday that grain silos in the region and Snake Island have been hit by rockets or missiles overnight. An official channel for Odesa stated that two rockets hit two agricultural hangars at night, which were destroyed. About 35 tonnes of grain were stored in one of them. Then, at dawn, during the aerial overflight and reconnaissance of Zmiinyi [Snake Island], the island was attacked by two air-launched missiles.

On Wednesday, Ukraine’s grain traders union revised upwards its forecast for the grain and oilseed harvest to 69.4 million tonnes from the previous 66.5 million, but still far below the 2021 level of 106 million tonnes. Meanwhile, Ukraine’s grain exports plunged 68.5 per cent year-on-year to 163,000 tonnes in the first six days of July, the agriculture ministry said on Thursday. Also on Thursday, Romania reopened a Soviet-era rail link connecting its Danube River port of Galați to Ukraine a month earlier than expected to help boost vital grain exports from its neighbour.

More than 8.79 million people have crossed the border from Ukraine since Russia’s invasion began in late February, the UN refugee agency said on Wednesday.

At least 47 police officers have been injured in the North Macedonian capital of Skopje during protests against the government’s concessions on ethnic rights as part of EU accession talks, according to news agency Makfax that cited the police. Wednesday’s report said that two of the 47 officers were seriously injured in the Tuesday protests. Eleven protesters were arrested. Nationalist opposition party VMRO-DPMNE had called for the protests, enraged because of concessions to Bulgaria amid the EU accession process.

Hungary’s biggest interest rate increase since 2008 failed to stem the forint’s plunge as policy makers sought to support the weakest currency in emerging markets. The central bank increased the one-week deposit rate by 200 basis points on Thursday to 9.75 per cent, by far the highest level in the European Union. But the forint quickly erased initial gains to drop 1.3 per cent against the euro, taking its losses to almost 13 per cent since Russia invaded Ukraine in February.

Latvia is to reinstate compulsory military service amid growing tension with Russia in the wake of Moscow’s invasion of Ukraine. “The current military system of Latvia has reached its limit. Meanwhile, we have no reason to think that Russia will change its behaviour,” the Latvian defence minister, Artis Pabriks, told reporters on Tuesday. Latvia had scrapped mandatory service a few years after joining the Nato military alliance.

Kazakh President Kassym-Jomart Tokayev on Thursday told his government to diversify its oil supply routes, a day after a Russian court ordered the Caspian Pipeline Consortium to suspend activity for 30 days. A halt to the pipeline, which carries oil from Kazakhstan’s vast Tengiz Field across Russia to the Black Sea, would strain the oil market just as it faces one of the worst supply crunches since the Arab oil embargo in the 1970s.

Poland’s prime minister on Wednesday accused Russian agencies of hacking into government systems and manipulating and leaking emails that allegedly expose his administration’s links with the judiciary. Premier Mateusz Morawiecki labeled the leaks a “provocation” by Russian and Belarusian secret services aiming to sow discord in Poland in revenge for Warsaw’s support for Ukraine amid Russia’s invasion.

The Polish cabinet has adopted legislation easing rules on the development of wind farms, as the country aims to boost its installed capacity and diversify energy supplies. Wind development in Poland has been stalled since 2016 by rules that require a minimum distance of 10 times the height of an onshore wind power plant between the farm and residential buildings, in practice blocking new projects. Under the revised rules, a minimum distance between a wind farm and a residential building would be set at 500 metres.

Albanian Prime Minister Edi Rama said on Monday in the Netherlands that Shell “might” have made an important oil discovery in the south of the country. “There are signs that show that we might be near a very important discovery of oil and gas that will have a large impact not only on the future of our country but will play a role even in the future of energy in Europe,” Rama said. Since the collapse of communism in 1991, several foreign companies have spent large sums searching for oil on shore and off shore in Albania – without much result.

Turkey and Armenia have agreed to partially open their mutual land border, which has been closed for nearly three decades. The two countries announced, in identical statements, that they had agreed to “enable the crossing of the land border between Armenia and Turkey by third-country citizens visiting Armenia and Turkey respectively at the earliest date possible.” The border has been closed since 1993, when Turkey closed it in support of Azerbaijan during the first war over Nagorno-Karabakh.