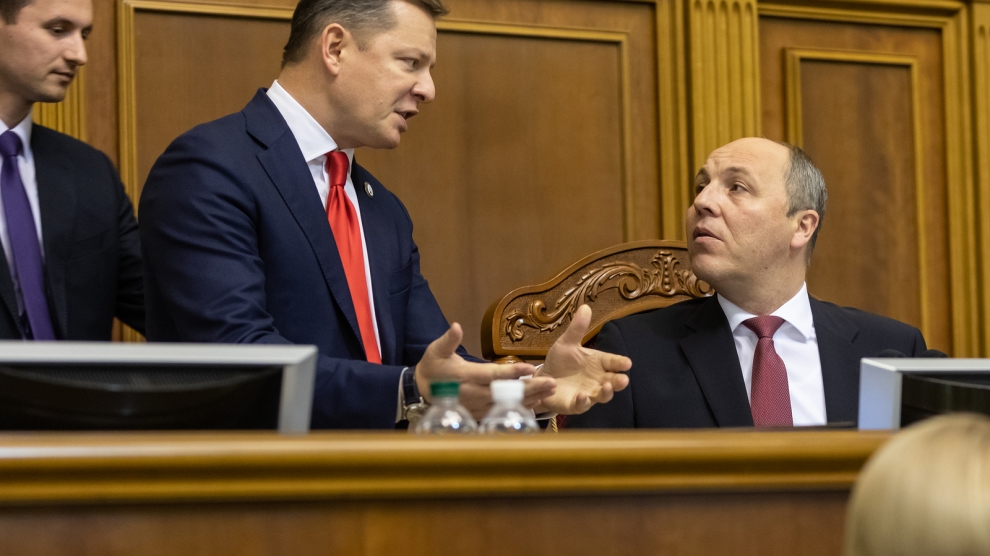 The Servant of the People Party, led by Ukrainian president Volodymyr Zelensky, has presented its lead candidates for Ukraine’s snap parliamentary elections on July 21.

The list is headed by party chairman Dmitry Razumkov, Ukrainian parliamentary envoy Ruslan Stefanchuk and Iryna Venediktova, the party’s judiciary expert, while the majority of the remaining top candidates are mostly party officials or policy experts.

The Ukrainian Strategy Party of prime minister Volodymyr Groysman introduced its lead candidates on June 7, most of whom are members of the government, including justice minister Pavlo Petrenko, education minister Lili Hryvnevich and culture minister Yevhen Nyshchuk.

The party of former Georgian president Mikheil Saakashvili, the Movement of New Forces, rejected the offer of Kyiv mayor Vitaly Klitschko to chair his UDAR party and combine forces for the election.

According to the latest opinion poll published by the Rating Sociological group June 5, five parties would pass the five per cent threshold to gain seats in the Verkhovna Rada, Ukraine’s parliament. Mr Zelensky’s party is projected to win the election with an overwhelming 48.2 per cent of the vote. The pro-Russian Opposition Platform – For Life Party would come in second with 10.7 per cent of the votes while Mr Poroshenko’s European Solidarity Party would receive 7.8 per cent. The Batkivshchyna Party led by former PM Yulia Tymoshenko would get 6.8 per cent of the votes, while the Voice Party of Ukrainian rock singer Svyatoslav Vakarchuk would receive 5.6 per cent.