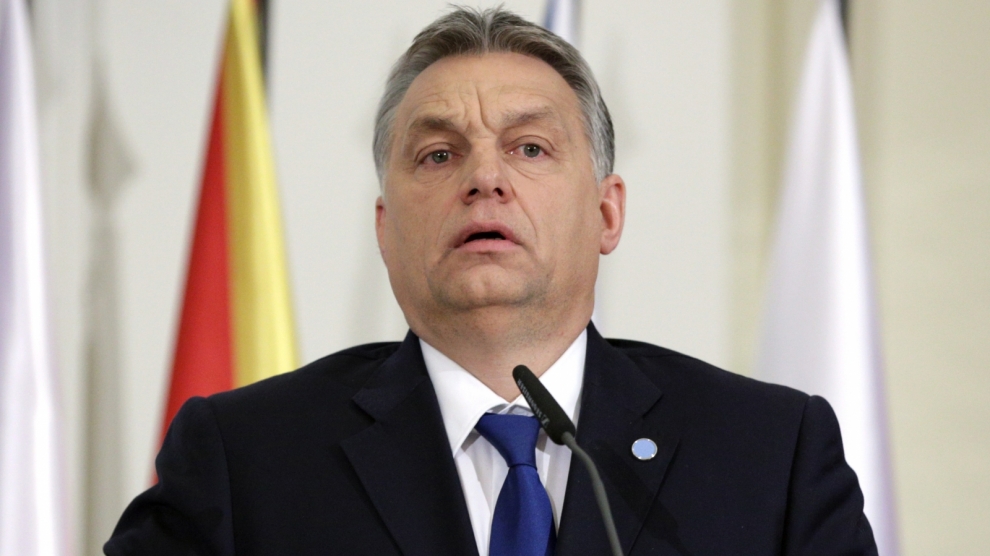 Hungary’s prime minister Viktor Orbán has a long history of avoiding questions from independent media outlets. Using the playbook of US President Donald Trump, he has a number of times railed against reporters critical of his government, calling their outlets “fake news”.

From time to time however, Mr Orbán demonstrates that he is not just willing, but also happy to answer any questions from independent reporters, most notably during his now annual press conference to which every Hungarian and international journalist based in Budapest is invited. (Almost: 24.hu, the third most popular news website in the country, read by one million people a day, and Direkt36, a highly acknowledged investigative journalist unit weren’t allowed to enter).

This year, Mr Orbán touched on a number of areas, ranging from the next general election in 2022 to his party’s position in European politics, as well as migration, healthcare, climate change and the economy.

Here are three key takeaways from what he had to say at the conference, held on January 9.

1. He wants to be reelected prime minister

Hardly a surprise, the Hungarian PM told reporters that he stood ready to run for prime minister during the country’s next parliamentary elections in 2022.

His words came as internal pressure within his party, Fidesz, has grown following major opposition gains in the Hungarian local elections last October and the fact that the ruling party has been unable to reach young voters.

“If Fidesz returns to the way of understanding realities, it will be able to regain the trust of the electorate,” said Lázár János, a former influential minister in Mr Orbán’s government who was sidelined within the party and has repeatedly been critical of Fidesz, but not the Hungarian PM himself.

“My way of thinking (…) does not belong to the mainstream of the current Fidesz,” Navracsics Tibor, Hungary’s former EU commissioner, who was nominated by Mr Orbán, said on January 8, arguing that 2020 will decide if the ruling party will understand why voters are disillusioned.

These are just two of the many Fidesz politicians or close-to-Fidesz figures who have been openly discussing internal party politics, something that has been so far unprecedented under Mr Orbán.

Although these figures are seen as internal opposition within Fidesz, they are unlikely to challenge the Hungarian strongman, while Mr Orbán himself said that he would be counting on them in the future.

“Fidesz can be fixed,” Mr Orbán said, acknowledging that his party has been losing momentum.

The Hungarian PM had started his press conference by reiterating his main political agenda, pointing to a “clan run by George Soros” and “historical tension between pro-migration and anti-migration forces” which he said continues to dominate the European agenda.

Realising that the anti-migration propaganda will no longer be enough for reelection, however, the Hungarian PM also announced other notable goals and measures, including eliminating poverty and carrying out healthcare reform, with the latter being the most complicated issue in the country, one that has remained largely untouched by previous governments.

2. The Hungarian government will go green, but continues to label actual greens as hypocrites

Despite Hungary’s initial veto on the European Union’s plans to achieve climate neutrality by 2050, Mr Orbán eventually endorsed a similar initiative during the last European Council.

To contain the fallout the ruling party has been suffering for not taking climate change as a serious threat, Mr Orbán spent much of his time building a case for his pro-environmentalist stance. According to him, the price of climate change has to be paid by polluters and “poor countries” such as Hungary should not be the ones paying this heavy price. He also promised to eliminate illegal dumping sites in the country and promised to renew the country’s public bus transportation system in a way that would include electric vehicles only.

The Hungarian PM estimates that around 50,000 billion forints (more than 150 billion euros) are needed for Hungary to achieve carbon neutrality by 2050, as envisaged by the European Green Deal of EU Commission President Ursula von der Leyen.

Negotiations are currently underway to decide on the EU’s next seven-year budget, a large share of which will be dedicated to green issues.

“Those, who believe that climate change is a communist scam, are not sane,” Mr Orbán in last October. His words didn’t stop many of his pro-government pundits and commentators, whose main talking point has been that the global movement to fight climate change was a pro-migration force that is communist in secret.

Responding to a question on the possibility of a conservative-green coalition after 2022, similar to that sworn in this week in Austria, Mr Orbán said that most of the Green politicians in Hungary were “watermelons: greens outside and reds inside.”

Opposition figures hit back at the Hungarian PM, arguing that his call is desperately late and impossible to believe given the anti-environmentalist stance of his supporters.

3. Fidesz will stay in the EPP, but will look to Poland if the party is expelled

Since Mr Orbán’s party was suspended from the European People’s Party (EPP), the alliance of European conservative parties and the largest bloc in the European Parliament, the Hungarian PM has been struggling to keep its EU-level influence and remain part of the conservative European family that has been wary of Fidesz’s undemocratic practices, corruption and attacks against the rule of law.

Mr Orbán said that he is not interested in the current version of the EPP as “it is losing influence, positions, because it is heading in the wrong – liberal, socialist and centrist – direction.”

If Fidesz is unable to rally his supporters within the EPP – which he himself admitted was still in doubt – it is most likely that it would rather quit than be formally expelled.

Other leading Fidesz politicians, including ruling party MEP Tamás Deutsch, continue to stress that it will be Fidesz that will decide its own fate, not other EPP members.

In reality, however, it will be the EPP’s member parties who will take a decision on the membership of Fidesz during the party’s next congress in February.

Donald Tusk, the EPP’s new president, has already hinted at expulsion unless Fidesz makes a gesture towards Europe and decides to abandon its autocratic policies, something which is rather unlikely to happen in practice.

Should Fidesz no longer be a member of the EPP, the party could join the eurosceptic European Conservatives and Reformists Group (ECR) led by Poland’s ruling Law and Justice party (PiS). On January 8, Mr Orbán sat down with PiS leader Jaroslaw Kaczyński in a meeting discussing EU-level political ties.

Croatia hopeful of reviving Albania and North Macedonia’s EU dream
Some of emerging Europe’s citizens are increasingly free to travel, others less so
Comment