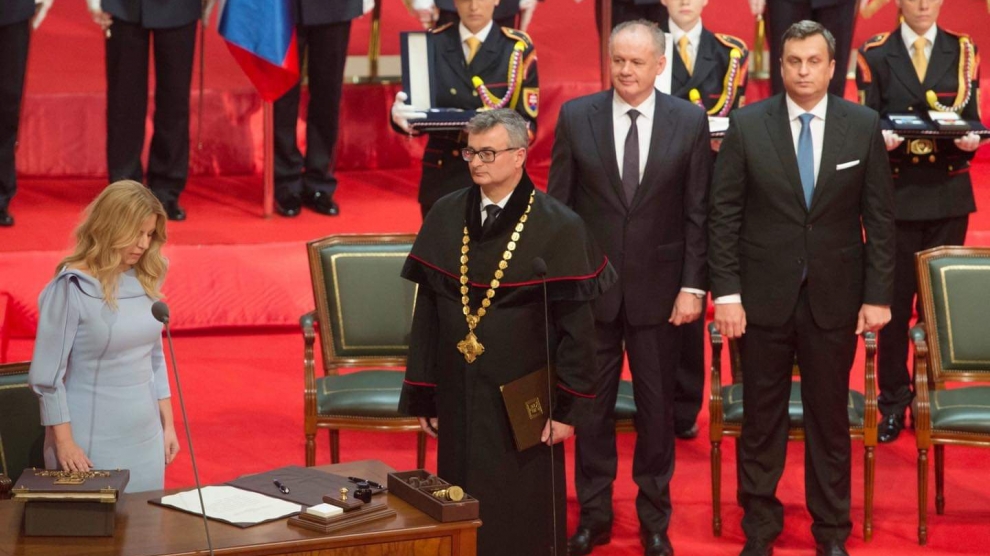 Anti-corruption activist and environmental campaigner Zuzana Čaputová has been sworn in as Slovakia’s first female president.

“I’m not here to rule, I’m here to serve,” Mrs Čaputová said in her inauguration speech.

Mrs Čaputová’s election made international headlines given her liberal stance which placed her in stark contrast to Slovakia’s neighbours, which have in recent years shifted towards populism and nationalism.

“I consider the services that I have committed myself to as a responsibility. The responsibility for proper and constitutional performance of powers, but also as the responsibility for something more fragile, that all of us holding public posts must try for. And that is trust. The trust of citizens in us, the people that they have elected, trust in institutions, in rules that are valid equally for all, trust in Slovakia, trust in the homeland,” she continued.

Mrs Čaputová won Slovakia’s presidential election in March, taking more than 58.4 per cent of the vote. Like her predecessor Andrej Kiska she firmly supports Slovakia’s membership of the European Union and NATO.

“Our EU and NATO membership is our free choice,” she underlined. “A small state in the middle of Europe couldn’t encounter a better fate than to belong to a community that espouses economic prosperity with social solidarity and expects every member state to adhere to the principles of international law. The fact that we are a part of the union is not just a matter of our prosperity, it is also an important contribution to our national sovereignty.”

Mrs Čaputová stressed the importance of values like humanity, solidarity and truth.

“Politics are no longer a sign of weakness. Today we have shown that they are a sign of strength,” she said.

“When I talk about us, about Slovakia, I must state that we are much more viable, much more vigorous than we often believe ourselves to be. We do not need to look back to the distant past. It is enough to remember what we have managed to do and the things we have overcome in just the last 30 years,” she added.

Her decision to run for the office came just after the murder last year of the reporter Ján Kuciak and his fiancée Martina Kušnírová. The murders led to the resignation of prime minister Robert Fico.

“I will perform my mandate freely, answering to the orders of nobody. The only orders that I want and will respect as the head of state, come from the constitution, and are dictated by my promise of fidelity to the republic. The feeling of injustice has grown stronger and has acquired two forms, the form of calling for a change and for decency, but also the form of anger about the ‘system’. We need to divert the energy of discontent so that Slovakia always remains a state within the rule of law, not just in its constitution, but also in reality,” she said.