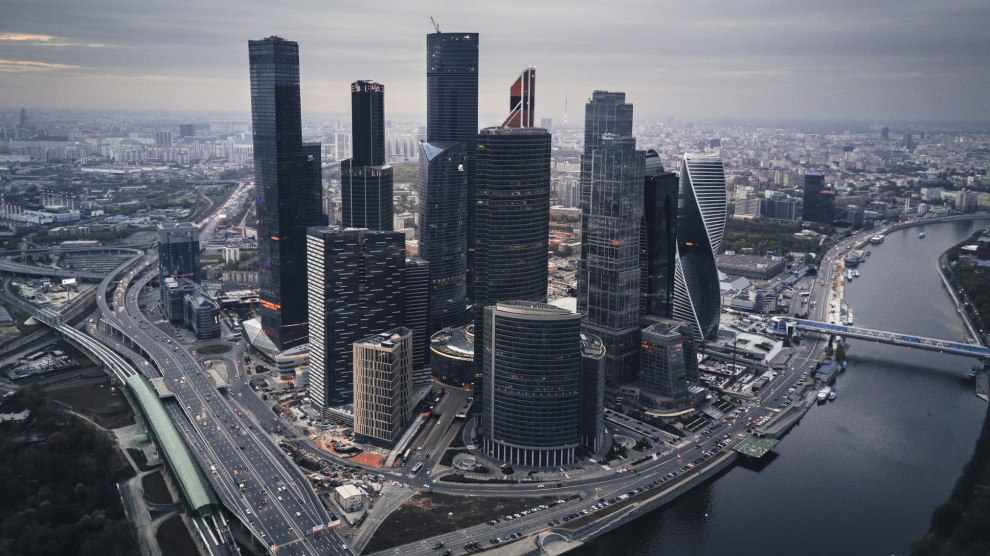 An oil price shock and the introduction of economic and financial sanctions led to a strong devaluation of the rouble and a recession in 2014-15. Since then, however, Russia has clearly regained financial strength. This is expressed in a surplus on both the current account of seven per cent of GDP and of the state budget of almost two per cent of GDP in 2018. This means that Russia is not only exporting more than the country is importing (which is traditionally the case given its strong export of natural resources of oil and gas), but also the government is receiving more revenues than it has expenditures.

The introduction of a budget rule limited the dependence on oil prices as extra oil and gas revenues are now “removed” from the economy. Consequently, international foreign exchange reserves held by the Russian Central Bank and fiscal buffers in the form of the National Wellbeing Fund (i.e. the Sovereign Wealth Fund of Russia) have recovered to high levels. FX reserves reached 530 billion US dollars, 50 per cent above its low point in 2015.

Interestingly, Russia has also partly shifted reserves from US dollar denominated holdings to the euro and even the Chinese currency, but also to holdings of gold reserves, which rose to an equivalent of 110 billion US dollars. The National Wellbeing Fund owned by the government is now worth over 120 billion US dollars and is expected to reach seven per cent of GDP soon. This is the formal threshold at which the government could start to partly use the funds.

At the same time the country has substantially reduced its foreign indebtedness and only this year the combined external debt of the private and public sector stopped shrinking and increased again to 480 billion US dollars. As such, Russia is in a favorable situation, with all foreign debt of private and public entities completely covered by foreign reserves. This has made Russia more resilient to new external shocks, for example another slump in the oil price or new sanctions.

Two sides to the story

However, there is a dark side of these gains in resilience and stability: economic growth and especially private consumption have underperformed in recent years. The volume of Russian GDP is just one per cent above the pre-recession level of five years ago. And private consumption is still more than five per cent below the level observed in mid-2014. Our GDP growth estimate for 2019 has been recently reduced to 1.2 per cent year-on-year. 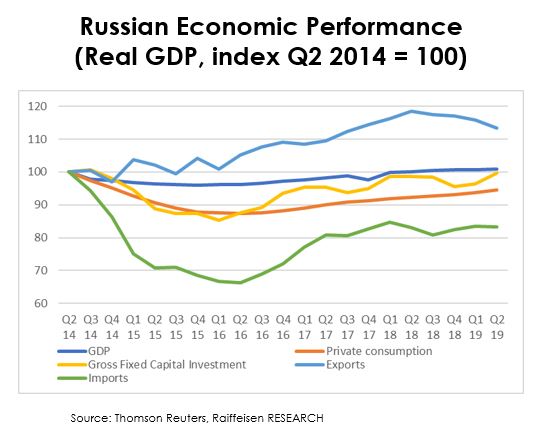 It is not surprising that the economic debate in Moscow has shifted from economic stabilisation to growth enhancing strategies. Here, the so called “National Projects”, which were proposed in 2018, play a major role.

The latter are mainly large-scale infrastructure projects, mainly funded by the Russian state, in the hope of kick-starting investment and therefore economic growth over the coming years. The overall volume of the programme over the next six years is set at 26 trillion roubles or around 400 billion US dollars, of which half may become effective as additional fiscal stimulus. However, we expect mixed results at best and do not estimate a strong positive net effect on economic growth, as at the same time the state budget is still planned to have a surplus. More likely, certain, supported industries will profit from the programme.

Finally, in contrast to global trends, Russian monetary policy remains comparably restrictive. Inflation is hovering between four and five per cent year-over-year, while the key interest rate is still higher, at seven per cent (with the prospect of being reduced by additional 50 basis points soon).

The real interest rate is still positive in the range of two to three per cent, much higher than in the euro area. Lending activity to consumers is strong, but given stagnating average disposable incomes, this poses also headaches for the authorities, who are concerned at the possible risks of over-lending to certain segments and thus are already slowing down retail lending.

Overall, while Russia is searching for the winning formula to unlock higher growth rates, we think that with the policies at hand growth rates between one to two per cent per year are more likely and therefore are our baseline scenario for the upcoming years.

This article was co-authored by Stanislav Murashov, executive vice president at the research department at Raiffeisenbank in Russia and first published at Discover CEE.

Andreas Schwabe, CFA, MBA, is Senior Economist for Central and Eastern Europe in the Economics Department at Raiffeisen Bank International in Vienna.

The Trojan Horse of Russia-Ukraine electricity imports
Business innovation and digital transformation: How to stay ahead of the game
Comment