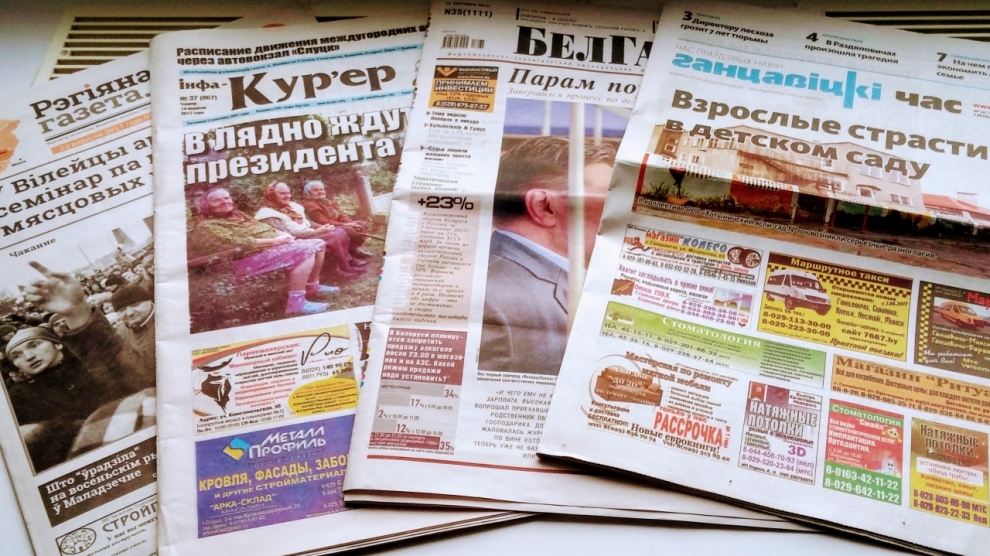 Belarus came in a lowly 153rd place (of 180) in Reporters Without Borders 2017 World Press Freedom Index. Other media freedom watchdogs and international organisations have reached similar conclusions: Belarus is ranked amongst the ten least free countries by Freedom House, although – credit where it’s due – it did move up from 194th last year to 192nd this year.

What do these rankings mean for journalists on the ground in Belarus however, in the context of a world in which 74 journalists have so far died this year, and hundreds of have been placed in custody?

Belarus stands out amongst other repressive states not by the number of journalists it targets, but simply by the suffocating degree of control the state places on the informational space. Having taken control over traditional media (publishing, radio and television), the state is trying to extend its reach online, the web remaining the last bastion of freedom for those looking to express opinions and disseminate information throughout Belarus.

Belarusian journalists do of course face real repression, often repeatedly. Previously, these have been in the form of criminal cases over libel in relation to the president, bringing sanctions from the Ministry of Information against the editorial boards of independent media outlets. In recent years journalists have also been detained and handed fines for contributing to foreign media outlets without first obtaining permission from the Foreign Ministry.

However, there has of late been an encouraging change in the way the state operates. If in the critical year of 2011 (when the presidential election was followed by a clampdown on democratic forces and civil society) journalists were detained a total of 167 times, the number decreased from year to year to reach just 13 in 2016.

But in the wake of mass protests launched in the spring of 2017, journalists have once again been targeted and detained in order to prevent the possibility of spreading news of the protests. As a result, the Belarusian Association of Journalists has recorded approximately a hundred detentions in the year to September.

Belarusian journalists are also again being fined for cooperating with the foreign media without approval. This practice was first used in 2014, and for two years, until April 2016, journalists were fined 48 times. Then, abruptly, the practice stopped, and for a year no journalists were fined. Since the spring of 2017 however, the practice has resumed. During the first nine months of 2017 courts imposed around 40 fines on journalists contributing to the foreign press (the amount of each fine is comparable with the average monthly salary in Belarus). What’s more, the reason for fining journalists to justice is not even the content of their pieces, but the very fact that they are being published in foreign media.

The detention of, and fines for, journalists are part of a broader dialogue regarding human rights between the Minsk government and the European Union. Both issues, however, could be solved with a minimum of political goodwill on the part of the Belarusian authorities. Other, chronic problems are more systemic.

These include the repressive nature of the mass media law and legislation on countering extremism, the excessive authority of the Ministry of Information to regulate sources of information, criminal prosecution for free expression, and the high impact of Russian media on the Belarusian audience.

The mass media law provides the Ministry of Information too wide a jurisdiction, from registering content producers and their distributors to initiating cases to shut down media outlets and the extrajudicial blocking of websites. In addition, the law restricts the rights of journalists and the possibility of foreign investment in the media arena.

These restrictions do not in all practicality apply to the Russian media. About 65 per cent of the programmes on Belarusian state television are based on those produced in Russia. As a result, 62 per cent of their audience adhere to pro-Kremlin positions (answering a question posed by sociologists, as to whether events in the Crimea represented the restoration of historical justice or annexation, they chose the first answer, despite the fact that the official position of the Belarusian authorities was different).

In December 2016, Belarusian bloggers Yury Paulavets, Dzmitry Alimkin and Syarhei Shyptsenka were arrested. Their publications on the Russian websites Regnum, Lenta.ru, and EADaily contained criticism of the Belarusian state and, according to the Belarusian authorities, could stir discord among the peoples of Russia and Belarus. Criminal cases against the three, under Article 130 of the Criminal Code (Incitement to racial, national, religious, or other social hostility or discord) were initiated by the Ministry of Information on the basis of a ruling from the National Expert Commission on Extremism (itself part of the Ministry of Information) stating that some of their articles contained incitement to hatred.

Some Belarusians supported the authorities, while others see the arrests as a threat to all journalists, regardless of their position. “What these three bloggers wrote could be considered controversial, but that does not justify their imprisonment,” said Johann Bihr, the head of Reporters Without Borders’ Eastern Europe and Central Asia desk. “According to international standards, their provisional detention is neither necessary nor proportionate.”

Before the detention of the three bloggers, in October 2016, another blogger, Eduard Palchys, the founder of the 1863x.com blog (on which he sharply criticised Russia’s actions in Ukraine), was sentenced under the same law.

Andrei Bastunets is a vastly experienced journalist who is currently the chairperson of the Belarusian Association of Journalists.