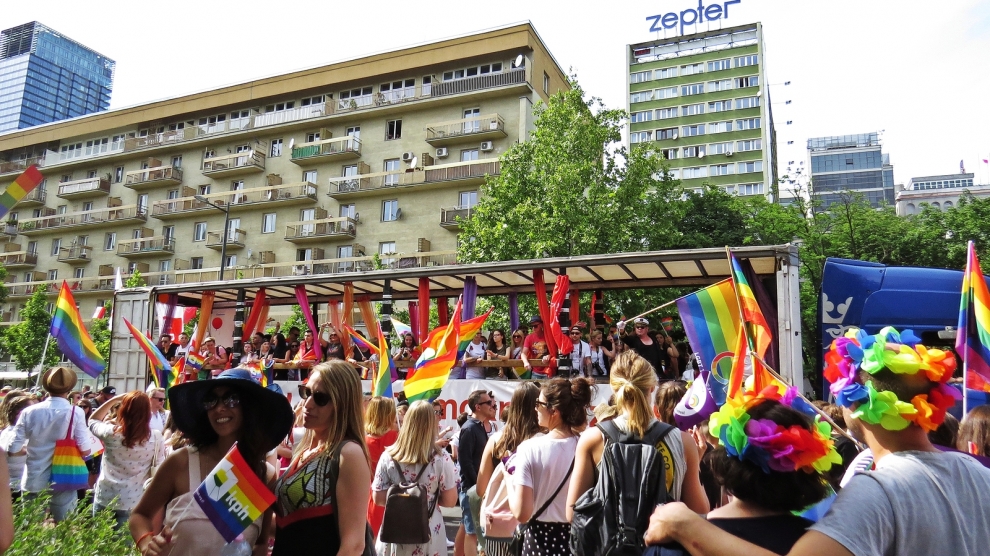 The LGBT (lesbian, gay, bisexual and transgender) issue has been one of the main sources of political controversy in Poland over the summer months, and is potentially one of the most important and consequential since the collapse of communism in 1989. Some commentators have accused the ruling right-wing Law and Justice (PiS) party of trying to use the issue cynically as a pretext to create an atmosphere of moral panic in order to shore up its electoral base among more conservative Poles. They draw analogies with the way that the party opposed the EU’s compulsory migrant relocation scheme in the run-up to the previous 2015 election, when Law and Justice argued that Muslim migrants from the Middle East and North Africa would be difficult to assimilate and threatened Poland’s national security.

In fact, although Law and Justice is strongly culturally conservative, it has often been extremely wary of giving moral-cultural issues too high a profile for fear of putting off more centrist, socially liberal voters who might otherwise be attracted by the party’s socio-economic policies. A good example of this is the abortion issue where Law and Justice has proceeded very cautiously, knowing that while the party’s leaders and core supporters favour a near-total ban most of its voters support the (already very restrictive) status quo.

Indeed, it was actually the opposition that first raised the profile of the LGBT issue when, in February, Warsaw mayor Rafał Trzaskowski – who was elected last October as the candidate of the liberal-centrist Civic Platform (PO), Poland’s ruling party between 2007-15 and currently the main opposition grouping – published a 12-point charter prepared in co-operation with the city’s sexual minorities activist groups. Most controversially, the ‘LGBT plus’ rights declaration included a proposal to introduce a comprehensive, LGBT-approved sex and anti-discrimination education programme based on World Health Organisation (WHO) guidelines, which would start at an early age, into the city’s schools. The charter was an election pledge of Mr Trzaskowski’s but commentators suggested that prioritising it as one of his first high profile policy initiatives was a manoeuvre to counter the electoral challenge to Civic Platform from the new liberal-left ‘Spring’ (Wiosna) party led by veteran LGBT activist Robert Biedroń.

However, once the LGBT issue was raised Law and Justice seized the initiative and made it a central campaign theme in the run-up to May’s European Parliament (EP) election. It particularly condemned the proposed new sex education policies arguing that they: sought to use state-appointed specialists to undermine the traditional role of the family and parent’s rights to bring up their children according to their own values; and promoted the premature sexualisation of children. More broadly, Law and Justice used the charter to put itself at the head of a moral crusade arguing that it was defending traditional family values, Polish national identity, and Christian culture against the imposition of what it called ‘LGBT ideology’: an allegedly aggressive policy agenda based on foreign ideas promoted by left-wing enemies of Western civilisation.

For their part, the LGBT movement and its supporters denied that they sought to promote any ‘ideology’, in the sense of having a programme that encompassed all elements of public life and systemic change, or that they were a threat to the family and Polish traditions. Rather, they argued that their policy agenda simply represented a commitment to defending minority rights and opposing discrimination and manifestations of hate which, they said, were all part of Poland becoming a modern, open and diverse European society that respected all of its citizens.

Since then, the LGBT issue has taken on a life of its own and continually resurfaced as a salient political theme. In particular, the LGBT ‘equality parades’ held in more than twenty Polish towns and cities over the spring and summer, four of them for the first time, have become a key flashpoint. Law and Justice politicians and the Polish Catholic Church hierarchy – which, although not as influential as it once was, remains an important civil society actor – criticised the parades arguing that they encouraged anti-religious profanity and unnecessary public displays of sexuality. In a significant and highly controversial intervention at the beginning of August, the archbishop of Kraków Marek Jędraszewski argued that the LGBT movement was neo-Marxist in its totalitarian ambitions, warning of a ‘rainbow plague’ (the six-colour rainbow is one of the movement’s best known symbols) analogous to the ‘red plague’ of the communist era.

Mobilising the base, dividing the opposition

The LGBT issue is certainly a polarising one that strikes an emotional chord with many Poles because it involves a clash of basic moral-cultural values and maps on to some of the deepest divisions in Polish society. Given that a defence of traditional moral codes and pushing back against Western cultural liberalism has always been a key element of Law and Justice’s appeal to more socially conservative voters, raising the issue’s salience certainly helps to mobilise the party’s core supporters in smaller towns and rural areas where such values still hold considerable sway. Law and Justice also benefits from the vocal criticisms of the LGBT movement by the Catholic Church, which remains particularly influential in the ruling party’s electoral heartlands where levels of religiosity are still high. Energising Law and Justice’s base was particularly important, and helped the party to secure an unexpectedly large victory, in the EP election where turnout had traditionally been lower in smaller towns and rural areas.

Moreover, Law and Justice saw the emergence of the LGBT issue as an opportunity not just to mobilise its core electorate but also to win broader public support for the party by framing the debate in a way that was very unfavourable for the opposition. While Poles appear to be increasingly tolerant of LGBT lifestyles, this tolerance is not unconditional and beyond the larger towns and cities the country remains culturally conservative. Popular acceptance starts to decline when the agenda moves beyond how individuals choose to live their private lives into areas which Poles feel belong to the realm of family life, such as proposals that appear to diminish the role of parents as the primary educators of their children in matters of sexual relations and morality. Similarly, many Poles, including those who are not especially religious, are extremely hostile to the profanation of Catholic symbols, as in Poland many of these are also regarded as broader national symbols. For example, LGBT activists will have alienated many Poles by reproducing an image depicting the Black Madonna of Częstochowa, a revered national icon of the Virgin Mary considered sacred for many centuries, with her halo repainted as the LGBT rainbow symbol.

While Poles are fairly evenly divided on the question of legal recognition of same-sex civil partnerships, which many do not appear to see as really impacting upon their everyday lives, a substantial majority are opposed to same-sex marriage and they are overwhelmingly against adoption of children by same-sex couples. Consequently, Law and Justice seized upon remarks by Paweł Rabiej – Mr Trzaskowski’s deputy, who is in a same-sex relationship – suggesting that the LGBT lobby’s call for legal recognition of civil partnerships was simply a precursor leading to further, more radical demands to re-define marriage (set out in the Polish Constitution as the union of a man and woman) and grant adoption rights to same-sex couples. The party argued that this showed the LGBT movement was not simply fighting for tolerance and respect but wanted special privileges for same-sex unions that undermined institutions such as traditional marriage which, they said, stabilised the social order and promoted the common good.

Raising the salience of the LGBT issue also draws out divisions within the opposition, particularly between more overtly cultural liberal-left groupings and the agrarian-centrist Polish Peasant Party (PSL) whose electoral base includes many social conservatives living in smaller towns and rural areas. At the same time, Civic Platform has attempted to avoid associating itself too unambiguously with the LGBT movement. During its most electorally successful period, Civic Platform was an ideologically eclectic and electorally heterogeneous grouping that avoided taking clear stances on controversial moral-cultural issues. For sure, in recent years the party’s conservative wing has become marginalised and its stance increasingly socially liberal (the leadership probably privately supports same-sex marriage and even child adoption by same-sex couples), which has played well in the larger towns and cities that form the core of its electoral base. Nonetheless, Civic Platform cannot completely ignore its more traditionalist conservative-centrist supporters and so remains wary of being clearly aligned with the policy agenda of the cultural left. So although the party recently made its first official promise to introduce same-sex civil partnerships, this was framed very cautiously in terms of giving unmarried couples inheritance rights and access to their partner’s medical information (something that could also be popular with those in informal heterosexual relationships) rather than as an overtly ‘LGBT rights’ issue.

Framing is the key

In fact, Polish attitudes towards LGBT issues are fairly complex, fluid and not necessarily automatically favourable for the social conservative right. Public opinion can probably best be summarised as: toleration but not affirmation (or even, necessarily, acceptance). For example, an April 2019 survey by the CBOS agency found that the number of respondents who felt homosexuality should not be tolerated had fallen from 41 per cent in April 2001 to only 24 per cent, while the number who said that it was something normal increased from five per cent to 14 per cent over the same period. However, a majority (54 per cent) still felt still that, although homosexuality could be tolerated, it was not something normal. So critical to how the LGBT issue plays out is the way it is framed, and a key element of this is who is seen as the aggressor or the victim.

A good example of the risk that the LGBT issue can pose to Law and Justice came in July when a violent crowd of football hooligans and radical nationalists threw stones and fireworks at participants taking part in the first equality march held in Białystok, an city in the culturally conservative Podlasie region in Eastern Poland. Liberal-left commentators and opposition politicians responded by accusing Law and Justice and the Catholic Church of creating a toxic atmosphere that incited and legitimised violence against the marchers and LGBT community more generally through their attacks on sexual minorities. They cited as an example stickers distributed by the pro-government ‘Gazeta Polska’ newspaper with a crossed-out rainbow symbol that read ‘LGBT-free zone’.

For its part, Law and Justice distanced itself from the stickers, arguing that they failed to distinguish between individual members of sexual minorities and criticisms of the LGBT movement’s political agenda. Moreover, both the ruling party and Church leaders condemned the Białystok violence but countered that anti-clerical rhetoric used by some LGBT activists could also have led to an upsurge in attacks on Polish clergy in recent months. Nonetheless, although a July survey conducted by the IBRiS agency for the Rzeczpospolita newspaper found that while most respondents (34 per cent) felt that nationalists were to blame for the Białystok incidents, the second most popular answer was Law and Justice (28 per cent) followed by the Church (26 per cent), while 24 per cent cited LGBT organisations, 18 per cent the Civic Platform local mayor and only eight per cent the opposition. So although Law and Justice is more comfortable discussing the LGBT issue than the liberal-centrist opposition, raising its salience is potentially a risky strategy for the ruling party which can easily lose control of the narrative and be portrayed as aggressive and intolerant.

This opinion editorial was first published at the Polish Politics Blog.