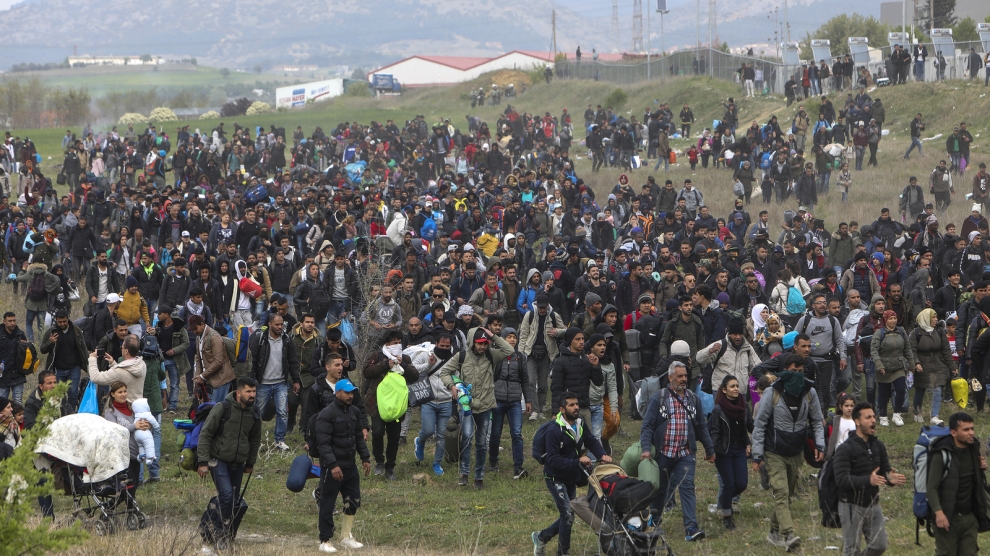 From boats capsizing off the Mediterranean coast to razor-wire fences being erected along national frontiers, the perilous journey émigrés embark on from their war-torn homelands and the adversity they face upon reaching their intended destination are unassailable.
The lucrative business of people smuggling has now morphed into a state of emergency which endangers the solidarity and cooperation post-WWII Europe sought to establish.

Bureaucrats at the helm of the peace project have taken too soft a stance on illegal aliens pouring into the continent and exposed the shortcomings of the borderless Schengen zone with trespassers venturing from Athens to Amsterdam virtually undetected. The laxity with which this incursion is being handled has underscored the ideological polarity that still prevails between East and West as we witness a conceptual re-emergence of the Berlin Wall 30 years after its demolition.

Brushing aside major socio-economic predicaments the bloc is confronted by, namely record high youth unemployment and stagnant GDP growth, in favour of pandering to the needs and demands of refugees has not boded well with taxpayers. Those who are supposedly in fear of their lives often have no intention of settling down in the first sanctuary or port of entry which welcomes them. They instead appear adamant on trudging through to either Germany or Sweden whose munificent welfare systems have, in many cases, been a disincentive for claimants to enter the local workforce. The fact that an overwhelmingly large number of asylum seekers happen to be young, able-bodied men arouses further suspicion about the authenticity of their pleas.

The Visegrád quartet has been fairly vocal about the irrationality behind adopting an open-arms approach towards economic migrants masquerading as refugees. The presidents of Hungary, Slovakia, the Czech Republic and Poland largely see eye-to-eye on the dire consequences of mass migration, though their apprehension about the alarming situation in which Europe finds itself today continues to be downplayed by Brussels. It is the Franco-German kingpins who dictate the continent’s policies while ex-communist member states are reminded where they truly feature in the pecking order.

The leftist media has mastered the art of invoking public sympathy towards this wave of undocumented migrants while failing to divulge the sheer abhorrence some of them hold towards the underpinnings of humanism and religious pluralism. Rather than acknowledging the profound language and cultural barriers which curtail any prospect of successful assimilation into society, EU leaders have subscribed to the credulous view that all newcomers are well-intentioned and eager to embrace the European way of life. Civil rights, such as freedom of expression and gender equality, understandably come as a complete shock to those who have grown up in despotic environments where enforced disappearances for political dissent are commonplace while a mere handshake with someone of the opposite sex is strictly forbidden. Another encumbrance to seamless adjustment is the psychological trauma that people fleeing warzones suffer from and their consequent inclination to sow chaos in areas they inhabit.

By allowing altruism to compromise the safety and well-being of its own inhabitants, EU member states have granted Turkey considerable leverage over the bloc. While the latter remains a country whose judicial framework is totally at odds with the democratic practices enshrined in the Occident’s constitution, the Turks have managed to blackmail their way into accession talks. With their head of state repeatedly threatening to open the floodgates to hordes of migrants from Iraq and Syria, European leaders have all but succumbed to his ultimatum and in doing so, strengthened Erdogan’s negotiating hand.

In the near term, it appears quite plausible that the Turkish government will secure visa-free travel for its 80 million citizens as a preamble to fully-fledged membership of the union. An agreement of this kind will serve to compound rather than alleviate the wave of unwelcome visitors, thereby creating a further quagmire for mainland Europe.

The Balkans, meanwhile, have arguably borne the brunt of this refugee influx yet face unwarranted condemnation for their treatment of migrants. The inter-ethnic wars preluding the breakup of Yugoslavia saw a similar exodus of civilians and the devastating ramifications that large-scale displacement engenders. While the South Slavs can relate strongly to the helplessness and desperation these immigrants are going through, their nations simply lack the infrastructure as well as the funding to harbour them on a long term basis. In a region dubbed the “Pandora’s box of Europe”, the burdensome task of sheltering stateless settlers who have been inadequately vetted will only bring about further instability and heightened security risks. Despite this, pressure is constantly being exerted on EU aspirants like Serbia and Bosnia to clean up their act or risk having their membership requests withdrawn.

Britain’s decision to leave the European Union, albeit bedlam-ridden, has led a number of existing member states to consider the seemingly farfetched option of following suit. While the Eastern bloc is growing increasingly disillusioned with the harmonisation of immigration policies, their financial dependency on Brussels constrains them to toe the line. Although ill-sentiment towards forgoing its nationhood and law-making powers has been brewing in the United Kingdom since it joined the group, many argue that the ongoing refugee crisis was final nail in the coffin which ultimately prompted Brexit. The imposition of migrant quotas has seen a number of constituents accept countless individuals against their will. Such measures are far from resourceful and will only generate greater resentment towards the notion of a United States of Europe. The recent rapprochement between Russia and its erstwhile Warsaw Pact allies is indicative of the bloc’s divisiveness on key issues.

The CEE region has come to its senses with the asininity of letting in people who would end up being a massive liability to their domestic economies. Nevertheless, any effort to remedy the crumbling EU model and address the urgent need for its reform remains futile. Criticism from outspoken members of parliament and right-wing parties continues to fall on deaf ears as the political elite’s intolerance of opposing views is becoming more and more apparent.