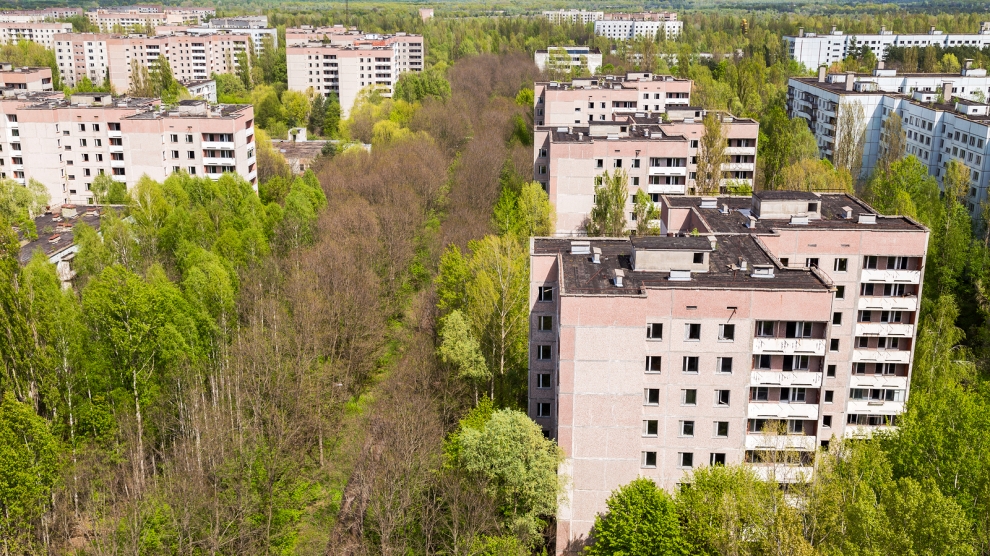 “The further we move in time from the disaster, the more it seems like a myth – and the more difficult it becomes to grasp its real-life roots and consequences.”

Serhii Plokhy, the author of the book History of a Tragedy, winner of the Baillie Gifford prize.

I remember April 26, 1986, very distinctly. At that time, I worked as a translator at the Institute of Scientific and Technological Information in Kyiv. In the morning of April 26, I learned about the explosion at nuclear reactor number four of the Chernobyl power plant from a colleague, who had got the information from a trusted source, namely, from an official working in the Fourth Central Department of the Ministry of Health Protection, which served the political elite in the former Soviet Union. The administration and the VIP patients of that department were informed promptly about the nuclear accident and the dangerous health effects of exposure to high levels of radiation (unlike ordinary citizens of the country).

My colleague also said that doctors recommended the evacuation children from Kyiv as soon as possible. The news was shocking for everyone, but we tried to remain calm. The main problem was a lack of information. The public was kept in the dark. On the day of the disaster, even residents of the city Prypiat, located only three kilometers from the Chernobyl nuclear power plant, did not know the truth. There was a sense of deception and betrayal. And besides, we knew that representatives of the local authorities had been actively removing their families to safe places from the very first hours of the nuclear accident. An official statement of the USSR news agency TASS about the accident at Chernobyl was made at 9pm on April 28, only after Swedish monitoring stations reported abnormally high levels of wind-transported radioactivity and pressed for an explanation. The Soviet government was actually forced to admit that there had been an accident at Chernobyl. In spite of that, the USSR’s leaders insisted on conducting the traditional May Day celebrations in all cities of Ukraine, including Kyiv. As such, on May 1, 1986, when the radiation level was rather high, the streets of Kyiv and all cities in the country were crowded with festively-dressed, joyful people and children with flags and flowers. The government concealed the truth and the gravity of the situation.

Over the next few days, the panic level in Kyiv and other Ukrainian localities increased. Many people tried to leave contaminated places and even the country. All air and train tickets were sold out. The official evacuation of people from the Chernobyl 10-kilometre exclusion zone started on April 27, and from the 30-kilometre zone only a few days later. The entire city of Prypiat (about 50,000 people) wasn’t evacuated until 36 hours after the explosion. Up to that point, residents had carried on with their lives in blithe ignorance, unaware of the lethal threat. Kids played in playgrounds, studied at schools. Families ate dinner and watched TV. Young couples married…

I evacuated my two children from Kyiv on April 30. Together with my sister and her little baby, we left Kyiv for a small town in the Carpathian region, where our relatives lived. Our children stayed there for three months. My sister and I took leave and stayed with the children by turns. Afterwards, our relatives agreed to care for them for another month.

When we had to return to our homes and jobs, it was a real shock to come back to Kyiv at that time. Military men in rubber mackintoshes and gas masks with dosimeters at the checkpoints on the outskirts of the city checked every car entering. Kyiv was immersed in darkness, the streets were deserted. All in all, it looked apocalyptic and inspired horror and despair. However, we all had to live with the situation. And we continued to live our everyday lives in those new conditions doing our best to protect our children, those who were close to us and ourselves from that invisible but very dangerous enemy – the radiation. 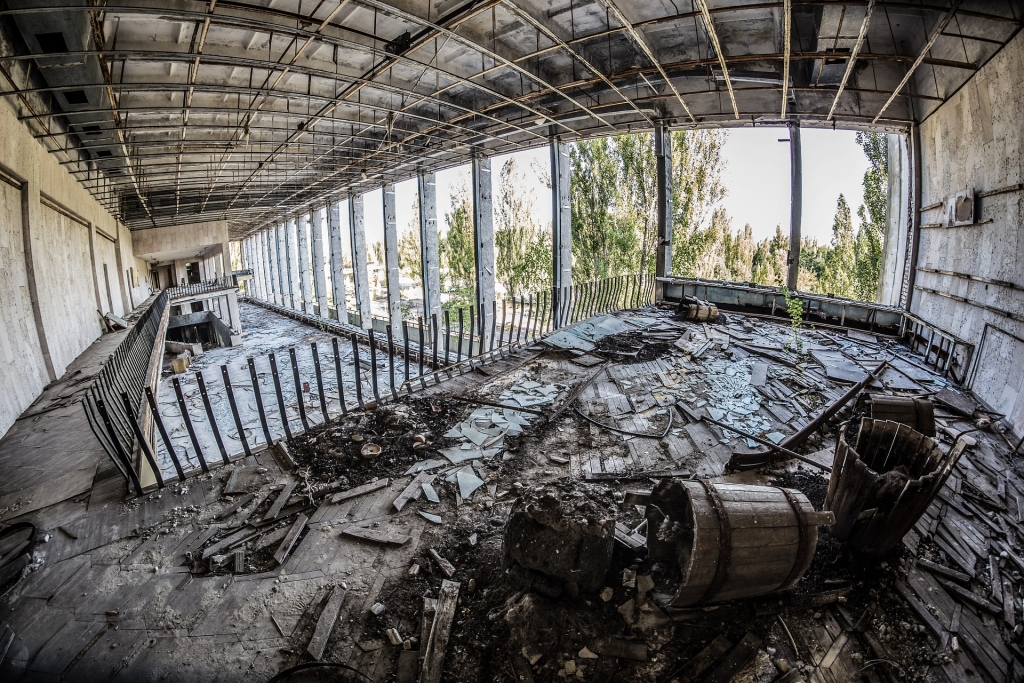 Only over the course of the following years did we get to know the truth about the Chernobyl disaster, which blighted Ukraine and changed the world. On April 26, 1986, several technicians had run an experiment that started with a series of small mistakes and ended up having cataclysmic results. Violations of the established rules and norms caused the fourth reactor of the power plant to explode. It is estimated that the amount of radioactive material was 400 times greater than the combined fallout over Hiroshima and Nagasaki during World War II. More than 50 reactor and emergency workers died from radiation at the time. About 600,000 people, often referred to as Chernobyl’s ”liquidators”, were sent in to fight the fire at the nuclear plant after the explosion. They really helped to prevent the whole of Europe from becoming uninhabitable. Many people demonstrated heroism on various levels – firemen, the people who were sent to close the reactor doors, doctors, soldiers, helicopter pilots, photographers.

Almost 350,000 people were evacuated from the contaminated area. People left their homes and all of their belongings behind forever. Though the disaster took place in Ukraine, much of the radiation was blown north to Belarus. The areas surrounding the Chernobyl nuclear power plant have since deteriorated into abandoned ghost towns like Prypiat. Some residents, about 200 self-settlers (the so-called samosely) have returned to their villages ignoring safety warnings. They live in 162 villages within the exclusion zone.

More than 33 years have already passed since the nuclear disaster. Hundreds of thousands of people worked to decontaminate the area over the years, but the areas surrounding the Chernobyl site are still considered to be some of the most polluted areas on earth. The health impacts of Chernobyl radiation have spread far in Ukraine and Belarus and consequences will be felt for many more generations. Almost every Ukrainian has acquaintances or relatives who participated in the clean-up of the accident or has health issues related to Chernobyl. For the last three decades, Chernobyl has been a byword for the potential dangers of nuclear power. Prypiat was once meant to be a model nuclear city in the Soviet Ukraine, a thriving Atomgrad, built to house the workers of the Chernobyl nuclear power plant, with schools and kindergartens, a cinema, a palace of culture, swimming pools, river port, shops and cafés. It offered a standard of living above and beyond that of many contemporary Soviet cities. Now it’s known only as the Chernobyl exclusion zone, devoid of humans and since retaken by animals and nature itself.

The damaged reactor was initially covered by a massive steel and concrete structure (a sarcophagus or a shelter), to stop more radioactive material escaping. It is 107 metres high and 256 metres wide and was funded by the European Union. In 2016, the New Safe Confinement was put over the shelter that was built around the reactor immediately after the disaster. But the effect of the disaster on the local environment was still catastrophic. A nearby woodland became known as the Red Forest, from the rust-coloured needles dropping from the dead pine trees. It is still one of the most radioactive places on earth. Animals and plants suffered mutations and behavioral anomalies. Scientists say Chernobyl will not be safe to inhabit for 24,000 years.

Nevertheless, life is finding a way to adapt. In 2016, the Ukrainian part of the exclusion zone was declared a radiological and environmental biosphere reserve by the national government. At present, the area hosts great biodiversity. Researchers confirm the general lack of major negative effects of current radiation levels on the animal and plant populations living in Chernobyl. The territory is now inhabited by brown bears, lynxes, European bison, wolves, boar and Przewalski’s horses as well as more than 200 bird species. In the exclusion zone, they can live untouched by human activity, like hunting or heavy traffic. Furthermore, researchers have also found signs that could represent adaptive responses to life with radiation. For instance, frogs within the exclusion zone are darker than frogs living outside it, which is a possible defense against radiation.

Opposite the old nuclear site, a new solar power plant has started generating clean power. It’s a project that is as much about symbolism as economics. For the people of the area, it is a sign of recovery and new growth.

Chernobyl still resonates today. Many tourists visit Chernobyl and the surrounding areas every year. According to estimations, in 2017 nearly 60,000 paying visitors entered the Chernobyl exclusion zone. In 2018, their number reached 70,000.

A popular new American television miniseries, Chernobyl, has now caused a real tourist boom in Ukraine. People are somehow reflecting on Chernobyl once more. Ukrainian travel companies cannot satisfy the increasing demand, which has grown by 40 per cent since the miniseries was screened. The traditional Chernobyl tour programme has been revised to include the places shown in the series, and now includes a bus transfer from Kyiv to Chernobyl, which is 140 kilometres away, an excursion to the Chernobyl nuclear site and a visit to a post-modern Pompeii – the ghost town of Prypiat. Opposite the checkpoint you find the Chernobyl tourist information centre selling T-shirts, hot-dogs, fridge magnets, gas masks and even full nuclear fall-out suits. A number of budget hotels have opened at its fringes, with prices ranging from 20 to 70 US dollars per night.

In May 2018, the clean-up operation on the gutted reactor was deemed complete. As a result, the Ukrainian Cultural Foundation decided that the zone should now open itself up to tourism. There are also plans for developing solar power plants in the area, and for expanding forestry work. Last year, there was even an art installation and a techno party inside the abandoned city of Prypiat.

Over the past 33 years, Chernobyl has gone from being considered a potential desert to an area of high interest for biodiversity conservation.

After a genuinely apocalyptic event, life in Chernobyl has found a way forward.

Russian sanctions against Georgia: How dangerous are they for country’s economy?
In search of a compromise: Zelensky’s emerging Donbas policy
Comment