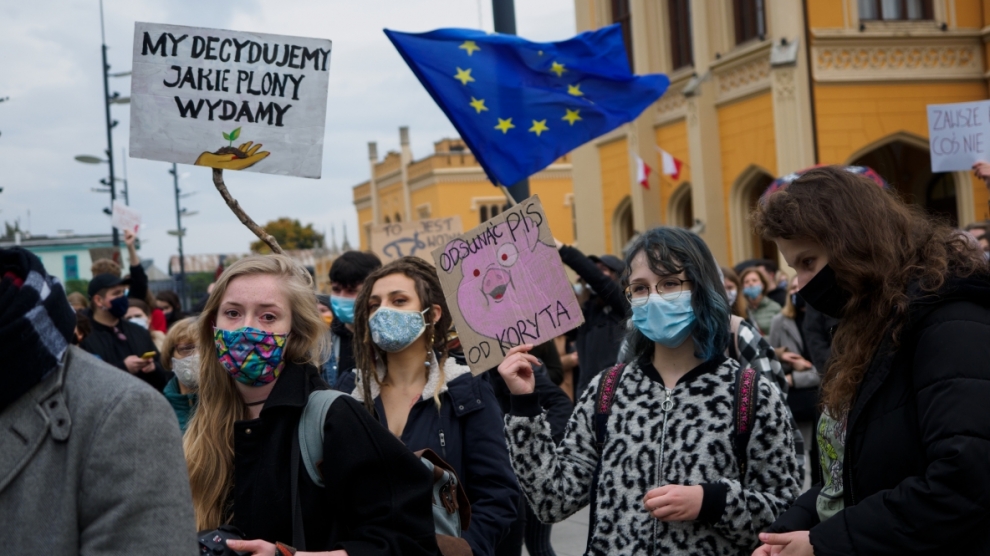 The Polish government’s war with both Brussels and a significant part of the Polish population over the rule of law is against the country’s national interests.

On October 26, the European Parliament adopted a resolution criticising the Polish Constitutional Tribunal’s decision to ban over 95 per cent of legal abortions in Poland. Indeed, out of 1,110 pregnancy terminations in 2019, 1,074 were carried out on the grounds of severe and irreversible foetal defects. This option will now be closed in Poland, which has one of the most restrictive abortion laws in the European Union. On the same day the resolution was adopted, the prime ministers of Poland and Hungary met in Budapest to confirm that both governments would veto the EU 2021-27 financial framework and Covid-19 recovery fund.

What connects these issues? The rule of law, which is enshrined in Article 2 of the Treaty on European Union. It is true that national abortion laws are within the discretion of the member states. However, Poland’s rule of law has been under attack since the capture of the Constitutional Tribunal, which has been converted by the ruling Law and Justice party (PiS) into a rubber-stamping body.

As an example, as PiS was unwilling to restrict legal abortions through parliament, the issue was decided in the Constitutional Tribunal dominated by the ruling party’s nominees and headed by a friend of PiS chairman Jaroslaw Kaczyński.

The new restrictions on legal abortions sparked a wave of mass protests all over Poland. It is not surprising that many demonstrations in Warsaw took place, not in front of the Constitutional Tribunal, a formal decision-maker, but near PiS party headquarters, Kaczyński’s house, governmental buildings and the parliament, where PiS has a majority. Protesters knew who was behind the ban.

Needless to say, the political capture of the Constitutional Tribunal is only one of many violations of the rule of law that have been taking place in Poland since late 2015. This is the reason that the PiS government, supported by Viktor Orbán from Hungary, is opposing the rule of law mechanism that is supposed to link EU funds to one of the key values of the European Union.

The European Commission’s 2020 Rule of Law Report shows that Poland and Hungary are the worst countries in terms of upholding these values. Under the PiS government, the ranking of Poland in major indices measuring the rule of law, civil liberties and other qualities of democratic institutions has deteriorated, and many violations have led to international reactions.

The proposed rule of law mechanism is only one example of the EU response to Poland’s weakening of the rule of law. The EU institutions have been using recommendations, resolutions, infringement procedures in the Court of Justice, and Article 7 with mixed results. But even without any response by the EU, the rule of law should matter to Poland as it is important for guaranteeing other human rights and fundamental freedoms, as well as  a stable environment for doing business, which is, among other things, important for economic growth.

Moreover, Polish authorities should focus on strengthening their position in the EU, while conflicts over the rule of law have the opposite effect. Poland is still a net beneficiary of EU funds, but the benefits from the Single Market are at least five times higher. Therefore, strengthening the Single Market and opposing intra-EU protectionism should be the government’s priority. The PiS government’s war with Brussels, not to mention a significant part of the Polish population, over the rule of law is against Poland’s national interests.

Finally, Poland will not lose a single euro due to the rule of law mechanism if rule of law principles are not violated by the government. It will require the end of policies undermining judicial independence and the reversal of changes made in the past, including the political capture of the Constitutional Tribunal that has led to these controversies related to the abortion law. It is the best response the government can offer to the current crisis, and it will benefit both the Polish people and Poland’s position in the EU.

The article is syndicated by 4Liberty.eu Network

Marek Tatala is Vice President of Civil Development Forum (FOR), a think tank in Poland and 4Liberty.eu Network member.

What a Biden administration means for Eastern Europe
The solution to Europe’s digital challenge should work for everyone, everywhere
Comment