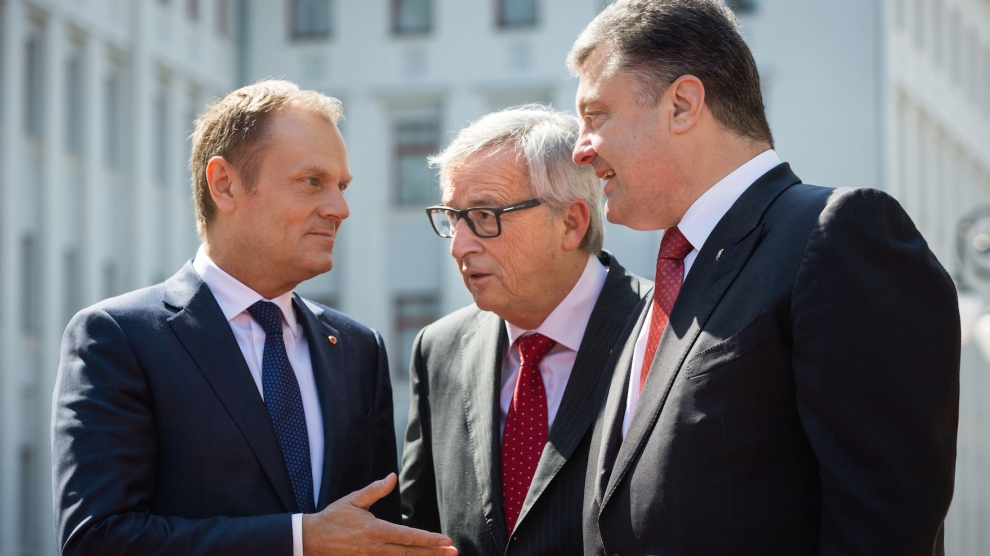 The EU has been consistently very weak in dealing with post-Soviet countries (except the Baltic states) compared with the former Communist countries of Central Europe and Southeastern Europe. The latter knew exactly where they wanted to be after 1989: part of the Euro-Atlantic constellation. Joining the EU and NATO was their goal. It was about coming home to a reunited Europe.

When it comes to Eastern Europe, the EU is making fatal mistakes that leave the region without a perspective and render it even more unstable than it already was. Yet these shortcomings could be easily remedied with political will.

The biggest shortcoming is the lack of a long-term strategy toward any of these countries. Even in Ukraine, the EU has no idea what perspective to offer this big country whose political and economic stability has enormous consequences for Europe.

Even more worrying, the EU is not applying sufficient pressure on Ukrainian President Petro Poroshenko to implement reforms. Nor is it doing what it has persistently failed to do in both old and new members as well as candidate countries: reach out, as Mikhail Minakov from Kiev* wrote, “to local governments and pro-reform NGO networks.”

If the EU wants to have an impact, it is not going to achieve this by talking to the governing elites while failing to engage genuinely independent civil society movements. Didn’t it learn anything from its misguided policies in the Middle East prior to the Arab Spring? Seemingly not.

Look at the EU’s policy toward Azerbaijan. As Emin Milli from Baku* wrote, “European countries allowed Azerbaijan to chair the Council of Europe in 2014 while back home the authorities shut down the country’s few remaining independent NGOs and jailed many of their leaders as well as various journalists, politicians, activists, and human rights defenders,” He added that “instead of human rights and democracy, European politicians now speak vaguely of economic engagement.” The ranking of inadequate is generous.

The EU is also fumbling in Belarus. There, the EU’s approach is either to “leave the country in a state of political isolation or to engage with it regardless of its brutal political regime,” wrote Andrei Yahorau from Minsk.*

Yet where the EU does engage intensively, it doesn’t have much to show. Over the past several years, Brussels has consistently propped up successive governments in Moldova, believing the pro-European rhetoric of the country’s political elites but at the same time blind or unwilling to address the endemic corruption among those elites. That corruption, exemplified by a huge recent banking scandal, has left the elites intact but the citizens disgusted and disillusioned with their leaders and the EU. No wonder Moldova is rich pickings for Russia.

The EU could adjust its policies toward its Eastern neighbours. It has the tools to do so. One is leverage. Why couldn’t the EU introduce smart and targeted sanctions on some key figures in the Azeri government if Brussels is that committed to defending human rights activists?

Another option would be to reach out in a much more systematic way to civil society, be it movements or individuals. That would mean engaging civil society in the allocation of EU funds and supporting independent media. It would also mean the EU breaking out of its obsession of dealing with political elites and being entrenched in the capitals while ignoring the provinces and local activists.

Then there’s the role of student and postgraduate exchanges as well as focusing on building up a strong and independent judiciary, as Nino Lejava from Tbilisi argues. The hunger for access to education through the EU’s Erasmus student exchange program is immense, with both sides coming out as winners.

Above all—and this is the EU’s fundamental failing in Eastern Europe—neither the institutions in Brussels nor the member states have considered the future status of the region. Most of the countries in the Eastern neighbourhood do not want to remain the lands in between. They want to be somewhere and something, instead of being stuck in a perpetual but uneven tug-of-war between Russia and the EU. The longer this precarious status continues, the greater the instability will be.

*Between November 6 and December 11, 2015, Carnegie Europe continued its Capitals Series. In this second phase, the focus was on the EU’s Eastern neighbours, which the bloc has so often zigzagged over in trying to establish a coherent policy toward them collectively or bilaterally. In the series, the authors from Armenia, Azerbaijan, Belarus, Georgia, Moldova, and Ukraine were asked to give a critical assessment of the EU’s policies toward their country, ranked on a scale from “miserable” to “excellent.” The EU’s record in Azerbaijan, Belarus, and Ukraine was deemed “inadequate” (the second-lowest ranking). In Armenia, Georgia, and Moldova, it was described as “satisfactory” (the third-lowest score).

With a New Pro-Business Government, Croatia Offers Great Investment Opportunities
What the Belgrade-Pristina Dialogue Says About the EU’s Role As a Peace Mediator
Comment