May and June mark the 30th anniversary of the fall of the Iron Curtain. The image that most impressively proves this turning point in European post-war history was taken on June 27, 1989 at the Austro-Hungarian border. It shows foreign ministers Alois Mock and Gyula Horn symbolically cutting through the border fortifications. Following the famous first words of Neil Armstrong on the lunar surface, one could say: “A small step for two men, but a huge leap for the people of Europe”. 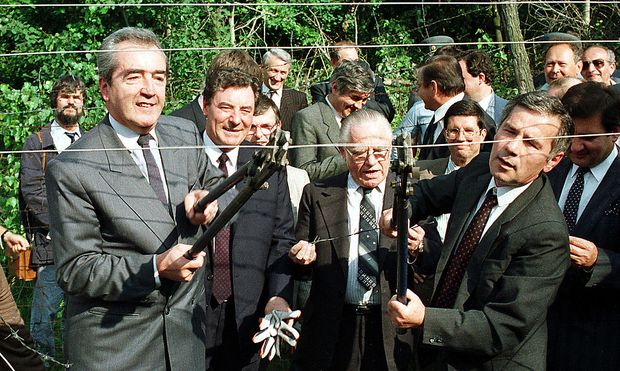 The Hungarian government’s decision not to renew or dismantle the border fortifications with Austria triggered a chain reaction with political, economic and social consequences that were unimaginable at the time. This benefited not only RZB, predecessor of Raiffeisen Bank International (RBI), which at that time had already been present in Hungary for more than two years with its own bank, but also countless other companies and with them the people and countries on both sides of the border once guarded by walls, minefields and machine gun towers.

The political and social upheavals that followed in the years after 1989 led to an overall rapid political transformation process in the eastern part of the continent, the results of which, similar to the economic development, were not foreseeable at the time. Who would have thought that only 15 years later, on May 1, 2004, the Czech Republic, Estonia, Hungary, Latvia, Lithuania, Poland, Slovakia and Slovenia (together with Malta and Cyprus) would join the EU? Probably very few of us would have included this event, at least as a distant goal, in their vision of a united Europe.

We asked prominent contemporary witnesses, who had this vision in one way or another, about their memories of the opening of the East and about their view of the resulting developments.

You can read their testimonies at Discover CEE.