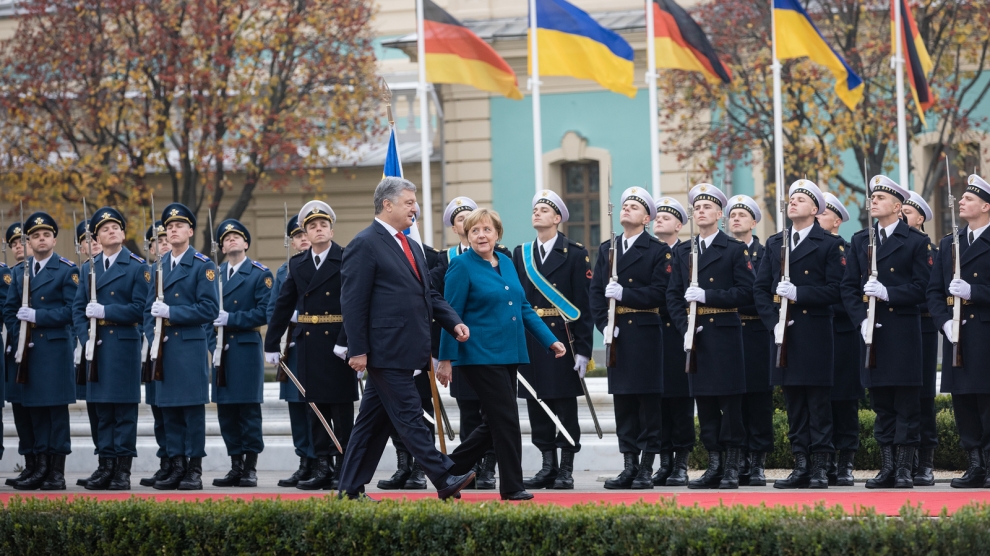 In 2018, developments in Europe were guided by a triangle of interactions between German Chancellor Angela Merkel, Ukrainian President Petro Poroshenko and Russian President Vladimir Putin. In 2019, the interplay between them will again be a crucial factor in determining the direction Europe, Ukraine and Russia will go.

The defining feature of 2018 was that it marked the end of the Merkel era in German politics, and probably in European politics. Her decision not to stand for reelection as the head of her party, the Christian Democratic Union (CDU), was prompted by her increasing inability to cope with frictions in her coalition government. These tensions were largely driven by her having opened the gates for uncontrolled migration.

Her visit to Kyiv in early December 2018 provided final confirmation that her role in the Minsk peace process for Ukraine had never become significant. French President Emmanuel Macron’s loss of popularity seriously devalued her wingman, hampering her ability to provide European leadership. Together, these phenomena suggest a shaky future for Brussels.

Developments in Ukraine deepened the impression of a nation adrift, its domestic politics marked by a grave deficit of transparency and accountability. Hollow reforms were touted as successes in a way that brought back memories of Russia in the 1990s, while the outside world claimed it was committed to providing support but remained devoid of a strategy.

With key elections set to take place this year – for the presidency and Ukraine’s parliament, the Verkhovna Rada – politics is locked in a waiting game. In the presidential race, Yulia Tymoshenko looks poised to defeat Mr Poroshenko, the incumbent. But the naval confrontation in the Kerch Strait in late November escalated the crisis with Russia, providing new momentum for national unity.

Developments in Russia featured a regime seeking to deflect attention from trouble at home by taking an increasingly assertive stance in foreign policy. Having assumed full responsibility for necessary but deeply unpopular pension reform, President Putin saw his approval ratings plummet. Heightened tensions with the United States implied there would be no end to sanctions any time soon.

The standoff with NATO gained momentum, from the Vostok 2018 military drills to more air strikes in Syria and the renewed confrontation with Ukraine. The administration of US President Donald Trump announced that the country was unilaterally withdrawing from the Intermediate-Range Nuclear Forces (INF) Treaty, increasing the risk of a new arms race.

President Macron linked these developments back to European politics. In a speech on the 100th anniversary of the end of World War I, he proclaimed that nationalism – in contrast to patriotism – is evil, and called for a joint European army, potentially even to defend Europe from the US.

His gambit insulted the Americans and shined a spotlight on the sorry state of armed forces in continental Europe. It drove home the reality that without the US by its side, the European Union would have no chance of standing up to Russia. Although Mrs Merkel later said that a European army was merely a “vision,” the damage to the credibility of the Merkel-Macron tandem was already done.

The departure of the United Kingdom will make it abundantly clear that the EU is not synonymous with Europe, while the erosion of the Franco-German axis will dampen enthusiasm for federalism. All this will demonstrate that “more Europe” is not the solution to the continent’s problems. An opinion poll conducted in September 2018 showed that 49 per cent of EU citizens think the bloc is irrelevant, and that 64 per cent think life might not be worse without the EU.

Elections to the European Parliament in May 2019 will confirm the emerging pattern of parties in the center either collapsing or migrating to the ascendant fringes on the left and right. A radical transformation in the political landscape will reveal the fundamental flaws inherent in the propagation of “European values.” The EU’s fissures are the result of countries with very different historical legacies and attitudes joining together. There are substantial disagreements on core matters, including the rule of law, corruption, government accountability and attitudes toward foreigners.

Although the combined efforts of Prime Minister Viktor Orban of Hungary, Chancellor Sebastian Kurz of Austria, Deputy Prime Minister Matteo Salvini of Italy and Christian Social Union leader Horst Seehofer of Bavaria have significantly reduced the flow of migrants into Europe, tensions over failing integration and burden-sharing will continue to rise. This phenomenon will poison domestic politics in Germany and fuel frictions between Brussels and governments that fail to live up to the elusive “European values.”

Despite warnings from friends across the Atlantic that Europe should not exacerbate its internal divisions, supporters of Mrs Merkel and Mr Macron will likely continue to condemn nationalism and ostracize political parties and entire countries. Chancellor Merkel leads the way by praising globalism.

The continued moral shaming will deepen the rifts between the Franco-German core and the Visegrad countries in the east and Austria and Italy to the south, complicating the search for solutions to the critical problems of migration and fiscal policy.

The March presidential elections do not promise to amount to a breakthrough event in Ukraine. The opacity of the political process reflects the competition between various oligarchic groups. Behind the facade of national unity, tensions remain between camps that are pro-Russia, pro-Europe and middle of the road.

While about 20-25 per cent of Ukrainian citizens remain pro-Russian, the continued war with Russia ensures that their voices remain quiet and restrains pro-Russian oligarchs from resuming major business transactions with the neighbor to the east. Meanwhile, the EU trade and investment sought by pro-Europe oligarchs is hampered by the perception that corruption continues unabated.

In the presidential campaign, Ms Tymoshenko looks set to win, mainly because her party is the only one that is well-organized across the whole country. However, continued tensions with Russia may turn voters toward President Poroshenko and help him win reelection.

No matter the outcome, many Ukrainians will have gone to the polls holding their noses while casting their ballots. For the general population, the oligarch’s infighting clearly shows how corruption remains the name of the game.

Russia’s trajectory will be defined by whether the Kremlin decides to continue diverting attention from domestic problems by escalating its aggressive posture in foreign policy.

Lashing out against Ukraine risks rekindling support for its membership in NATO. Making threats against the Baltic states risks bringing Sweden and Finland even closer to the alliance. Raising the military posture against NATO risks pushing the Trump administration into a post-INF Treaty wager on the deployment of missiles in Europe, and on developing low-yield nuclear weapons. The US may also be convinced to accept Poland’s invitation to establish a permanent military base there.

Despite the high stakes, President Putin is likely to stay on course, placing a premium on cementing his regime at home and betting that a policy of divide and conquer will prevent the EU from presenting a forceful response. Increasing animosity between the US Congress and the Trump administration will reinforce his conviction that he has chosen wisely.

The conclusion is that a weakened and increasingly incoherent EU, bogged down in squabbles over common migration and budget issues, will be ill-equipped to face growing pressure from Russia. As feelings of disgust with the corruption of Ukrainian elites deepen the rifts within the EU on how to deal with Russia, Brussels is being set up for accusations of selling Ukraine down the river.

Stefan Hedlund is professor and research director at the Centre for Russian and Eurasian Studies at Uppsala University, Sweden.