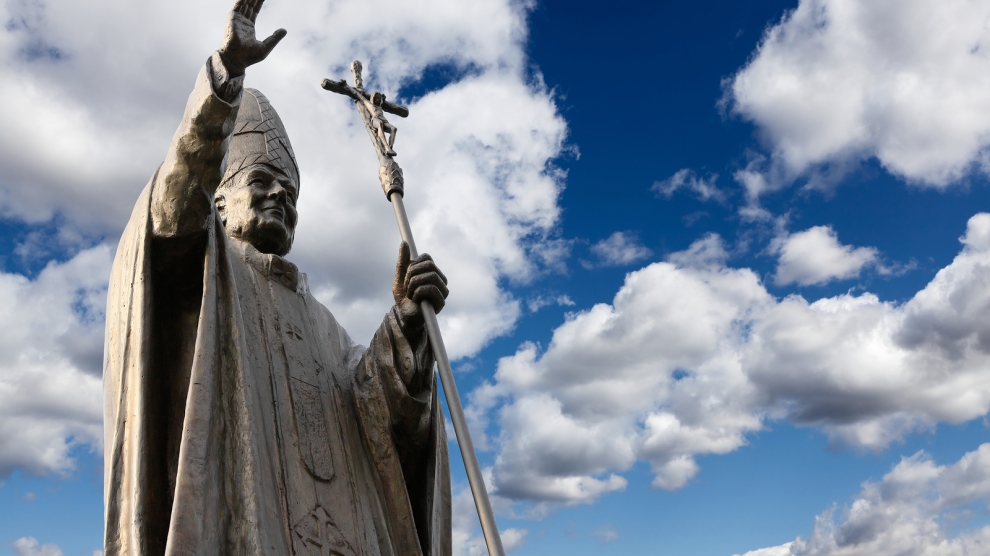 We are afraid of the Church. And I am not talking about the Catholic sinners who are embarrassed by the fear of their pastor or the confessional. I am talking about us Poles who remember Adam Sapiecha’s legend, the struggle of the Church against communism, the heroism of Kazimierz Majdański and the holiness of Karol Wojtyła — the first and probably last Polish pope. We are afraid of cultural and social ostracism, which may surround us if we start talking loudly about what Leszek Jazdzewski said in his speech and what has been said earlier, more or less in the language of diplomacy by Tischner, Boniecki, Lemański or Sowa. Smarzowski’s movie Clergy changed that a little bit. How much? Not enough. And although I do not agree with Jażdżewski’s language and with the generalisation that he makes, the condemnation a priori of everything that the Church and it’s members do, I do understand his anger and frustration. The Church prepared such a language for itself.

The Church was important in the life of the Republic of Poland, whether someone likes it or not. It was also important in my life, especially until the mid-1990s. It was synonymous with the fight for freedom, and today it is synonymous of the fight with freedom. Hiding paedophiles and and offering unclear explanations add to the already heavily tarnished reputation of their excellencies in purple. Added to this are the Byzantine customs of parish priests and even bishops, often with bodily pleasures and alcohol. As Augustine of Hippo said: “Wandering is a human thing, but to persist voluntarily in error is a devil’s thing”. The Polish Church today is in its essence more devilish than the fallen angel himself. It’s a devilishly conscious persistence in error.

When I read Pope Francis’ encyclical The Light of Faith, I do not see in it the path followed by the Polish Church: “The reminder of the bond between faith and truth is more necessary today than ever, precisely because of the crisis of truth that we are experiencing.” You are part of this crisis, the Catholic Church, and your greatest sin is to remain in it consciously. You have become involved in politics, you are an active part of the political game about temporal goods. You lost your ability to anticipate tomorrow. You’re sinful, and you pretend to have a mandate from Pope Francis to Christianise the Republic of Poland. No, you don’t. Jażdżewski’s words may hurt you and should hurt you, but the answer cannot be the arrest – at seven o’clock in the morning – of a 51-year-old woman who distributed the image of the Mother of Jesus in a rainbow halo. This is not the way of Pope Francis, this is not the way of Jesus Christ. This is the way of the Pharisees. When the Law and Justice party clearly violated the constitution, you remained silent. When the Law and Justice party humiliated the disabled, you also kept silent and when the Law and Justice party humiliated teachers and judges, you applauded them from the pulpit. When the police, headed by polish Minister of Interior and Administration, entered the apartment of a 51-year-old woman at seven o’clock in the morning, you were again silent. Therefore, you, the Catholic Church, have no moral right to be offended. You are a part of politics today, you have to take into account the consequences of your participation in politics and that’s just the beginning.

The sin of abandonment of the Church in Ireland

We’re afraid of the Church. We are afraid to protest loudly and collectively against the evil that has dominated the hierarchy governing the Catholic Church in Poland. We are afraid because the Church also includes thousands of great priests. A Church that preaches thrilling Dominican sermons, is full of Franciscan goodness and caring for the weakest Albertine sisters. We are afraid of losing our national-Catholic identity and destroying the myth of a chosen people, which of course we are not, however, we like to think about ourselves like that, because who wouldn’t want to be a chosen nation? The Church cultivates this desire carefully, and even fuels it, but participates in a propaganda political machine to give it more influence, money, and privileges. Everything that is the antithesis of the pontificate of Pope Francis, which John Paul II warned against when he visited Ireland in the late 1970s. A dozen years later, Catholic Ireland disintegrated like a house of cards. Paedophilia scandals, rape, financial embezzlement, sexual promiscuity. The Irish Church’s disaster was complemented by a report on the Diocese of Cloyne, which showed how the Church had covered up cases of sexual harassment before dawn. No other group in society defends its members against criminal prosecution for serious crimes in such a structured way, and paedophilia is one of them, as the Catholic Church is doing. When I listened to the Episcopal Conference on paedophilia in the Church, at which Archbishop Jędraszewski denied the slogan “zero tolerance”, I saw in my mind priests in Ireland collapsing. How different and distant it was from Pope Francis kissing the hand of one of the victims of Polish paedophile priest.

We’re afraid of the Church. But there may come a time when the marriage of the throne and the altar will turn the privileges and influences of the Church into dust. Often when pride strengthens the people’s conviction that their power is unlimited and enduring, something completely different happens. History is full of spectacular falls that were not supposed to happen. Catholic Ireland is a very spectacular example.

The revolution will not change the Polish Church, but neither will waiting for the self-reflection of the hierarchs who govern. The church can be changed by its members: parish priests, curateurs, politicians, publicists, prosecutors, teachers, journalists, etc. etc. To do so, however, one needs courage and to listen to the words spoken by Pope Francis, but without overinterpretations by translators. Paths followed by the Church are determined by hard-headed politicians in cassocks, who do not seem to understand the seriousness of the role they should play today in the Church, in Poland, in the European Union.

So instead of being offended, think about the reasons for the criticism, where does it come from? And why? Draw conclusions: if you’re in politics, don’t take an offence at someone who stirs a polemical response to you.

If you do not want to be gravediggers of faith in Poland, if you do not want a political repetition of relations between the State and the Church in the style of Ireland or Spain, if you do not want to watch passively how in a few years time left-wing political parties will marginalise your voice in a political debate, taking away your wealth and privileges, start reforming yourself. Leave politics to politicians, stop legitimising violations of the law and the denial of the fundamental values of a democratic state by the governments of the Law and Justice party. Apologise for the wickedness committed and for the medieval ambitions to decide on the bodies and minds of women and make the Church again necessary for the people in need and confused.

GDPR: Looking back and looking forward
Kosovars want to travel. Why will Europe not let us?
Comment