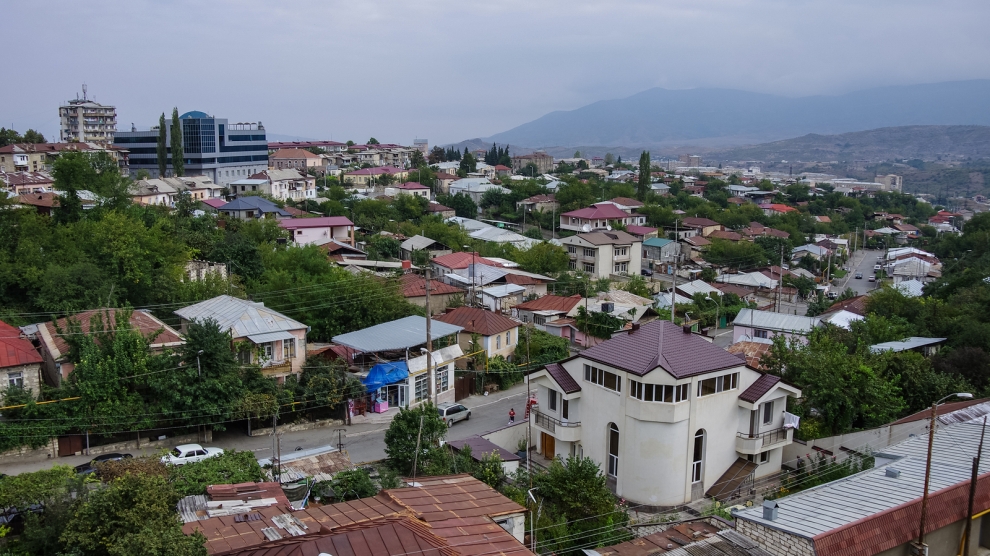 Dağlıq Qarabağ, together with seven districts on its margins, is a sovereign territory of the Republic of Azerbaijan that was occupied by Armenian armed forces during the bloody Armenia – Azerbaijan conflict of 1988-1994. Since the brokering of a ceasefire in 1994, the international community has not paid significant attention nor delivered clear messages towards the solution of such a protracted conflict, one that has generated over one million of Azerbaijan’s Internally Displaced People (IDP), causing a major humanitarian crisis that has endured to present day, and is a menace to European Union security environment and a threat to its energy supply routes.

On March 29, 2019, the president of Azerbaijan, Ilham Aliyev, held a meeting in Vienna with the prime minister of Armenia Nikol Pashinyan, to discuss the settlement of the Armenia-Azerbaijan armed conflict.

While the format of negotiations remained unchanged, the ongoing discussions among both countries, hosted by the OSCE Minsk Group Co-Chairs, did not produce any tangible outcome; nevertheless we have the inception of a new momentum in the negotiation process. Above all, it is imperative to ensure complete territorial sovereignty of Azerbaijan and convince the international community to exert pressure on Armenia to withdraw its troops from the districts of Kalbajar, Lachin, Qubadli, Jabrayil, Zangilan, Agdam, Fuzuli.

Without Armenia’s substantive actions to withdraw its troops and genuine good will in refraining from escalating the daily armed provocations in the line of contact against Azerbaijani soldiers, it is impossible to bring peace to the Southern Caucasus. Furthermore, the Armenian government must recognise that the protracted war in Nagorno-Karabakh and surrounding districts is not similar to the Cuban Missile Crisis of October 1962. The ongoing clashes in the lands of Azerbaijan are even more complicated and have affected its entire population, causing economic stagnation the Caucasus region, an environmental disaster in Azerbaijan’s occupied territories, and setbacks in the development of the Armenian national economy (thwarting the country from taking a quantum leap towards a free economy, fighting the war against corruption and consolidating democratic institutions). Europe must understand that Azerbaijan over the last decade has invested a great portion of its national budget towards accommodating the Azerbaijani families that were forced to leave the war torn region of Nagorno-Karabakh; today more than three hundred thousand Azerbaijani Women suffer from depression and psychological distress due to violent ethnic cleansing and cruel-barbarian mass murders orchestrated by the Armenian armed forces in their native villages in early 1990s.

The occupation and destructive policy of Armenia against Azerbaijan’s territory and its people, constant provocations on the border with the Autonomous Republic of Nakhchivan (Azerbaijan), including armed provocations by Armenian forces with heavy machine guns on April 11; illustrate a high level of mistrust that will accompany the regularly languid dialogue between Armenia and Azerbaijan. Result-oriented negotiations are not expected in the foreseeable future.

Meanwhile, the Nagorno-Karabakh region and its seven surrounding districts, in addition to ethnic cleansing conducted by the Armenian authorities against the innocent Azerbaijani civilian population (two decades ago), is currently deeply affected from high levels of deforestation, contaminated fresh water resources, and barbaric illegal mining enterprises that are ruining its soil fertility and forever destroying its farmlands.

Prime Minister Nikol Pashinyan recently issued a statement advocating for “an atmosphere of peace”, however the peaceful settlement of the Nagorno-Karabakh conflict is impossible without a complete withdrawal of the occupying Armenian forces from Azerbaijan’s territories and organising the return of the forcibly expelled Azerbaijani IDPs to these lands.

The Republic of Azerbaijan is a peace-loving country, a nation with a steady economic growth that has delivered tangible results in the war against poverty and malnutrition; a country with admirable infrastructure and urban development projects that are envied in Europe. Although 20 per cent of its territory is under Armenian occupation, the government of Azerbaijan and President Aliyev have shown a great sense of statecraft when it comes to solving this armed conflict by peaceful means. European security organisations and NATO must strive, in a coordinated effort, to bring lasting peace to the Caucasus and eliminate the persisting residues of a bloody conflict that erupted when the Iron Curtain was crumbling and Germany was reunified. Yerevan must be persuaded to embrace a timetable of actions that could raise the level of confidence and trust in the future negotiations with Azerbaijan; the first step must be the complete withdrawal of Armenian forces from Kalbajar, Nagorno-Karabakh territories. Armenia’s belligerent attitude, disinformation campaign, manipulative propaganda and slander against Azerbaijan are simply a minefield (highly hazardous) that must not be minimised by Brussels, Washington and Moscow. The Armenia-Azerbaijan conflict must receive an unabated approach by European Union security mechanisms; the OSCE Minsk Group of Co-Chairs has become a tool of Yerevan’s struggle to preserve its enduring status-quo.

At a time when Azerbaijan is commemorating its 100th anniversary of bilateral strategic partnership established with the United Kingdom, it is highly beneficial for all parties to have London play a greater role in this process. Simultaneously the White House’s good will and germane actions of President Donald Trump embody an optimistic future towards ensuring Azerbaijan’s recovery of its full territorial sovereignty, return of its IDPs in their native lands, and encouraging a brighter economic growth for Armenia and its people.

The talks in Vienna were a somewhat positive step forward, however European leadership has the indispensable duty to arrange containment measures while hosting multiple hors d’oeuvre sessions; but one thing is certain that EU and Washington are years away from striking a lasting peace in the Caucasus.

Slovenia and Croatia should be setting a better example for the Western Balkans
Slovakia: Can the coalition of values work?
Comment