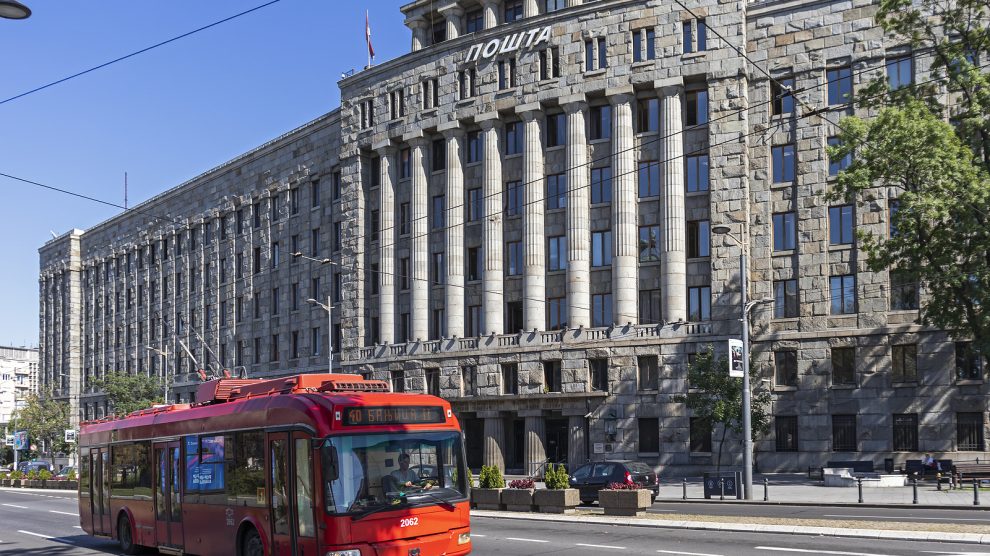 Belgrade is a city of many impressive landmarks. From the classical grandeur of the Victor Monument overlooking Great War Island to the bold, brutalist, and strange Western City Gate, lovers of architecture (of all kinds) are always in for a treat on a visit to the city.

But Belgrade’s most famous landmarks are not the only ones worth your attention. Here are five cracking buildings in the Serbian capital that go well under the radar: they certainly aren’t included on any guided tours.

BIGZ, or Beogradski Izdavačko-Grafički Zavod (Belgrade Publishing-Graphics Bureau), used to be one of Yugoslavia’s big publishing houses. Since then, BIGZ has faded, and so has the building that served as its home.

Yet the BIGZ Building, as it is still called, dominates the landscape when driving across the Gazela Bridge from New Belgrade to the Senjak settlement in the old part of the city.

An early example of modernist architecture in Serbia, construction began in 1936 and was completed in 1940. It became the seat of BIGZ during the last 1940s.

To say that the BIGZ building is today dilapidated would be an enormous understatement. However, appearances can be deceiving. For while it looks abandoned, it isn’t.

Over the years BIGZ has found a second life as a place where artists and musicians as well as various clubs could rent cheap space. For musicians especially, BIGZ is perhaps the only place in the city where rehearsal space can be found at an accessible price. Several now well-known Serbian bands such as Repetiror and SARS honed their sound at BIGZ.

Upcoming bands may soon need to find a new place to rehearse, however. BIGZ has a new owner who wants to convert it into high class office space.

In the very heart of Belgrade, minutes from Republic Square and right across the busiest McDonald’s in Serbia is a building that has been mystifying visitors for more than 13 years.

It’s easy to see why. Little more than a reinforced concrete skeleton, the presence of such an object in the most prime real estate location in the city is baffling.

It’s a prime example of something called ‘Bosnian Art Deco’ — the catch-all name used to describe buildings left unfinished in the aftermath of the dissolution of Yugoslavia. The most notable features of Bosnian Art Deco are bare facades and unfinished floors — and Beobanka has those in spades. In fact, it’s facade is so bare, it doesn’t even have one.

The building was originally built in 1982 by Energoprojekt, a Serbian construction company, for its own use. Sometime later, Beobanka, the now defunct Serbian bank, moved into the tower part of the complex.

When Beobanka went under in 2002, the tower was abandoned. For reasons that remain something of a mystery, the building was stripped of its facade and cladding in 2007, leaving only the concrete bones.

According to Belgrade’s current deputy mayor, Goran Vesić, Beobanka won’t be naked for much longer. Vesić said in April that the building’s new owners, Stuttgart-based Stattwerk, are set to begin work on reconstructing the tower.

Whatever Stattwerk comes up with is unlikely to be as arresting as the Beobanka skeleton.

Belgrade’s many visitors tend to limit their excursions to New Belgrade to the bank of the Sava where all the river raft clubs are. This is a mistake, as the entire New Belgrade settlement is an architectural marvel, dotted with beautiful examples of brutalism.

But it’s not just brutalism that stands out in New Belgrade. A short walk from the rafts and the upscale Ušće shopping mall is the YU Business Centre (YUBC), a mixed commercial-residential complex that definitely jumps out from the sea of grey brutalism and newer glass business towers.

It’s another entry in Energoprojekt’s prolific portfolio, originally designed in 1989 but not finished until 2007.

What makes YUBC so interesting is how the architect, Mario Jobst, embraced ornamentation in a part of the city practically defined by a lack of it. The bright red metal details, according to Jobst inspired by the Danube and ship’s sails, simply demand attention from passersby.

It’s not the first time Jobst used red nautical-inspired ornaments. He also designed the famous “Dejtonka” gas station in the 1990s, whose roof was inspired by waves. Made operational at the same time the Dayton Accords were signed (hence the name), it has sadly since been torn down.

Church of St Anthony of Padua

As a metropolis in a multi-confessional environment, there’s no shortage of places of worship in Belgrade. Many of these are landmarks in their own right, such as the Temple of St Sava and the Church of St Mark.

Tucked away on one of the hills in Vračar, overlooking the municipality of Zvezdara, is the unique Church of St Anthony of Padua.

It consists of a rotunda with an apse in the east, porch in the west, and a large cylindrical bell tower in the southeast. It’s the bell tower that draws the most attention with it’s monumental 52 meters-high scale.

The church was built between 1929 and 1934 and was designed by the celebrated Slovenian architect Josip Plečnik. It’s the only building in Belgrade designed by Plečnik.

But Plečnik is not the only famous artist who contributed to the church, as the interior hosts a bronze sculpture of the patron saint holding the infant Jesus Christ by the skilled Croatian sculptor Ivan Meštrović.

Even though it’s a fair way off the beaten track, the church is well worth the trip as there’s no another quite like it anywhere in the world. 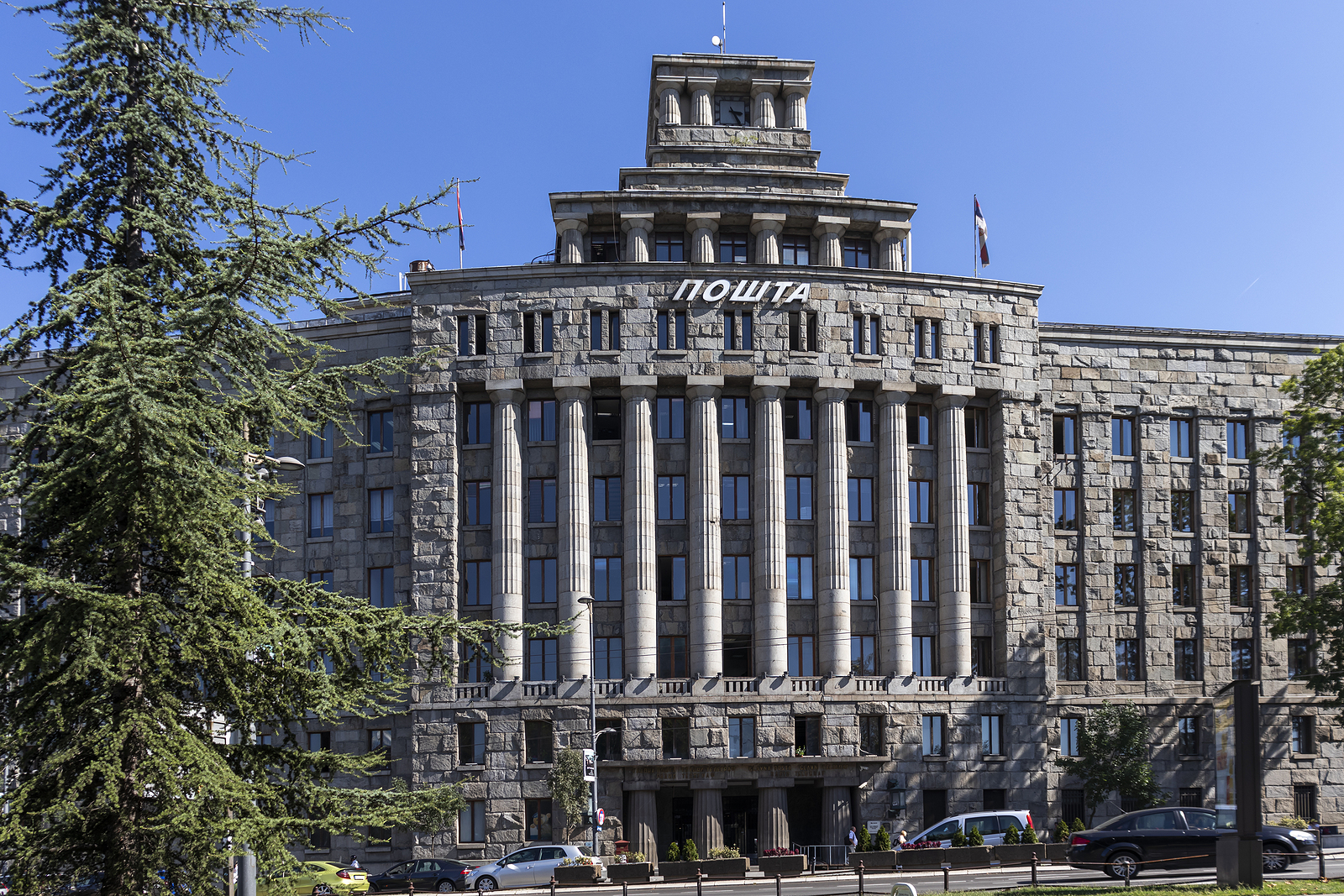 This last entry might be cheating a little bit, as the building in question is home to two rather important Serbian institutions — the Serbian Post Office and the Constitutional Court.

However, the building is often overshadowed by its neighbour across the street — the National Assembly building.

Yet those who have an interest in architecture should not miss it. Built in the interwar period, it was designed by the Russian architect Vasily Androsov. It is in fact his only “profane” project, as the architect primarily designed churches.

In addition, it is historically significant as a rare example of the Russian academism architectural style in Serbia.

Originally built for the use of the Poštanska Štedionica (the first bank in Yugoslavia) as well as the post office, a second part of the building (accessible from King Aleksandar Boulevard) once housed the national bank, but since 2013 has been the home of the Constitutional Court.

While lacking the immediate impact of modernism or the stately grandeur of the neoclassical National Assembly, the understated design and stern facade make one thing clear — this is an important building housing important institutions full of important people.