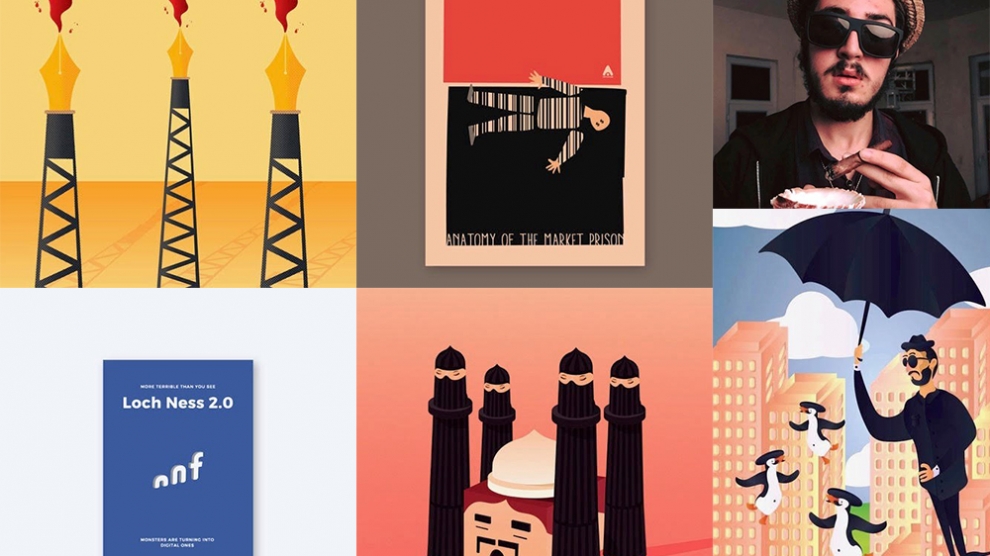 Nihad Jafarov is a young visual artist from Azerbaijan, who in 2018 founded the ArtChaos group, specialised in digital painting, filmmaking and videography. He spoke to Nijat Eldarov about the role advertising, amongst much else, is playing in the devlopment of the visual arts in Azerbaijan.

Unlike many kids, Nihad Jafarov was not a fan of computer games. He did, however, love computers. And he loved art. Discovering Adobe Photoshop was therefore something of a revelation, opening up a road towards the digital work he produces today.

“It took me many years of my life to learn the tools and algorithms, and left me with a huge portfolio of test work that – while they took a long time to put together – should never be seen by the public,” he says.

Admitting that he is a bigger fan of Warhol than Rembrandt, Jafarov says that he can feel art in his soul.

“Art is undoubtedly the most utmost form of self-expression,” he tells me. “It is the only form which can travel from petroglyphs to social network stickers, yet still maintain its authenticity. Even the most extreme art piece – which has a power to step on values – possesses peaceful self-expression which cannot engender a physical harm towards anyone. Notwithstanding, any self-expression needs a broad audience and a secure environment.”

Jafarov believes that social media offers digital artists a perfect platform for self expression. “Moreover, some digital artists can make more profit than painters without spending money on colouring products,” he adds.

The visual arts – not least those produced in a digital format – are a fast-developing field in  Azerbaijan. The challenges emerging artsists face, however, are many.

“First and foremost, none of the secondary and higher educational institutes provides innovative teaching of the digital spheres, in particular, artistic visual fields,” says Jafarov. “I have repeatedly underscored the necessity of a combination of subjects related to IT and fine arts in the Azerbaijani education system.”

“Many of my colleagues engage in successful visual arts projects both locally and globally, and the majority of them owe these achievements to their personal self-development, through manifold failures,” adds Jafarov. “I still do not believe that talent is extraordinary. Indeed, art does not just sum up the knowledge of technique; successful works demand taste, along with hybrid thinking and good vision. Azerbaijani youth are craving for the real professors that would invite them to the philosophy of arts through their conversations and experiences. These professors do not have to teach in an educational institute, by the way. I think that the pioneers of this domain – the young people themselves – have to take their own steps and wake up their inner Walter Gropius, who set up the Bauhaus school along with his artist colleagues. It is already more than a year since we, as Artchaos Group, have been engaged in multidimensional commercial and non-commercial artistic activities, together with local artists. Today the biggest barriers facing young artists are heated rivalry, absurd criticism and an intolerance towards criticism.”

Jafarov’s work raises awareness on a number of social topics, such as gender, religion and politics. Does he think the visual arts contribute to the social change?

“Well, I feel like a successor of Azim Azimzade, an Azerbaijani painter who was once beaten for bringing paint to the religious school. The geography I am a part of has been familiar with illustrations on social topics since the beginning of the last century through the Molla Nasraddin satirical magazine.”

Molla Nasraddin was an Azerbaijani satirical magazine published in 1906-1917, 1921 and 1922-31, touching upon issues such as politics, religion and gender inequality. It is considered to have been remarkably similar to the French Charlie Hebdo satirical weekly magazine. Jafarov admits to being inspired by its contributors.

“Although I am disappointed that many of the topics and problems depicted in Molla Nasraddin persist to this day, I have undoubtedly drawn inspiration from its contributors. Societies revolutionised through art have been disposed to managing themselves independently, but this is not an immediate process, notably now, in the age of globalisation.”

Jafarov views artists as having a key role to play in shaping the modern world, and feels that digital works can have an even greater impact than the traditonal arts.

“Every day I see inspiring motives in the public transport, streets and the narrow estates of my childhood. Presenting them to the audience through cultification serves to eradicate these problems with the passage of time. Visual arts, particularly, have an influence on urban life, and I would recommend, to anyone interested in this subject, a work by Christoph Niemann, the illustrator of The New Yorker entitled The Abstract City, which is about his hometown. Artists such as Marco Melgrati and Davide Bonazzi have raised awareness of global problems with huge audiences. This exhibits the stronger impact of productive digital works on our communities in comparison with traditional arts. Speaking globally, we, the free artists, are actually living in cages like other people. However, our cages are bigger in size. An artist, in order to defend his or her views, should think of vital topics wisely and to the extent he or she does not care about his life.”

That visual communication is limited to social media and smartphone screens is a common misperception Jafarov is keen to eradicate.

“The world is still enthusiastically reading magazines such as The New Yorker, The Economist or Popular Science whose content is rich with digital illustrations. Magazine culture is not popular in Azerbaijan and therefore, our new generation digital artists lean towards the world of advertising, as the economic market is not compensated through mass media. As such, most of the works addressing social issues are non-commercial and products of the artists’ personal creativity. However, there is speedy progress in this sphere owing to the emergence of advertising culture,” he says.

“An Azerbaijani is principally born for the arts,” Jafarov says. “An Azerbaijani is more emotional and more honest than needed. It is enough to be familiar with the life of Absheron school painter Rasim Babayev, in order to understand that. And yet we are in the bottom position in our region in terms of visual arts. In many of the global poster competitions in which we take part, we find Iranian artists as jurors. They have become well-known by objecting to the world they live in through the visual arts. To my consideration, at the moment we have to accept the reality of our benefits from advertising culture and we have to take greater steps in order to improve this from a social perspective. We cannot save the world like superheroes, but it is in our hands to change certain factors with the work we produce. Tastes are not taught, they can only be disseminated.”