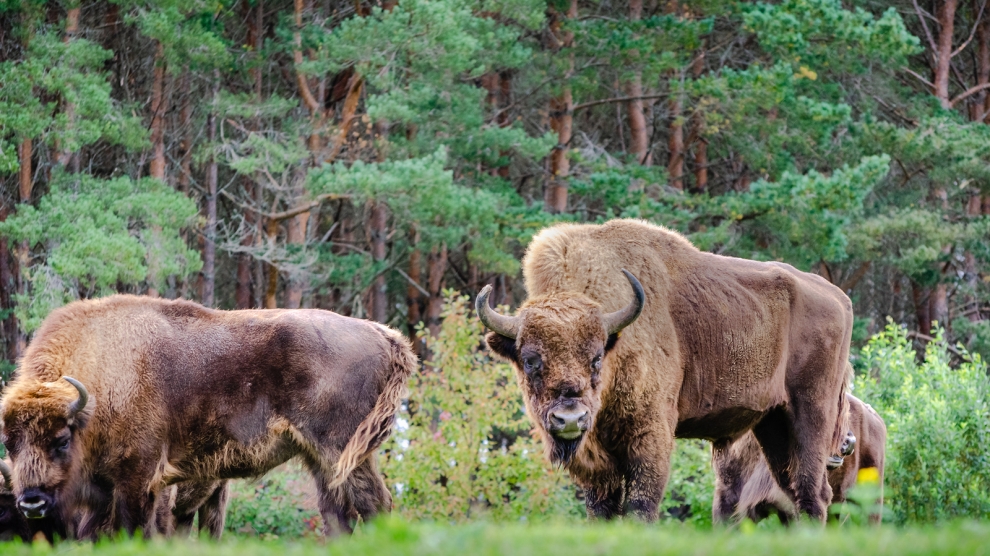 The new year began with some excitement for the rangers in the Tarcu mountains of Romania, when they discovered a young bison near the village of Rusca, trapped in some wire probably left by a poacher. Born to parents reintroduced to the area through the Life-Bison Project, the calf was less than a year old.

Thanks to some exemplary mobilisation, the calf was freed after just a few hours and returned to his mother, who was nearby together with five other bison. The calf was found at around 2pm by WWF-Romania rangers Daniel Hurduzeu and Matei Adrian Miculescu, who were monitoring bison activity in the field. They immediately informed the police, the local environmental office and the hunting administration. Under police supervision, veterinarian Ciprian Hodor tranquilised the calf and the team were able to release it. Blood samples taken before the release will be sent to the Senckenburg Nature Museum in Frankfurt for DNA testing. Since the calf was born in the wild, the test will help determine the parents.

The rescue operation lasted no more than four hours, and by early evening the youngster was awake again and in the company of fellow bison. The rangers continue to check on the well-being of the calf and the group. With possible poaching suspected, the local police department will open a criminal file to investigate the incident.

Once widespread across Europe, the majestic wild European bison were driven to extinction in the early 20th century by poaching and habitat loss. The last wild European bison was poached in the Caucasus in 1925, leaving less than 60 animals alive in zoos and private parks.

The ongoing bison reintroduction programme launched by Rewilding Europe and WWF-Romania back in 2014 is the largest ever attempted in the Southern Carpathians. The first two bison releases took place in 2014 and 2015, followed by a third in June 2016 as part of the European Commission-funded Life-Bison Project, with annual releases now ongoing. In 2018, another 23 bison were released into the wild, including 14 animals at a second rewilding site in the Poiana Rusca mountains. There were further releases in 2019.

Thanks to breeding and reintroduction programmes across the continent the current population of wild and captive European bison now stands at around 7,000 individuals.

Nevertheless, the European bison is one of the most threatened large mammals in the world, and it is protected at European level.

The overall objective of the Life-Bison Project, which runs until December 2020, is to establish a wild bison population that is demographically and genetically viable in the Southern Carpathians. Sub-populations will be connected by ecological corridors to enable migration and genetic exchange.

Bison bonasus, the largest land mammal in Europe, is a key species for preserving wilderness strongholds. The bison’s browsing ability in the search of food helps maintain a mosaic of forested areas and grasslands, a landscape which is highly valuable from an ecological point view, with its diversity and abundance of species and natural resilience in the face of climate challenges.

Moreover, the bison is a species that, if successfully re-introduced and its habitat actively preserved across the entire Carpathian mountains, will help maintain ecological corridors on a large scale, allowing for species migration, be it the bison itself or other large carnivores such as the brown bear, the wolf or lynx. It needs large areas of prime quality natural environment, with very little or no human disturbance, which also allows for other wildlife species to thrive.

A short yet beautiful documentary film was released late last year showing the reintroduction of the European bison through the eyes of the local people in the community of Armeniș in the Southern Carpathians. Called Zimbrul (Romanian for bison), the nine-minute film was shot by award-winning French filmmaker and photographer Emmanuel Rondeau of White Fox Pictures.

You can watch it below.

The increasing attractiveness of rural life
Doubleplusungood: How the language of ‘good change’ is taking over Poland
Comment