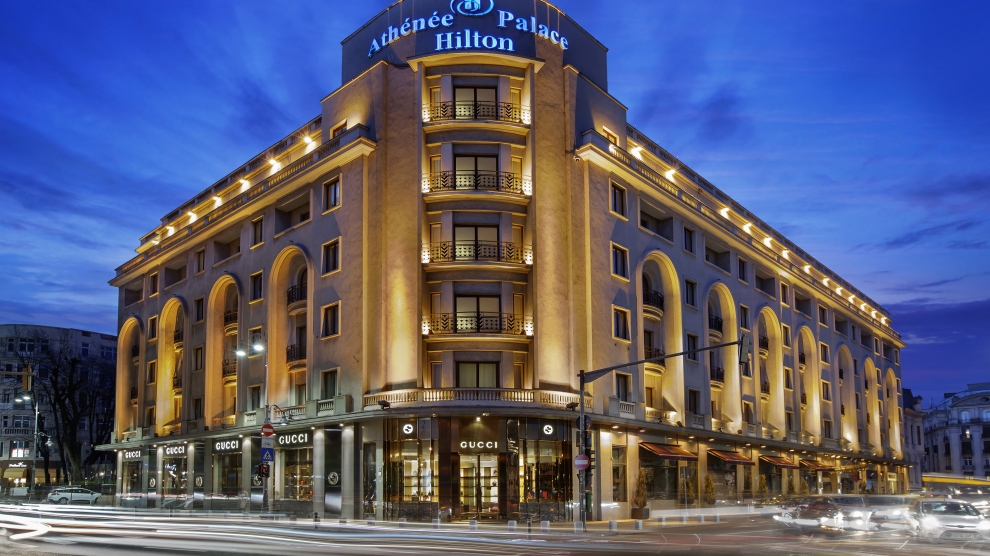 Craig Turp dives deep into the past - and the present - of the Athénée Palace Hilton in Bucharest, the first in a new series featuring the finest hotels in emerging Europe.

When I first moved to Bucharest in 1998 the Athénée Palace Hilton meant one thing: Sunday Brunch. In those days before social media it was where the city’s foreign residents would gather to catch up with the week’s news, gossip, and occasionally cut the odd deal. It quickly became an institution and a favourite expatriate tradition. Whole families took their regular tables and while the style of the brunch may have changed as executive chefs came and went, all wanting to embellish and make their mark on what is one of the hotel’s culinary showpieces, the spirit of those original brunches in the 1990s was preserved: a relaxed, laid-back extravaganza of a repast that extended long into the afternoon as brunchers tucked into a lavish spread of the finest food served with lashings of sparkling wine. Every other major hotel in Bucharest has since tried to create a similar atmosphere at their own brunches, and not without success. But for many of us who have lived here for some time, brunch in Bucharest will always be synonymous with the Athénée Palace.

“The hotel has a history of doing pioneering things,” says Rainer Gieringer, the current manager of the Athénée Palace. “Brunch was one of those things which was just that. Cabaret, dinner theatre evenings and, this summer, our smoked barbeque out on the terrace have all been new for Bucharest. We have a habit of doing things first.”

Those early Hilton brunches were my own introduction to the world of luxury hotels, for which I quickly discovered a weakness. The attraction is not the sumptuous rooms, the extra care taken by the staff or the often regal breakfast buffets which, in a number of places I have been lucky enough to stay on my travels around emerging Europe, have often included Champagne. And nor is it the Sunday Brunch. It’s far more than that. It’s the overwhelming sense of grandeur that these hotels convey, a sense of being part – if only fleetingly – of a luxurious world usually inhabited only by the rich and famous.

Emerging Europe boasts a surprisingly large number of such establishments. Historic, luxury hotels which have somehow managed to survive the ravages of war, fascism, communism and revolution not only intact, but in many cases with their magnificence amplified many times by the intrigues and goings-on which took place at these palaces of gold in the past.

Bucharest’s Athénée Palace is perhaps the best-known and most historic of them all. Today a Hilton property, the hotel has had a starring role in just about every major event in modern Romanian history. Few hotels make the history books: the Athénée Palace has history books dedicated to it.

Rosie Waldeck, an American reporter, lived at the Athénée Palace from 1940-41 as a correspondent for Newsweek. She arrived in Bucharest on the day Paris fell to the Germans. Bucharest at the time was a hotbed of espionage – Romania had not yet officially entered World War II – and for journalists it was the perfect location to cover events in this part of Europe. Everybody stayed at the Athénée Palace, and those who didn’t drink here, at its English Bar. Even German generals on secondment, billeted elsewhere in the city at the Minerva Hotel, would spend as much time at the Athénée Palace as they could. If the Romanian capital was, in those years of so much uncertainty, the centre of Europe, then the Athénée Palace was the centre of Bucharest. Waldeck, in her book, Athene Palace, called it the Forum of the Balkans:

“In the lobby of the hotel, old post-world war Europe and new-order Europe were acting out their parts in this drama. It was an epic setting, for in the last twenty-five years this lobby had been the forum of the Balkans. Here secrets of the alcove, secrets of court, secrets of diplomatic pouches were whispered into ears that miraculously turned into microphones. Here opportunities were made and destroyed; here stories were invented and from here spread like epidemics; here the skeletons of all the Balkan closets were promenaded and laughed at, and gossip sold short the honour of every politician and the virtue of every woman. Nobody minded it, not even the victims.”

That Waldeck – a Jew – had an affair with a German general while staying at the hotel and nobody batted an eyelid is just one of the many stories that demonstrates the somewhat ambiguous attitude Romania as a country had to the war. It would have preferred to have stayed out of the conflagration engulfing Europe entirely. That it didn’t is the fault of its military leader Ion Antonescu, who later in 1941 would take a fateful decision to join the Wehrmacht in its invasion of the USSR. But such things are beyond the scope of this piece.

The Athénée Palace was built between 1912 and 1914 by French investors to the designs of Teophile Bradeau, a French architect. Art Nouveau in style and boasting every luxury available at the time, it immediately became the preferred pied-à-terre of le tout Bucarest, in those days achingly Francophile. “It was instantly popular,” says Ernest H. Latham, historian and cultural attache at the US Embassy in Bucharest from 1983-87. “It has always managed to secure a key place in history.”

“The history helps,” Mr Gieringer tells Emerging Europe. “It is a strong marketing tool. Google Bucharest and the hotel appears. It is part of the city, part of the city’s history, not least the English Bar.”

The so-called English Bar, built in the style of an English saloon, was an early addition to the hotel, and Romanian royalty, nobility, wealthy merchants, stars of stage and screen and international visitors all made it their regular haunt. It plays a leading role in Olivia Manning’s Balkan Trilogy, another book whose action is set in and around the hotel. It remains today, still serving the Romanian capital’s most immaculate pint of Guinness and very much the default ‘meet you there’ venue for foreign residents.

The hotel has been renovated, and partly remodelled, a number of times. The first was in 1937 when the Romanian architect Duiliu Marcu modified somewhat the facade to give it a more Art Deco look. Then, having been hit by allied bombs in 1944 (the intended target was the Gara de Nord, Bucharest’s railway station), part of the hotel caught fire causing extensive damage. When it was renovated after the war, the hotel – which by this time had been nationalised and was the property of the Romanian state – became a listening post. The Romanian secret police, the Securitate, conspicuously bugged every room, every corner and every alcove, and the staff – from the manager to the bellhops, were Securitate agents. Laughing, Mr Gieringer assures me that these days, the hotel’s managers do not need to be Securitate agents.

The hotel survived the massive earthquake which hit Bucharest in 1977 intact, as all around it other buildings crumbled. It then took a grandstand seat for the events of December 1989, the Romanian Revolution. When fighting broke out on December 22, the hotel was hit by stray bullets, and people took refuge inside. The bullet holes remained until the hotel was privatised several years later, before being closed for the biggest and most luxurious refit of its life: a total overhaul to bring it up to Hilton standards. It reopened as the Athénée Palace Hilton in 1997, with the first guest to check-in being David Funderbunk, the US Ambassador to Romania from 1981-1985. The hotel features in his memoir of life in Nicolae Ceausescu’s Romania, Pinstripes and Reds.

Today’s Athénée Palace Hilton offers 272 rooms, including a number of suites, of which the most plush – and the most expensive – is the presidential suite, set over two floors with views to Piata Revolutiei and the former Royal Palace. It has hosted royalty, presidents and prime ministers from all over world, as well as stars from every field of entertainment imaginable. Many of them grace the hotel’s Wall of Fame, at the entrance to the Cafe Athénée, a popular lunch and early-evening eatery whose cakes are almost as famous in Bucharest as the stars in the photos on the wall.

Many of the staff have seen them all, serving as they have for more than 20 years. “This is a prestigious place to work,” says Rainer Gieringer. “Families take pride in having somebody they know work here. ‘My son works at the Athénée Palace’: it’s something to boast about.”

Mr Gieringer wants to see more photos in the hotel. A keen photographer himself, at some of the luxury hotels he has managed (including the Hilton Istanbul) he has previously led photography sessions, taking staff to places around the country in order to capture scenes which can be sold in the hotel, as postcards, for charity.

“We are an important part of the community and it is important to give something back,” he tells me. “I want to launch a photo project here, to raise money for the renovation of a school in the countryside. Many of the charity projects in Romania focus on the cities, and the countryside, where there is also a real need for assistance, sometimes gets overlooked. It would be great if the hotel could help make a difference.”

In the Athénée Palace’s magnificent lobby – a marbled colonnade – there is a small exhibition which tells the story of the hotel’s past. Sadly, however, there is not currently a formal archive, although Mirela Burlacu, in charge of PR at the hotel, is patiently trying to create one.

“I look out for old photographs, and sometimes people simply contact us when they find photos amongst old papers,” she says. “Just recently a lady offered us a photo of an event being held in one of the hotel’s ballrooms.”

The spectacular ballrooms are as popular today as ever: not least during the summer when they host society weddings. Then there’s New Year’s Eve, traditionally the biggest and most extravagant party of the year. “New Year’s Eve parties here have always been legendary,” says Ms Burlacu. “They are always oversubscribed and we sell out long before the end of the year.”

“New Year’s Eve parties are important everywhere, but I have noticed that people in this city love to party on New Year’s Eve more than in almost any other,” adds Mr Gieringer. “Le Diplomate ballroom is the perfect place to do so.”

Le Diplomate, complete with stained glass in the ceiling, is a historic monument in its own right, part of Romania’s National Heritage collection. “It’s unique in the region,” says Mr Gieringer. “It sells itself.”

The same could be said for the entire hotel. Whether you come to the Athénée Palace for a Guinness at the English Bar, a wedding, a New Year’s Eve party or you are simply staying at the hotel, it is difficult to leave without already planning your next visit. Few places so perfectly encapsulate all that a luxury hotel should be. Now into its second century, the Athénée Palace looks fair set to be at the centre of events for many decades to come. A true forum of the Balkans.