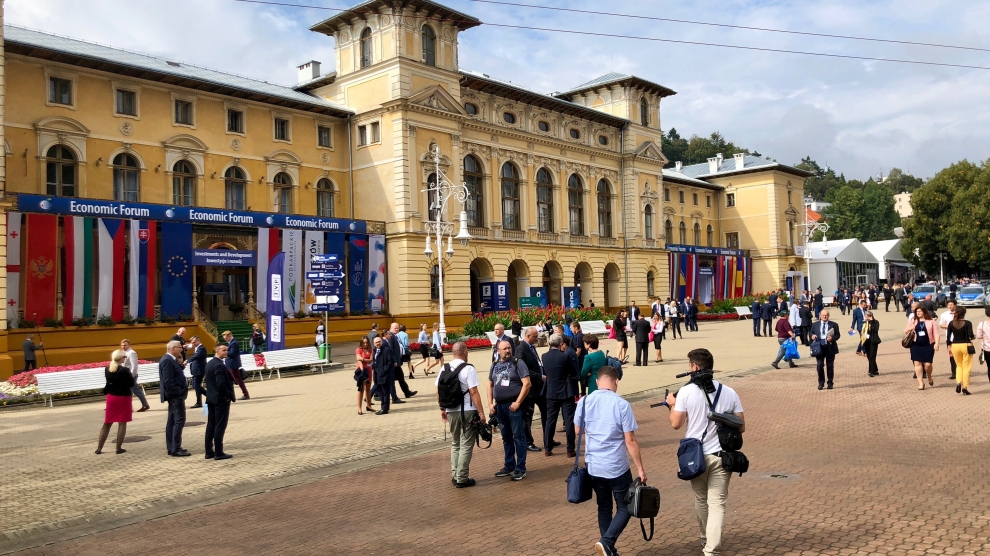 It’s not easy to get to Poland’s Krynica Zdrój, a tiny town on the southern border with Slovakia. Kraków, the closest large city, is 150 kilometres or a two-and-a-half-hour drive away. Instead of a brand new motorway with a smooth-flowing traffic which now cross the country, there is a narrow dual-carriage way with plenty of small villages along the road, back-breaking turns and curves (especially when you approach Nowy Sącz) and breath-taking views of small lakes and the Beskid Mountains.

I opted for a flight to Kraków and originally a train further south as I thought there would be a direct one. I soon learned at the information desk I would have to change in Tarnów and the entire trip would take over six hours. It seemed a bus would be my only option. I searched for one online and found a local company called Szwagropol — this must be a family business, I thought, as szwagier means brother-in-law in Polish. The firm offers direct connections every 40 minutes so I went for it. I got a ticket online and planned on catching my 8:10am bus.

In the morning I got an Uber to the bus station. The driver, a young Ukrainian from Khmelnytskyi who has lived in Poland for over three years, was driving as fast as he could but because of road works we arrived when the bus was leaving. I ran to the bus and the bus driver, wearing a white short-sleeved shirt and shades, stopped but did not say a single word. Just scanned the ticket and moved on.

I was welcomed with a blare of disco polo, a rather peculiar and uniquely Polish sub-genre of dance music, which — as Culture.pl’s Foreigners’ Guide to Disco Polo explains — is like McDonald’s: no one wants to be seen enjoying it, yet everybody does. It’s 50 per cent disco and 50 per cent folk music, the tacky but catchy genre is essential at weddings and in provincial bars. And as my case shows, also on buses. Fortunately, after a while, the driver switches on a new radio station and we are saved.

The bus is quite empty. There are only a handful of people around me: an elderly couple who seem to be going to a sanatorium, as Krynica is known for its healing spring waters, a young local journalist on the phone boasting about his recent story going viral and a priest using the Breviary and saying his morning prayers.

I arrive in Krynica just before noon and although the 28th Economic Forum hasn’t officially started yet, I can see the same buzz which I witnessed each of the five times that I took part in this biggest and oldest event in central and eastern Europe before: small entrepreneurs making final preparations for their largest revenue opportunity and delegates wearing suits and pulling their carry-ons.

Each time I come here I always wonder how this small town manages to transform from a quiet resort into a centre of politics and business — an Eastern Davos, as it has been often nicknamed — attended by thousands of people not only from the emerging Europe region but the entire Old Continent, the Middle East, Russia, Central Asia and the US. This year the organisers expect more than 5,000 people to attend. For a journalist, like myself, it is a great opportunity to speak to politicians and business leaders as they all walk down the main pedestrian street.

Two years ago I came to Krynica to chair a panel about how Brexit would impact the inflow of foreign direct investment into the region. This year I am moderating a discussion about the post-Brexit financial sector in Europe with senior representatives of the European Commission, the European Institute for Financial Regulation, the Czech National Bank, the French Financial Markets Regulator, amongst others.

What makes all these people want to come to this tiny town in the mountains, even though it is so hard to get to? Perhaps they come here because they can talk big business and big politics in a small and quiet place? Zygmunt Berdychowski, the founder of the Forum once told me that during those three days in early September the heart of central and eastern Europe beats here. Perhaps they all want to hear that heart beat?