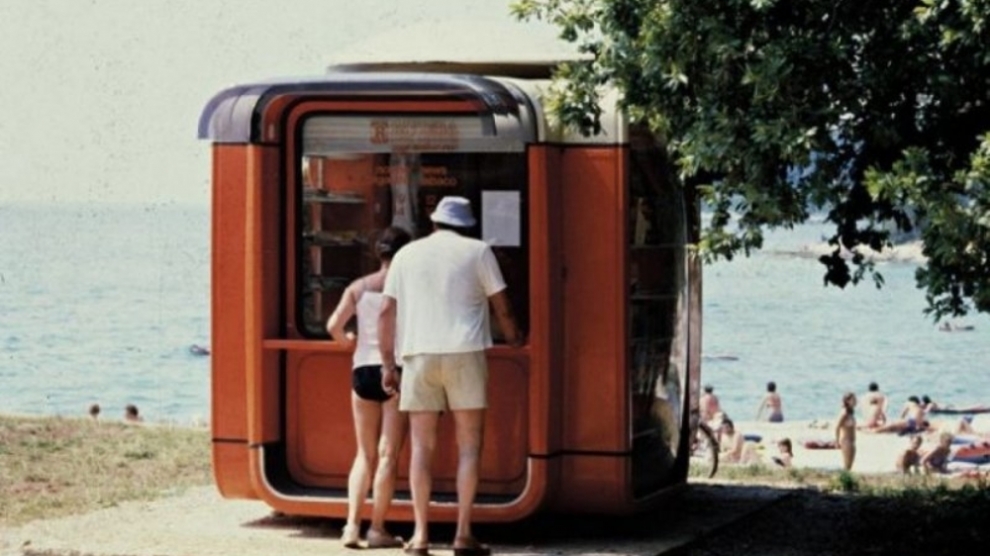 When Slovenian architect Saša Mächtig designed the K67 kiosk in 1966 he probably couldn’t have imagined how ubiquitous it would become.

For decades it was a common sight across all six of now ex-Yugoslavia’s republics.

Anyone who lived in the now defunct nation in the 1970s, 1980s or 1990s most likely bought a pljeskavica, a newspaper, or a lottery scratch ticket from one the iconic small and usually red kiosks.

In some other places, the kiosk served as a reception desk within a larger building, a guard house near an official building, and much more. It’s not really possible to compile a list of everything it has been used for, as its modular design offers the possibility of nearly endless configurations.

They key word is modular. While the units would usually be seen on their own, dotting the streets around Yugoslavia, they could actually link up. In this way, the kiosk could potentially be used for any application. Link enough of them and you could build an entire cafe or office, as some actually did.

The kiosk’s designer, Saša Mächtig, was born in Ljubljana in 1941 a few years before Yugoslavia would become a socialist federation. By the time he was studying at the Ljubljana School of Architecture in the early 1960s, the country’s planned economy has started to pick up steam.

It was within the planned system that the first wave of modernisation of Yugoslavia began, and it brought with it urbanisation, industrialisation, and the beginnings of mass production of consumer goods.

These were trends Mächtig was well poised to tap into, as this new order of things asked for products that were simple, cheap, modular, and easy to mass manufacture. His K67 kiosk was all of those.

It all began quite by accident, as Mächtig found out that city planning officials were looking for a new kiosk to use in Ljubljana. He prepared the design himself, while embracing new materials and the idea of mass production.

“In its modern interpretation the kiosk allows the possibility of growth and change, in purpose perhaps similar to Scandinavian cupboard systems and in terms of design to automotive bodywork,” he said when he unveiled his product for the first time.

All the kiosks that came before, in his view, were too big, too bulky, too much like houses whose purpose can’t easily be changed.

Instead, the K67 could be easily moved, assembled and disassembled, and featured its own modular interiors – shelving systems, light fixtures, and different types of canopy.

And it was made from new and cheap materials – primarily reinforced polyester.

In 2016, the Museum of Architecture and Design in Ljubljana organised a retrospective of Saša Mächtig’s work where visitors could see a refurbished K67 in all its glory.

“His kiosk became an icon of Slovenian design, and Mächtig himself almost a brand name. Mr Mächtig is a story of success of superior design; an inspired designer who infuses traditional objects with something special, recognisable and distinctive,” wrote the CEO of Slovenia’s white goods firm Gorenje, Franjo Bobinac, in the exhibition’s catalogue.

The unique and innovative design caught the eye of industry experts outside of socialist Yugoslavia too. In 1970 the completed prototype was featured in Design (an influential architecture magazine at the time) and very soon a kiosk was added to the collection of the Museum of Modern Art in New York.

But where the kiosk truly lived, and some of them still live to this day, is on the streets of nearly all Yugoslavian towns. The K67 remains one of the most iconic designs of Yugoslavia’s modernist period, even if most people probably don’t know its name and history.

Around 7,500 were made in total, and can still be seen occasionally, if you keep your eyes open.

As for Mächtig, in 2017 he was awarded a Lifetime Achievement Award by the Slovenian Design Society. After the kiosk, he continued working on the micro elements of urban architecture producing waste bins, bus station shelters, and public payphone booths while also teaching at universities.