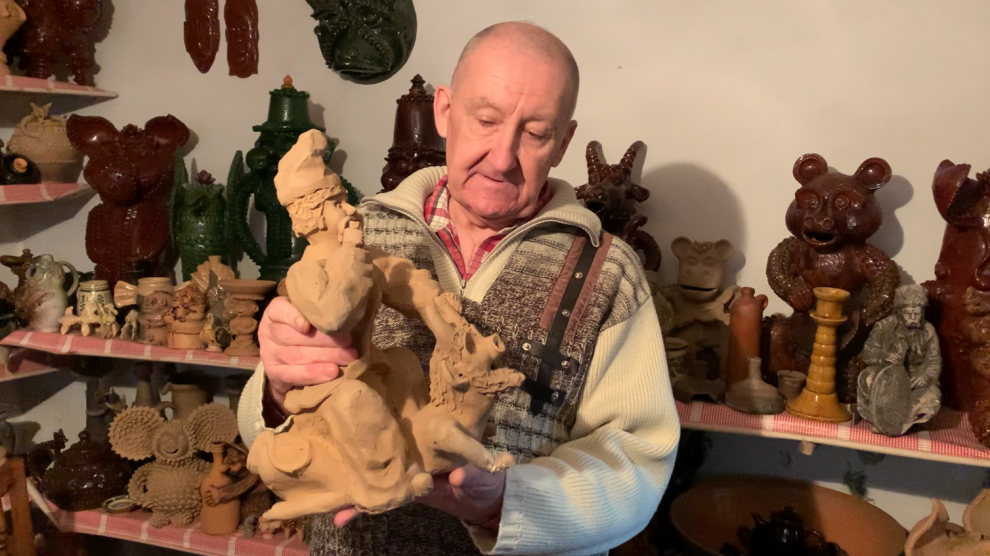 The work of a Ukrainian pottery master might seem worlds away from blockchain technology, but the Ukrainian NFT Art Centre Bridge is aiming to close the gap between traditional and digital art by turning traditional pottery into non-fungible tokens (NFTs).

Pottery is an important part of traditional Ukrainian culture and an art form with which many of the country’s people pride themselves.

The craft is practised all throughout the country, but no other town is as famous for its unique, high-quality pottery as Opishnya, a small settlement more than 200 kilometre east of Kyiv, and long known as the pottery capital of Ukraine.

Pottery from Opishnya has been sold at auctions around the world, including London, New York and Paris.

One of the most important contributors to the maintenance of Opishnya’s heritage is Ivan Ivanovich Loboichenko, who also numbers himself amongst the last surviving students of such luminaries of the town’s iconic craft as Ivan Bilyk, Oleksandra Selyuchenko, Vasily Omelyanenko and Trokhim Demchenko.

This NFT of a clay figure named B’lacksmith Vakula riding the devil was crafted by Loboichenko in 1981 it represents the main character in the novel Christmas Eve by Ukrainian author Nikolai Gogol, on which Tchaikovsky’s 1896 Ukrainian-themed opera Vakula the Smith was also based.

Despite Opishnya’s reputation, residents of the town have found it difficult to adapt to contemporary methods of advertising and selling art, and many are struggling to make ends meet, argues Valentin Korobko, blockchain developer and co-founder of Bridge.

“I have loved art since childhood. Unfortunately, even in today’s world, many talented people are cut off from the online world for various reasons. Most of these people live in poverty since their life is based on the process of creativity and they are far from business and sales,” he tells Emerging Europe.

“That is why we decided to offer them a bridge between the offline and the online world. Our mission is to make these talented people popular and recognisable, as well as to show their masterpieces to the whole world so that their work will be appreciated.”

When the market in NFTs (a non-fungible token is a unit of data stored on a digital ledger, called a blockchain, that certifies a digital asset to be unique) exploded in March this year, Korobko, along with colleague Dmitriy Laguta, were quick to establish their own NFT enterprise.

Their project involves taking 360-degree images of Loboichenko’s classic artworks, turning them into NFTs and sharing them on NFT crypto marketplaces such as OpenSea, BitClout, and hic et nunc.

This NFT  is of a piece from Loboichenko’s 1991 collection Sorochinskaya Fair. Named after a story of the same name, also by Gogol, it depicts how pottery was traded in the region throughout the 19th century.

An NFT can be any digital data stored on a blockchain, but its potential has recently grown increasingly popular amongst (usually digital) artists looking for a way to exchange their craft for cryptocurrency.

Selling an NFT of an artwork does not mean selling the copyright to it, nor its physical form (if there is one).

The unique and non-interchangeable nature of NFTs has been described as a certificate of authenticity or a type of signature. Their value fluctuates after the initial purchase, with many NFT enthusiasts hoping to see a considerable return on their investment in this type of art.

This piece of work represents one of Loboichenko’s earliest creations, made with the help of the well-known Ukrainian pottery master of the past, Oleksandra Selyuchenko. It has been described as a folk toy in the Oposhnya style.

However, Korobko and Laguta, who are already successful co-founders of the Kyiv-based business development company for food and technology distribution KaplinkExpo, are not primarily out to make money.

“Bridge is more of a social project – we give most of our proceeds to creators and artists,” Korobko tells Emerging Europe.

Purchasing an NFT from Bridge is therefore a unique opportunity to support an important aspect of Ukraine’s cultural heritage, one that is unfortunately under threat, while also making an investment in the rapidly growing NFT market.

In addition, 10 per cent of profits are further donated to the local animal protection organisation Right to Life.

For this reason, Bridge is keen to bring more visibility to the project. On May 18th several pieces from Opishnya were featured at the Field of Poppies digital art and NFT exhibition in Kharkiv.

In July, Bridge is also hoping to be selected to participate in a similar event set to be held in Chicago.

How a bishop, an art school and an animation festival brought hope to a war-torn Georgian village