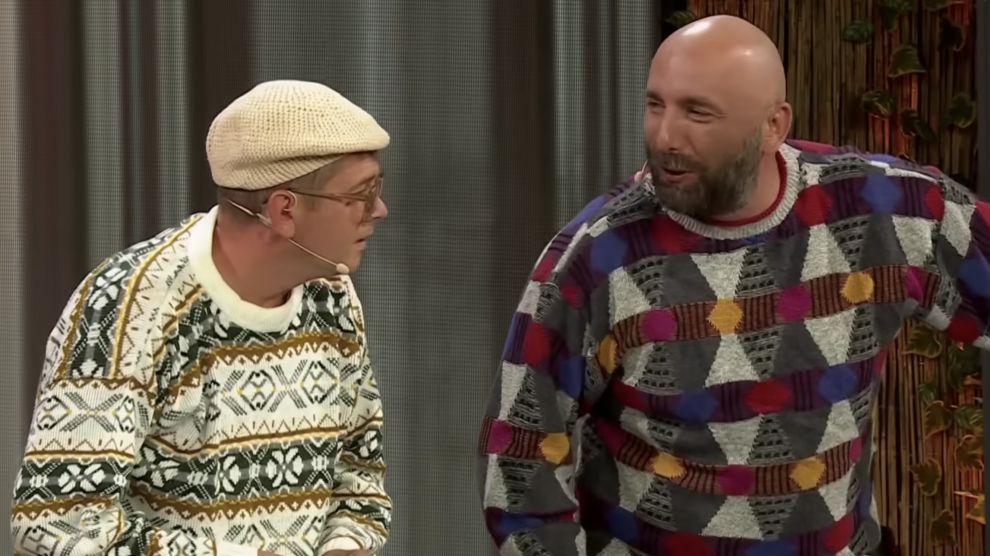 Poland’s kabarety, not to be confused with cabaret, are a unique cultural phenomenon used to criticise the country’s government even during its most repressive period. Are they once again under threat?

Kabarety, or kabaret, are a popular type of comedy show with over history in Poland that dates back more than a century.

They usually involve comedians performing sketches and monologues, sometimes singing, and can be performed as part of a kabarety group, solo, in front of a live audience, or on radio and TV.

One of the most popular contemporary kabarety groups is a trio that goes by the name of Neo-Nówka, known for their political, satirical and ironic style of comedy.

Their recent sketch Christmas Eve, which was aired live on the Polish Polsat television channel, caused quite the stir by openly criticising the Law and Justice (PiS) government and sparked a debate about the censorship kabarety groups increasingly face when creating comedy for television.

“In comedy, no one is safe; kabarety have been ridiculing prominent figures and politicians of all parties since 1905,” Justyna Wawrzyniuk a researcher of the language of humour and popular culture at the the University of Białystok, Poland, tells Emerging Europe.

Zielony Balonik, the first Polish literary kabaret, was founded by Kraków poets, writers and artists in October 1905. The art form then begin to thrive during Poland’s interwar years.

Warsaw’s Qui Pro Quo and Morskie Oko theatres became popular for their kabarety shows between 1919 and 1931, and between 1925 and 1933, respectively.

The Wesoła Lwowska Wave kabarety broadcast by Polish Radio Lwów, based in the now Ukrainian city of Lviv, grew in popularity in the 1930s.

“Political humour and comedy go hand in hand in Poland due to the country’s complex history, making humour one of the ways to criticise the status quo,” says Wawrzyniuk.

She explains that during the country’s communist period more covert forms of parody were necessary which included comedians using double-meanings to fool the regime’s censors.

Wawrzyniuk says that the kabarety of Poland’s modern history have included overt satire, as in the web series The Chairman’s Ear, inspired by the Law and Justice party, or a series of sketches parodying Donald Tusk’s government.

But the relative freedoms of the present day have not spared satirical humour from the controversy more in keeping with the recent past. In 2013 kabarety comedian Abelard Giza caused a commotion when he joked about the Pope.

“These, and other controversial performances, always bring up a discussion about the boundaries of humour,” says Wawrzyniuk. “Viewers who enjoy the performances emphasise how important it is for comedy to ridicule the incongruities of everyday life, including politics. Naturally, those who feel offended claim that comedians should keep politics out of comedy. The thing is, comedy and politics, both in Poland and everywhere else in the world, are intertwined.”

The premise behind the contentious sketch was to make light of the political divisions in contemporary Polish society, which are depicted through an imaginary 2022 Christmas dinner during which an elderly father represents a PiS voter, while his younger son represents Poland’s liberal opposition.

The sketch, which was uploaded to YouTube by Neo-Nówka and now has over 9.5 million views, faced criticism from PiS voters who were offended by how they were represented and by official figures within the party itself. An opposition MP however, Marcin Kierwiński of Civic Platform, tweeted that, “a government that fights kabaret is not only ridiculous but also finished.”

“The reception to Neo-Nówka’s performance is as polarised as the characters in the 2022 sketch, but what stands out among the reactions is the number of comments expressing disbelief, such as: ‘I can’t believe they let you say this’,” says Wawrzyniuk.

“These comments point to the realisation that there is unspoken censorship of comedy spread across all major TV stations in the country, be they state-funded or privately owned. The fear of potential consequences for the stations resulting from even alluding to ridicule directed at the governing party has forced kabarety to play it safe or go independent,” she adds.

This public debate resulted in other kabarety comedians sharing their experiences creating performances for the Polish television.

Rybarski further argued that Polsat was most likely not aware in advance of the type of jokes the Christmas Eve 2022 sketch was going to include, which is why the sketch cannot be found on any of its official pages online, unlike all other, similar performances. He further suggests that previous writers for Neo-Nówka have even had to resign due to the censorship they were facing.

“I think that pre-2016, the reception of Neo-Nówka’s sketch would have been a lot lighter, simply because the audience was largely used to watching political satire regularly even on state-funded television (TVP). 2016 marked the disappearance of kabarety from TVP programming, which used to be the go-to place for everything comedy,” argues Wawrzyniuk.

She says that since the political satire that the audience was so used to when watching kabarety is almost non-existent elsewhere, now any taboo-breaking performance receives a stronger reaction from both viewers and the targets of the jokes.

“More hopeful viewers claim that Wigilia 2022 might change the situation for the better, but I am more on the cautious side. Still, while political humour/satire on its own is not enough to facilitate social change, its influence should not be underestimated,” Wawrzyniuk concludes.

Value in the commonplace: Kaunas, George Mačiūnas, and Fluxus
A backpacker’s paradise: Travelling by bus to North Macedonia and Kosovo
Comment