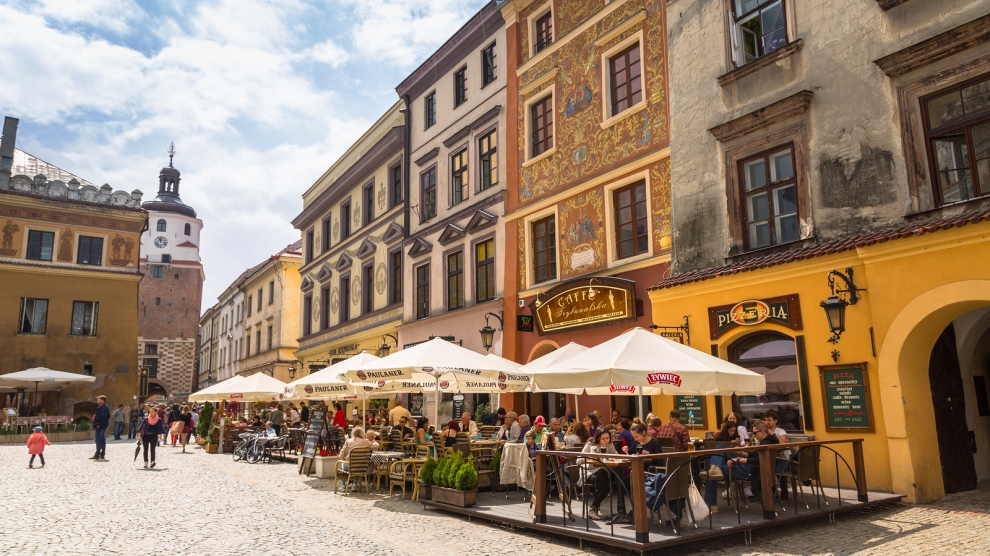 Though off the regular tourist radar, the south-eastern Polish city of Lublin is increasingly raising eyebrows on account of its beguiling Old Town and magical spirit. But hackneyed clichés aside, it’s also a city with a blossoming arts scene and alternative swagger.

Even at the height of summer, foreign accents are a rare sound to behold – and they diminish further as you exit the Old Town. Visit now, and you’ll find yourself exploring Poland’s best kept secret… and it’s all yours to share.

Lublin airport sits approximately 13 kilometres east of the Old Town with journey time by taxi weighted at under 20 minutes. With no taxi rank inside the building, arrivals are encouraged to arrange a cab via the desk inside the terminal. Expect to pay around 50 zloty. However, with only six or so international connections, most visitors use Warsaw as their landing point and arrive in Lublin on the train. The Old Town lies three kilometres north of the station, with taxi fares costing between 15-20 zloty depending on the honesty of the driver.

On the hotel front, the Alter (Grodzka 30, hotelalter.pl) is the biggest splurge in town with a world class design that bridges the past and the present – the medieval cellars are home to a holistic wellness centre that woos all who visit. For more uniform comfort, the Hampton By Hilton (Kompozytorów Polskich 1, hamptonlublin.pl) doesn’t disappoint, while the Grand Lublinianka (Krakowskie Przedmieście 56, lublinianka.com) has an almost Viennese character with its bombastic exterior and generous rooms. The city also scores well on the ‘aparthotel’ front: Boutique Residence Rynek 16 (Rynek 16) provides swish, elegant lodgings inside an atmospheric townhouse, while Apartamenty Browar Perła (Bernardyńska 15, apartamentybrowarperla.pl) have a design-led approach that tastes all the better for its connections with the local brewery.

Lublin’s historic centre escaped the devastation faced by many of Poland’s old towns, lending it an authenticity that amplifies its quite copious charms. Usually entered by Brama Krakowska – a squat brick tower capped by a Baroque dome – ambling its warren of alleyways is a simple, honest pleasure that never loses its thrill. Heavily loaded with shaded courtyards, extravagant churches and small little nooks, all explorations invariably rejoin Grodzka, the main thoroughfare that cuts through the district. Followed to its conclusion, the route leads to the castle (Zamkowa 9), a sparkling white affair that’s Neo Gothic in style. Here, essential viewing is provided by a paw print reputably left by the devil.

Below ground level, Lublin’s Old Town is connected up by a series of tunnels, corridors and chambers that hark back to medieval times. Dark and labyrinthine, a 280-metre section of these have been opened to the public to offer a quirky insight into the gloomy guts of the city. Scale models of Lublin ‘through the ages’ are the highlight and include one interactive model detailing The Great Fire of 1719. Just beyond the Old Town, make time for the Perła Brewery – engaging and smartly designed, over 20 cellars have been joined to tell the remarkable story of this local powerhouse – and yes, tours culminate with a well-warranted beer.

The Old Town is honeycombed with eateries and restaurants, many of which are of a high, almost unexpected calibre. Usually open only at weekends, Chapter One by Piotr Kwiatosz (Rynek 14, fb.com/chapteronebypiotrkwiatosz) offers fancy fine dining with a local spin inside an intimate, vaulted chamber – less formal, find the same chef executing regional slow food inside 16 Stołow (Rynek 16, 16stolow.pl), or else sit shoulder-to-shoulder with other diners in Mandragora (Rynek 9, mandragoralublin.pl), a spirited Jewish-themed restaurant festooned with wobbly antiques.

Lublin’s Old Town at night is an atmospheric proposition, its tight, cobbled streets flanked by foggy bars and pavement cafes. Trybunalska (Rynek 4, trybunalska.pl) is a late night solution for all, with its series of floors dealing out a range of cocktails and frontier-pushing beers. Where the latter is concerned, Św. Michał (Grodzka 16, fb.com/pubregionalny) is no second fiddle, proferring an exhaustive selection of brews from its 30-something taps. 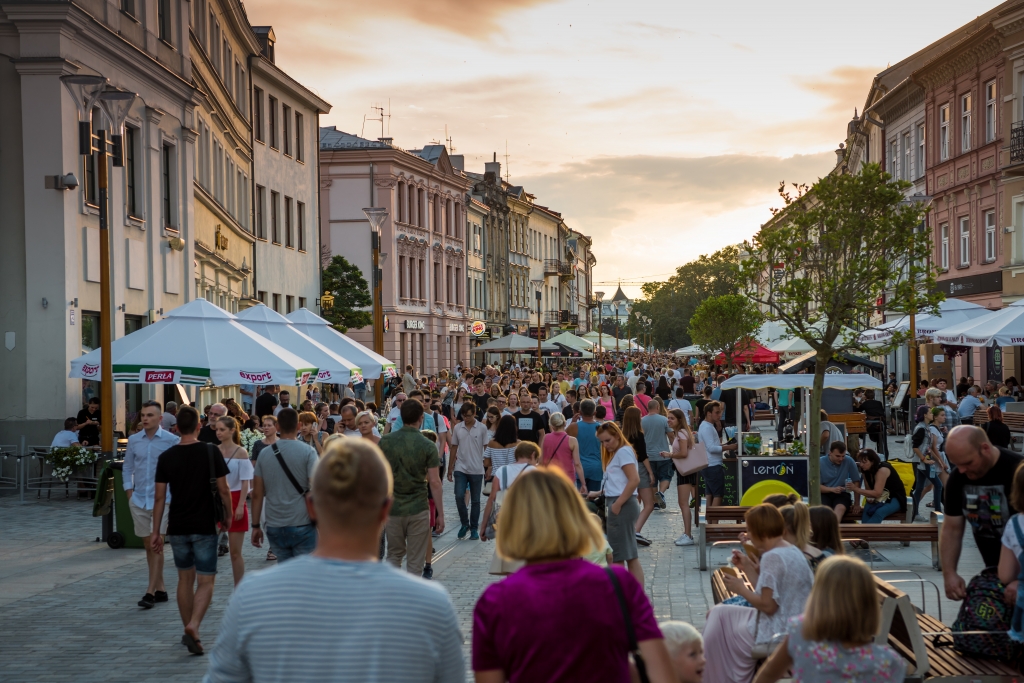 Formerly a renowned seat of Jewish learning, Lublin was once known by a variety monikers, among them the Polish Jerusalem and the Jewish Oxford. This changed under the German occupation, with the city playing a brief but prominent role in the Holocaust – serving as the command centre for Aktion Reinhard, it was here that the genocide of the Jews under the jurisdiction of the so-called General Government was planned. But it was more than just a logistical and administrative centre, a point underlined by the proximity of Majdanek (majdanek.eu). Lacking the throngs of Auschwitz, this concentration camp feels all the more haunting for its near absence of visitors. A morning spent walking the barracks and killing facilities is a stark glimpse into the region’s brutal past, and the contemplative nature of the morning well twinned by a visit to the eerie and ethereal Old Jewish Cemetery on your way back to town.

As the numerous outbreaks of out-sized street art suggest, Lublin is a city in the throes of an artistic revolution. It’s a point further manifested by the prevalence of independent galleries and alternative art spaces that are sprinkled about the town. Home to a printing museum, Dom Słow (Żmigród 1, teatrnn.pl/domslow) is one such place, with its chambers often given over to quirky exhibitions based around graphic and illustrative art. Galeria Labirynt (Popiełuszki 5, labirynt.com), meanwhile, has earned a name for its contemporary, experimental exhibitions, whilst no visit is truly complete with a full exploration of the CSK (Pl. Teatralny 1, spotkaniakultur.com). Seen from the outside as a monolithic glass cube, highlights include a rooftop ‘sky garden’ with a stunning glass walkway and the leading-edge Brain Damage Gallery (bd.pl). Specialising in graffiti, past exhibitions have included works by the likes of Banksy and Shephard Fairey.

Having smashed through the doors of perception inside the CSK, Saski Park opposite is a genteel and elegant antidote whose curling pathways and English-style gardens resound to the calls of the peacocks that prowl the pristine lawns. After, walk back towards Old Town to stop at Pl. Litewski. Seen by many as the city’s principal gravitational point, its crowning glory is a multimedia fountain park whose shimmering colours are particularly striking come nightfall.

More than just culture, CSK contains what many would argue to be one the finest multi-tap bars in the nation. Sleek and trendy, Browar Zakładowy (Pl. Teatralny 1, zakladowywielokran.pl) has a hefty choice of domestically brewed beers with adventurous flavours the norm. Similar craft experiences await at the nearby Just Crafted (Cicha 2) and Dziki Wschód (Jasna 7), though to really tap into the local vibe look no further than Perłowa Pijalnia Piwa (Bernardyńska 15A, perla.pl/pijalnia-piwa). Owned by the local Perła brewery, enjoy the full range of their portfolio inside a slick interior dominated by a long, gleaming bar that’s elliptical in shape. Featuring a slow-food menu with ingredients sourced from local farmsteads, meals are a convivial affair that reimagine rustic Poland through a sharp, modern prism.

Lublin in one paragraph

Amble the streets of Old Town both at ground level and below. After, visit the castle for an encounter with the devil, explore the town’s artier side at CSK or peer into the city’s bleak past by touring what remains of Majdanek concentration camp. When all is done, revel in the hospitality of south-eastern Poland in Perłowa Pijalnia Piwa or soak up the atmosphere of the restaurants of Old Town.

Postcard from a Bucharest tram (or rather, all 42 of them)
Budapest’s selfie museum: #sweet
Comment