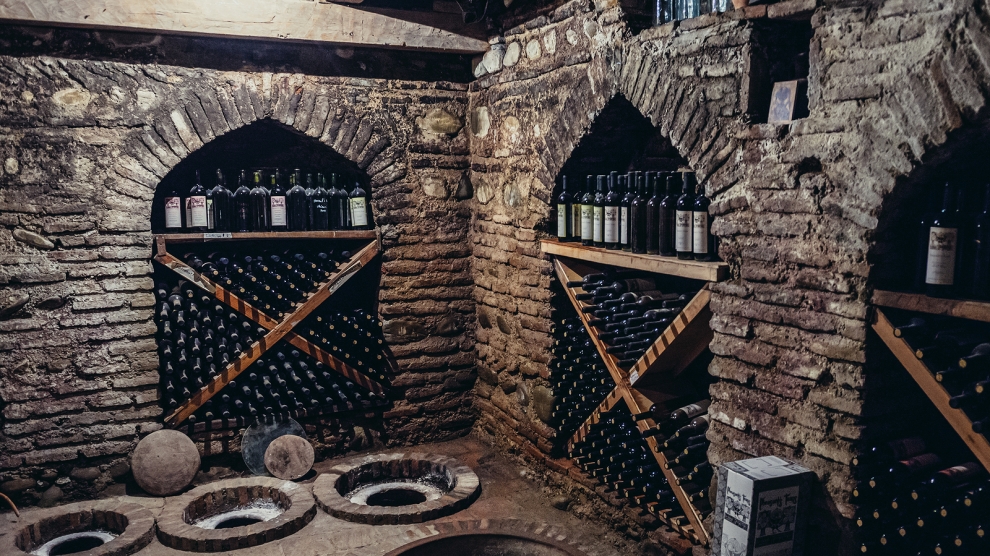 John Wurdeman fell in love with Georgia the moment he arrived, in 1995. He has never once regretted his decision to make the country his home.

I came to Georgia first in 1995, inspired by a recording of traditional Georgian music I stumbled upon in 1991. In 1996 I was a painting major at the Surikov Institute of Art in Moscow, and had studied a bit of Georgian history, language and culture in preparation for my visit. The very first night in Georgia my gracious hosts invited me for a supra (feast) and amongst the gorgeous food, amber flowing wine accompanying toasts and merriment, singers were invited in, they turned out to be the same group I had bought in a used record shop in Richmond, VA when I was 16. I knew at once my life would be intertwined with Georgia. I came back in 1996 and bought a home in Sighnaghi, Kakheti, a lively hillside town overlooking the Alazani Valley and the great Caucasus. Georgia had a romantic and wild appeal, it still felt like a very real place, a place for real tears, real laughter, and genuine hospitality. As an artist there was plenty of inspiring imagery, dynamic and various landscapes, evocative architecture, colourful people, and a culture both ancient and in a state of rediscovery after the Soviet experience.

I finished by degree in Moscow in 1998 and moved permanently to my adopted homeland, Georgia. In autumn of 1998 I met my wife Ketevan Mindorashvili, who was singing with family and friends outside at night and I followed them as a lover of traditional songs. We married in August of 1999, and I spent my time painting and doing field recordings, tours and workshops in Georgia and abroad with Ketevan and her group Zedashe. Sighnaghi back then like most of rural Georgia had little to no electrical supply, water mains didn’t function and there was no natural gas. This was exceedingly frustrating to my Georgian neighbours who were used to all amenities in Soviet times, but for me it was delightfully romantic, and helped me focus on the basics in life.

In 2006, the year Russia created an embargo on Georgian wines I met Gela Patalishvili, a young and passionate grape grower who made beautiful traditional wines. Gela was concerned that mass production of Georgian wine was taking over and many of the original varieties were being lost to the practicality of large scale farming and production, and he asked if I would join him on a quest to celebrate and share the authentic and unique qualities of artisanal Georgian wine. In 2007 Pheasant’s Tears Winery was founded with three principles: use only Georgian varieties, and try to bring back and study lesser known ones, farm organically, and use qvevri – the clay vessels for fermenting and storing wine until bottling. We poured our first vintage 2007 Saperavi in spring 2008, and since we have expanded to own seven small plots spanned across Georgia and grow many lesser known varieties such has Tetri Tskhenis Dzudzu, Kahkhuri Mtsvivana, and Shavkapito.

Very soon though we realised it was not only the wine scene that needed to find new life and reassessment but the culinary scene as well. As great as the blockbuster standard Georgian dishes are, 99 per cent of the menus in Tbilisi restaurants had the same Soviet standardised Georgian restaurant menu, and when travelling collecting songs and looking for rare grape varieties we realised the cheese, bread, fermented vegetables and variety of dishes in the rural regions boosted much greater diversity, and better ingredients.

Many visitors would seek advice on where to find authentic polyphonic music, wine, and food and so many started to come Ia Tabagari and I founded Living Roots, a small inbound travel company trying to help guests find rare wine, music and culinary experiences while using the profits to help foster indigenous traditions in the villages. These food and wine expeditions helped give birth to a book written and researched by Carla Capalbo, called Tasting Georgia, published last year in the UK.

It’s been some 22 years since I first came to Georgia. Today you see a country with flourishing tourism, a cutting edge culinary scene in Tbilisi, while young Tbilisi is leaving the city to become winemakers, mushroom foragers, or grow heirloom wheat varieties. There is a generation of young Georgians not marred in the least by the dark years of the succession of Georgia from the Soviet system that bore great violence, poverty, and managed to create a civil war, one of the most dreadful experiences for any nation. Georgia is still trying to hold on to its ancient roots but is also open minded, forward thinking and wanting to rediscover itself in the modern age. This dichotomy of being both very young and ancient at the same time, keeps Georgia full of surprises, and I have never for a moment regretted my decision to come here to live, feel, sing, paint, cook, and make wine. It is forever changing and now is a beautiful time to experience, one of the last ancient living cultures on earth.

Georgia’s Tourist Boom: Ready or Not?
The Rise and Rise of the Georgian Banking Sector
Comment