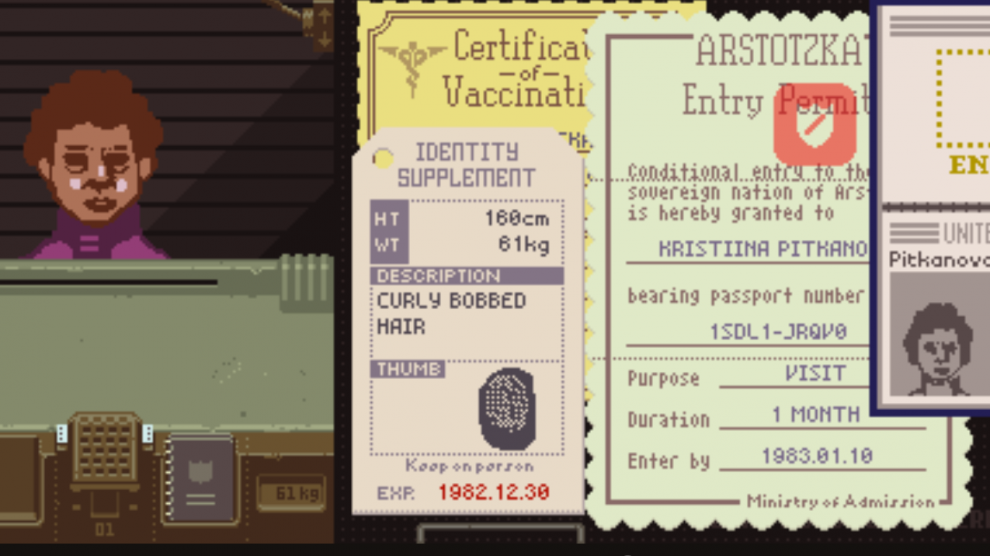 Ever dreamt of working at passport control in a communist dictatorship? Now’s your chance. A computer game – which I was made aware of when my daughter put it on her Christmas wish list – has done the impossible and made bureaucracy fun. Kind of.

The multi-award-winning Papers, Please – which is set in a fictional communist dictatorship in the year 1982 – must be one of the most bizarre games ever.

“The communist state of Arstotzka has ended a six-year war with neighbouring Kolechia and reclaimed its rightful half of the border town Grestin. Your job as immigration inspector is to control the flow of people entering the Arstotzkan side of Grestin from Kolechia. Among the throngs of immigrants and visitors looking for work are hidden smugglers, spies, and terrorists. Using only the documents provided by travelers and the Ministry of Admission’s primitive inspect, search, and fingerprint systems you must decide who can enter Arstotzka and who will be turned away or arrested.”

There are several ways of playing the game, from simply trying to correctly check as many passports as possible in 10 minutes to the various story modes which go way beyond simply processing a passport control queue, and in which your life in Arstotzka can become rather bleak if you get things wrong.

Mistakes are punished with heavy fines. Your salary is meagre to start with, so being docked a day’s pay because you were careless enough to allow somebody with an invalid visa into the country could mean your family has to do without heating for a week (you need to continually balance your family’s budget).

You will be faced with would-be immigrants to Arstotzka telling you (often rather bizarre) stories and pleading to be allowed into the country. Do you believe them and take pity on them, and risk losing a day’s pay? Then there is the occasional terrorist attack to deal with, and – predictably – the regular offer of (sometimes huge) bribes.

There is the odd deeply sinister episode too. My daughter’s fictional brother was arrested and imprisoned earlier this week, with the only reason given for the arrest being ‘this is Arstotzka’. She now has to look after his children on her pitiful salary (making her more liable to accept bribes of course). I’ve a suspicion it’s all a trap.

What is certainly a trap is this game. After all, it doesn’t really sound like much fun. We can confirm from experience however that it is horribly addictive and a work of genius.

What’s more, it only costs 9.99 euros. Buy it now, and cancel anything you’ve planned for next week.

Explaining life in quarantine to children: The Polish way