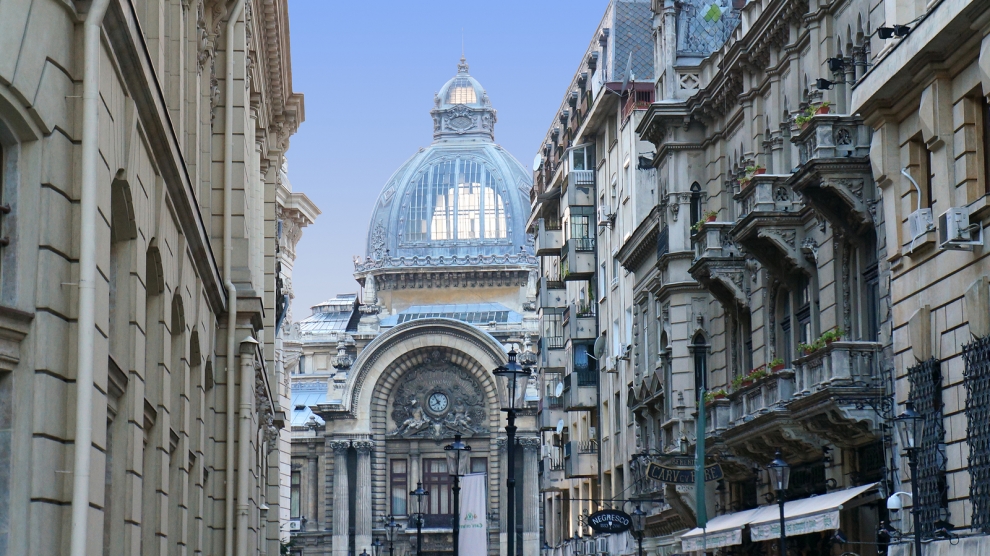 For a moment I thought I was in Austria or in Bavaria. The music, the yodelling, the clothes. The restaurant our colleague chose for that night offered interesting entertainment alongside dinner: boys and girls dancing in the middle of the dining room, wearing traditional costumes and inviting guests to join them. Only after I took a look at the menu did I remember I was in Romania.

Bucharest surprised me. It doesn’t look at all as I expected. First of all the people. Una faccia una razza (same face, same race) say the Greeks when comparing themselves to the Italians. But I actually found these words more true in Romania than in Greece. Those elegant men working at the national bank, those students walking down the streets, reminded me of home. And the language is much closer to Italian than I ever imagined. If I paid attention and really listened to what people were saying, I could understand many words and the meaning of entire phrases. I felt immediately integrated.

The cobblestone streets reminded me of the small medieval villages in northern Italy. The movida made me think of Spain, with all the restaurants and night clubs open until the first light of dawn. The view of the CEC building from Strada Stavropoleos (pictured above) looked exactly like the basilica of Budapest seen from Zrínyi street.

But what will remain in my mind forever are the taxi drivers. A completely separate species. All cars smell differently. They are like Harry Potter’s every-flavour beans, you never know what to expect next. The car we took on the first day smelled like fried tobacco. Wonderful. The second day it was the turn of aged bacon. Mixed with a catchy song complete with an explicit sexual meaning.

But my favourite was the man who took me to the airport on the last day. It was lunchtime and the traffic was insane. The driver was more nervous than me, worried that I would miss the flight. He sweated all over the place and kept wiping his forehead with napkins that would eventually land on the passenger’s seat. Several air fresheners were hanging from the rearview mirror, mixing the smell of morning dew with lemongrass and ocean breeze. But the guy was not satisfied. After having run a red light, he sprayed a little bit of perfume everywhere. “Too many cars smell like cigarettes”, he said, while nodding, satisfied.

Unfortunately, I only spent a few days in the Romanian capital, for a company weekend, not enough to capture the true essence of the country. I will definitely be coming back.