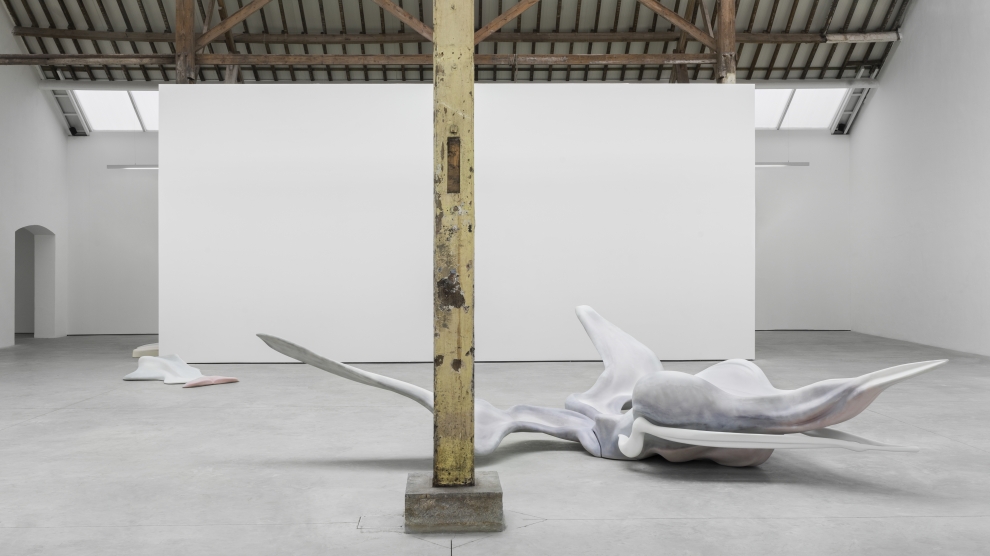 The second edition of Riga International Biennial of Contemporary Art (RIBOCA2), and suddenly it all blossoms, curated by Rebecca Lamarche-Vadel, opens to the public on August 20. The festival brings together 65 participants and nine collectives across a vast area of the historical Andrejsala industrial port area in the Latvian capital.

Originally scheduled to open in May, RIBOCA was postponed due to the Covid-19 pandemic.

Since the inception of the project, curator Lamarche-Vadel’s proposition has – fittingly, perhaps – been to reflect on the end of the world we live in, and to investigate the building of a new one with space for other voices, sensibilities, and ways of making relationships. The Biennial had thus been proposed as an alternative to the torrent of hopeless narratives, taking the notion of ‘re-enchantment’ as a frame for building desirable presents and futures. and suddenly it all blossoms grew from the Latvian and Baltic context, where worlds have ended many times, over centuries of occupations, wars and economic upheavals.

The collapse of the world, which the show was speculating on, actually happened, offering a challenging yet historical chance to make RIBOCA2 even more relevant,” says Lamarche-Vadel. “Amidst the Covid-19 pandemic, our ways of building and understanding relationships are being confronted, as we realise that we, porous to visible and invisible interactions, are participating subjects in a broad and diverse landscape far more complex than our bodies and minds alone.”

On approaching the RIBOCA2 district in Andrejsala, visitors will first come across a new series of billboard poems by Hanne Lippard. These texts evoke the “contactless” relationships that build the world we live in, its speed, ephemerality, and distance towards one another.

Passing the gates of this immense territory and entering the first hangar, visitors stumble upon Ugo Rondinone’s monumental rainbow sculpture life time which opens up perspectives on our understanding of time and existence. Due to the impossibility of transporting the original work, a new version was reconstructed in materials sourced locally in Riga. Hung on a brick wall above a small door, the work stands as the prologue of an exhibition built as an odyssey.

Passing this threshold, visitors encounter a wide field of stones and rubble of demolished buildings from around Riga, transformed daily by Bridget Polk’s rock balancing practice. The ephemeral and almost magically built sculptures are held in seemingly impossible balances and stage a poetic re-appropriation of ruins and building of new worlds through patience and resilience.

Continuing through the site, an installation on the waterfront by Lina Lapelytė and architect Mantas Petraitis, who have recreated the log-driving practices from Riga’s timber trade industry in the Middle Ages – when workers balanced on logs transported down the river – reflects on the relationship between men, natural resources and the force of the river in a performative representation of vitality and desire.

The largest venue of the Biennial is a former port building with 36 works on view. Valdis Celms, a pioneer of the Latvian kinetic art movement, has brought to life two projects first designed in the 1970s – large-scale kinetic sculptures that aim to invoke cosmic movements and energies that exist beyond human perception.

Pawel Althamer’s installation is currently a vast empty room in the exhibition space, which will gradually be filled by visitor contributions. Originally planned as a celebratory, collective and Dionysiac drawing session for opening night, the work had to be reinvented.

By using the universal technique of crochet to explain a complex mathematical theory that has revolutionised the understanding of the world, Daina Taimiņa makes geometries of chaos and disorder accessible. For months, the public had been invited to collaborate, with more than 600 works of crochet being sent from all over Latvia and the world, including the US and Australia.

Augustas Serapinas meanwhile initially planned to make copies of a hundred snowmen on Riga’s streets as a homage to the artistic collaboration between individual imagination and the earth’s resources. Historically warm weather this year prevented snowfall and Serapinas decided to work with locals to find ways of building snowmen using soil, engaging us to imagine what kind of rituals will replace this tradition as snow becomes increasingly scarce.

As for the artwork that could not be shipped, finished, or even begun due to the abrupt pause of the world’s dynamics and production systems, a display dialogue is planned instead. For instance, Marguerite Humeau’s work is represented by a guide describing the absent piece; a monumental sculpture of submerged body parts of a dying whale inspired by Latvian folklore and interrogating the hypothesis that climate change could be responsible for the rise of spirituality amongst animals.

A special RIBOCA2 family Sunday will be held on 23 August with a full day of activities and workshops for parents and children.

Lithuania to recreate spirit of Baltic Way with human chain for Belarus
Masha Reva: ‘I’m proud to be Ukrainian but I believe that an eye has to travel’
Comment