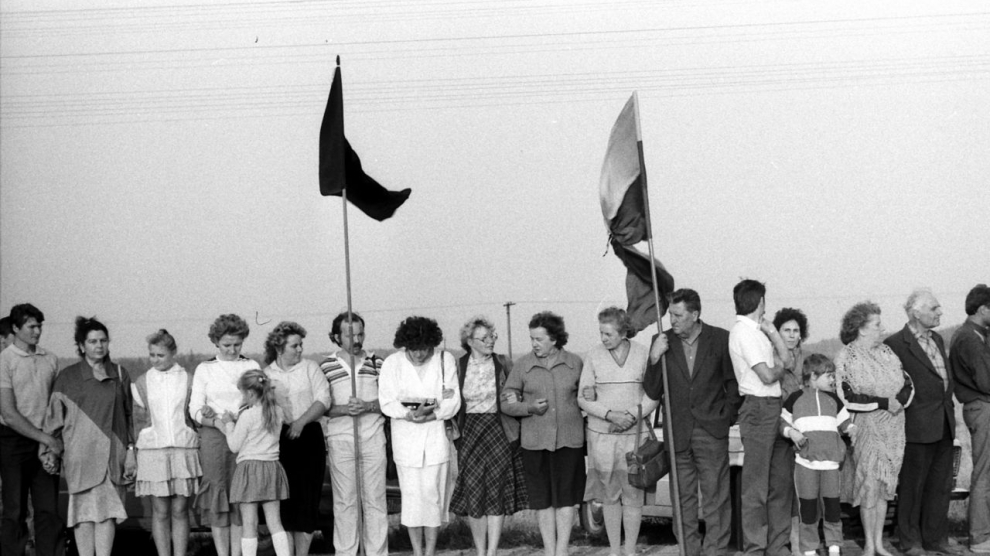 In August 1989, around two million Lithuanians, Latvians, and Estonians joined forces to create a 600-kilometre long human chain, which became known as the Baltic Way, as an expression of freedom and as a protest against the continued occupation of their countries by the Soviet Union.

The event was organised by three Baltic pro-independence movements: Rahvarinne of Estonia, the Tautas Fronte of Latvia, and Sąjūdis of Lithuania. The protest was designed to draw global attention by demonstrating a popular desire for independence and showcasing solidarity among the three nations. It has been described as an effective publicity campaign, and an emotionally captivating and visually stunning scene.

The event presented an opportunity for the Baltic activists to publicise Soviet rule and position the question of Baltic independence not only as a political matter, but also as a moral issue. The Soviet authorities responded to the event with intense rhetoric, but failed to take any constructive actions that could bridge the widening gap between the Baltic republics and the rest of the Soviet Union. Within seven months of the protest, Lithuania became the first of the Soviet republics to declare independence.

Now, Lithuania is expressing solidarity with the people of Belarus, who are fighting for freedom today.

Everyone not indifferent to today’s events in neighbouring Belarus is invited to join the Freedom Chain at 7pm on August 23, the anniversary of the historic Baltic Way. The human chain is planned to start in Cathedral Square in the Lithuanian capital Vilnius, and will end at country’s border with Belarus at Medininkai.

According to the Lithuanian public figure Andrius Tapinas, who is behind the initiative, “it is wonderful to see such support and unity among the people. Today’s struggle for freedom in Belarus is better understood by us than by anyone else, after all, we were in their shoes a little over 30 years ago. Volunteer organisations, Vilnius city council, the police, the Lithuanian Riflemen’s Union, the Lithuanian National Radio and Television joined us on the first day. There is not much time to organise everything, but everything is possible with such serious backing. And together, we have proven more than once that ‘impossible is just a mindset’.”

Lithuanian President Gitanas Nausėda, along with the former president, Dalia Grybauskaitė, will participate in the event and join the human chain together with the nation. Other Lithuanian cities are also planning to support the initiative: some of them are organising bus transportation to the main event, others are gathering people for local solidarity chains. Lithuanians in London are also intending to join hands in a symbolic Freedom Chain in Hyde Park.

Latvians, Estonians and Ukrainians have already said that they to will join the campaign.

Throughout the event, there will be a live broadcast from the scene on Laisves TV’s YouTube channel. At the Laisvės TV studio, journalist Rita Miliūtė will be speaking to experts regarding the situation in Belarus. Representatives from Belarus are expected to join in.

Those interested will also be able to follow the initiative on the Walk15 mobile app, which will mark the routes of the Freedom Chain in all countries in support of Belarus’s fight for freedom. The mobile app Walk15 will be available in Lithuanian, English and Belarusian.