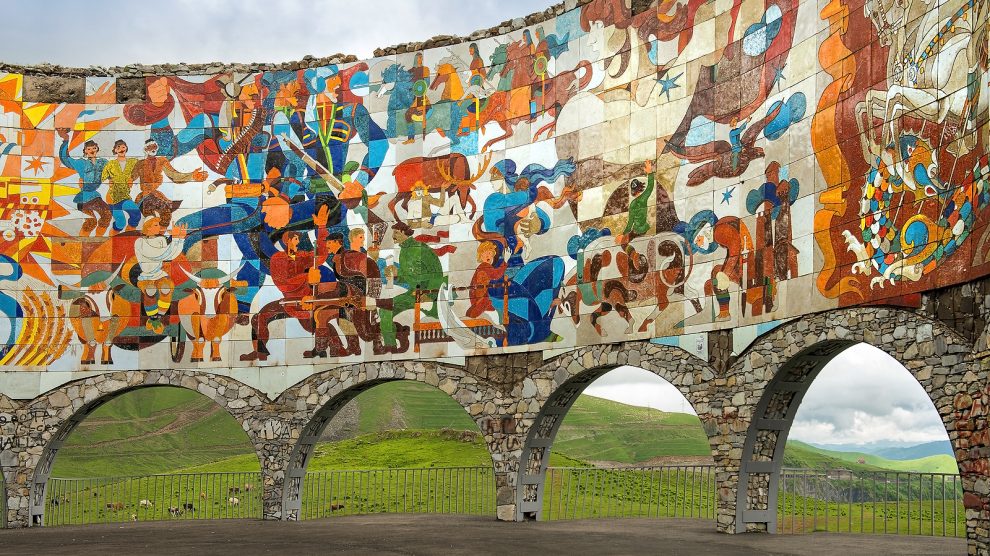 Across the former Soviet Union – and beyond – vast mosaics remain some of the most enduring relics of the communist era.

In virtually every city between Minsk and Dushanbe, huge, colourful depictions of a bright, socialist future adorn public buildings, apartment blocks and transport hubs, each executed in painstaking detail.

First commissioned in the 1930s, they have their roots in ancient Greek and Roman art, initially brought to the territory of the Soviet Union by the Byzantine Empire, which forged ties with the Kyivan Rus through Orthodox Christianity.

During the Stalin era, mosaics were stripped of their original, religious context and forged into the state-sanctioned style of socialist realism. They added colour to otherwise grey Soviet cities and promoted the accomplishments of the era.

They depict muscular peasants toiling in fields, engineers and scientists pointing the way towards a glorious future, and virtuous, stone-faced soldiers protecting women and children from fascism.

Or – as in the case of the mosaic above, located on the Russian Military Road close to the ski resort of Gudauri in Georgia – friendship between the various peoples of the Soviet Union.

A large mural from 1979 depicting firefighters on duty adorns the facade of the former Communist Party Central Committee building in Tbilisi, Georgia.

Although the proliferation of mosaics was halted during during the 1950s after the death of Stalin, they received new impetus once Leonid Brezhnev had deposed Nikita Krushchev in the mid-1960s. The majority of the mosaics still visible today were created during the Soviet construction boom of the 1970s and 1980s.

Many of these mosaics are today under threat. Following the gutting of the public sector in the 1990s, many simply fell into disrepair and have been poorly maintained for decades. In some countries, zealous administrations actually made deliberate efforts to destroy them, as parts of “decommunisation” efforts. This process was particularly widespread in Ukraine, where they were often replaced by tacky murals.

However, throughout the post-Soviet world, a new generation of art enthusiasts have been making efforts to preserve this important piece of cultural heritage.

Instagram accounts such as Socialist Mosaics and Ukrainian Mosaics catalogue and document those which remain, crediting the artists who created them and offering followers the backstories to each one.

A footballer in action on the exterior wall of a stadium in Hrebinka, Ukraine.

In Kharkiv, Ukraine, a 1972 mosaic dedicated to “the evolution of public transportation”.

Mosaics were not limited to the former Soviet Union. In Romania, dictator Nicolae Ceaușescu had a particular penchant for works of art inspired by heroic industrial labour, particularly mining.

As the country’s coal industry has been depleted, so have many of its communist-era mosaics followed. But some remain, particularly in the Jiu Valley, the heartland of the industry, known for its militant workers and home to Romania’s few remaining coal mines.

One of the many mosaics in Romania’s Jiu Valley celebrating coal mining.