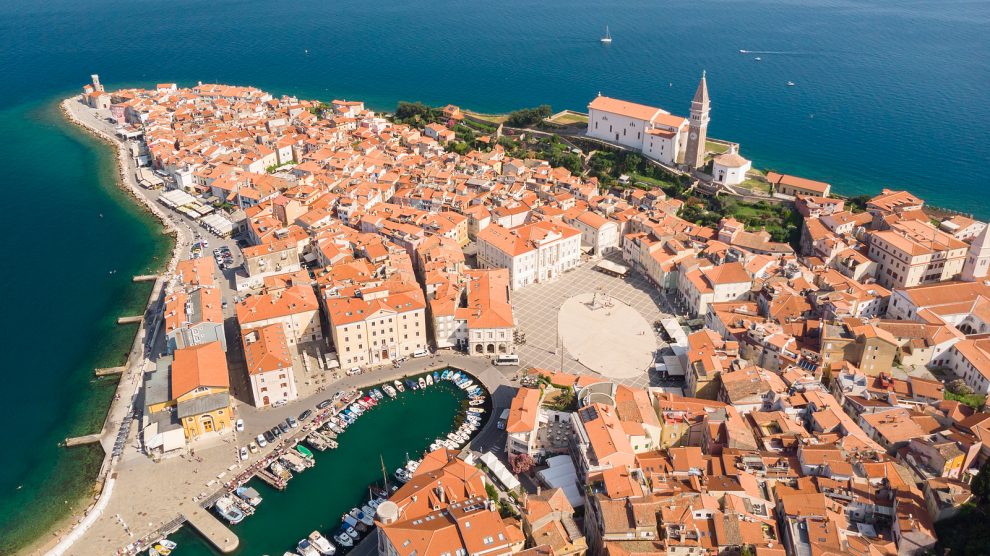 Slovenia’s coastline may measure just 47 kilometres in length, but it certainly packs a punch.

But while the small towns of Izola, Portorož, Koper and Ankaran all have much charm, but it is Piran, located at the tip of the Piran peninsula, that is the most spectacular of the bunch, renowned for its stunning medieval architecture and scenic views of the Adriatic.

However, while the town’s location has made it a popular tourist destination, it has also made it vulnerable to natural disasters further exacerbated by the climate emergency.

In November 2019 and again in December 2020, the medieval town experienced severe floods caused by heavy rains and high tides, resulting in landslides and road blockages.

The global rise in sea levels caused by climate change has been outlined as the most likely cause of these increasingly common floods, which have hit Piran and the surrounding region hard. But these climate-related challenges have now prompted policymakers and locals to take decisive action.

As part of the project, Piran will become one of 10 towns around Europe to become “live labs” seeking solutions to their most pressing climate-related challenges.

“The municipality of Piran is proud to offer its affiliate partnership to the SHINK2C project, which is run by Science and Research Centre Koper, and is part of SCORE, the EU-funded project worth 10 million euros,” Piran’s Mayor Đenio Zadković tells Emerging Europe.

The Science and Research Centre of Koper’s Mediterranean Institute for Environmental Studies, with the help of Piran locals, will in particular be focusing on ways to limit the waste of drinkable water and potentially create an early warning system for extreme weather conditions.

The SHINK2C project is Piran’s open lab vision of preventing the loss of drinking water, which points to the unnecessary waste of clean water when a toilet is flushed, suggesting that greywater should instead be redirected to tanks for this purpose.

This is said to in turn further reduce the presence of wastewater in the Adriatic Sea.

The flushing system suggested by SHINK2C will take water from showers and bathtubs in Piran and use it in toilets instead of drinking water.

Meanwhile, another aspect of the project will strive to develop an early warning system for floods, storms, and erosion.

More progress should be expected in the near future, as the was project only launched in July of this year, and will continue to receive EU funding for the next four years.

Piran as a sustainable tourist destination

“We sincerely hope that our contribution to the mitigation of climate change challenges will not represent just a small drop in the ocean but will offer viable solutions and good practices for the future of the wider population,” Zadković adds.

SCORE’s primary aim is to alleviate the consequences of the climate disaster on the residents of coastal communities. However, despite having less than 4,000 permanent inhabitants, in 2019 Piran was the second most visited town in Slovenia after the country’s capital Ljubljana, attracting more than 620,000 visitors, according to some statistics.

The willingness of those local to Piran to address climate-related challenges head on is part of what has made the town, as well as the whole county a popular destination for sustainable tourism.

“Slovenia has always been held up as the gold standard in our region in marketing the country to travellers from abroad,” Prague-based travel writer and author Mark Baker tells Emerging Europe.

“This is largely because they’ve — until now at least — articulated a clear values-driven (as opposed to attraction-driven) approach. Slovenia is ‘slow’, ‘clean’, ‘green’, and ‘sustainable’. Other regional destination marketing organisations, in my experience, admire Slovenia for this and have, to some extent at least, positioned their own countries and cities more in this direction,” Baker adds.