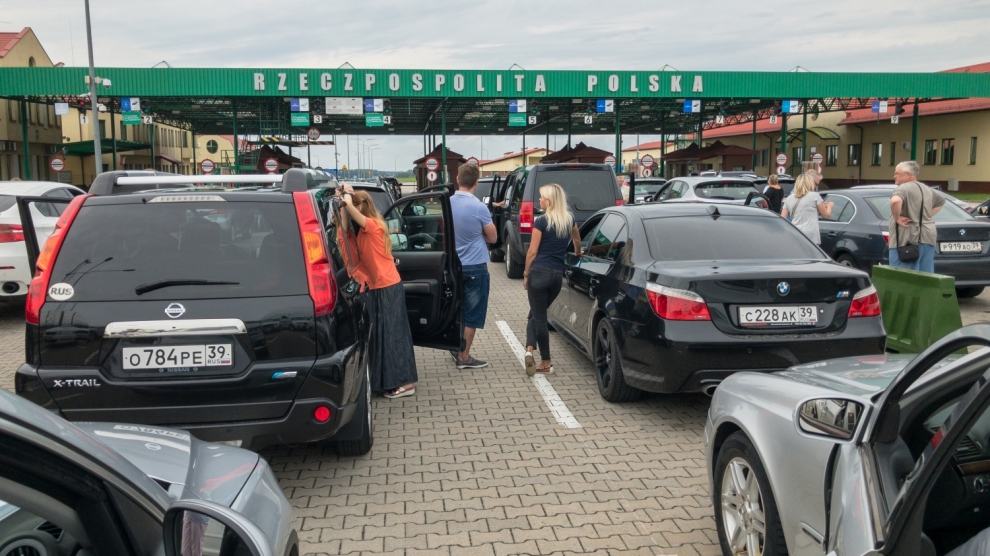 You need to do it on your own. I don’t have my passport with me so I won’t be able to cross the border. Good luck!

Those were the parting words – said in Polish – of Andrei, a Lithuanian taxi driver, as he dropped me at the Russian-Polish border checkpoint at Bagrationovsk.

He had kindly showed me around amazing Kaliningrad, or Little Russia, as the locals call it, where I had a layover of a few hours between my flight from Moscow and my bus to Lidzbark Warmiński in Poland, about 35 kilometres from the border – a place Emerging Europe had chosen to host a workshop and a seminar.

Of course, I could have flown from Moscow to Warsaw and then jumped on a bus or a train and spent some five or six hours but I thought I could fly to Kaliningrad, visit the oblast and then just cross the border – a shorter and more comfortable trip, and new sites to see. All very well on paper, but reality had other plans for me, and Andrei really had no clue how much luck I would actually need.

The first challenge was that this wasn’t a pedestrian border crossing so I simply had to be in a car. There’s no time to lose, I thought, as I looked at the long line of cars. I grabbed my suitcase and started approaching drivers to ask if they could give me a ride across the border. Yes, I know what you’re thinking… I also felt like I was trying to offer illegal products or services. This was 2014: hookup apps were not yet a thing.

It took almost 20 attempts until I found Romek, a young Polish guy who crossed the border every week to buy cheap gas, booze and cigarettes, and who agreed to smuggle me across the border. I was relieved.

Where are you going? an I-make-all-your-stereotype-dreams-come-true looking Russian female border officer in her late forties, with blond locks, a pizza-sized hat and a wooden stick said in her mother tongue when she took my passport.

I shook my head and I said I didn’t understand. But I am sure she was equally confused when she checked my documents. I must have been the first Brazilian citizen crossing the Russian-Polish border since the fall of the Soviet Union. She told Romek to stop the car and disappeared. At this point I was already feeling sorry for the poor guy who just wanted to go back home to his vodka. Alas he was stuck with me.

Some 40 minutes later a male officer arrived and asked Romek to go with him. After interrogating him, it was my turn to answer dozens of questions about what my company does, what my job consists of, what event we were organising in Poland. He then told us to go back to the car, where I tried my best to apologise to Romek. Meanwhile, I was dying to go to the toilet but I was too scared to ask in case they could think I was up to something dodgy.

Fast forward another 40 minutes and I cannot hold it any more. I venture out and the policeman is coming towards me with my passport and passes by me. Dreading the outcome of his research on me – they might have concluded I was a spook – I bravely march towards the toilet and reach it just in time to avoid an international border crisis. When I come back, the picturesque-looking blonde is waiting for me. She drops the passport on the desk and says Go to Poland; in English, for a change.

We finally leave and I promise Romek to pay for his booze and cigarette arsenal in the duty-free zone to make up for his lost time. Already feeling less guilty for the troubles I caused him, I want to withdraw money from an ATM, as the duty-free is cash only. The machine swallows both my cards and spits them back multiple times: not accepted. Romek, in his turn, swallows his disappointment and anger and pays for the shopping with his own cash.

We get to the Polish border officers. One of them asks me where I was coming from and where I was headed. I say I am Brazilian, I live in London, I went to Moscow for work and then flew to Kaliningrad to then get to northeastern Poland and then to Warsaw and London. I see an unwillingness to untangle this web on his face, so he simply stamps my passport. I’m off his hook. I am free. I am in the Schengen zone and I can travel all the way to Portugal without going through another single border control.

And I learnt my lesson: things are not always as easy as they appear on paper. Especially in emerging Europe.