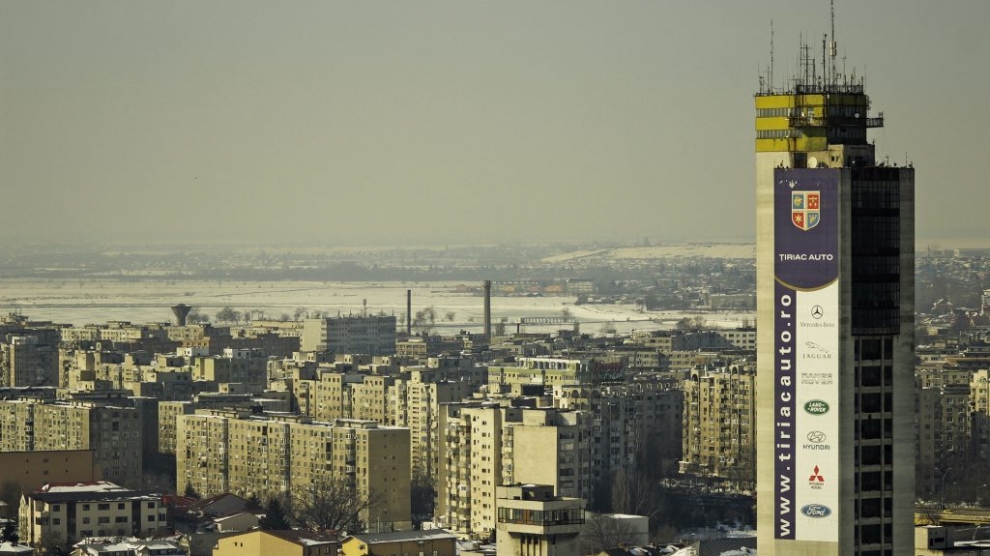 It is not, by any stretch of the imagination, one of Bucharest’s most eye-pleasing buildings. It has never been open to the public, has never been on the tourist trail, and in recent years only a few daring photographers and urban explorers have ever ventured to its upper reaches.

And yet at the same time the city’s lift-testing tower, part of the Întreprindere de Fabricație și Montaj Ascensoare (IFMA), has for more than 35 years been one of most immediately recognisable buildings in the Romanian capital: everyone arriving in Bucharest by train sees it, standing as it does next to the tracks that lead towards the city’s main railway station, Gara de Nord.

At the end of March however, with much of the city’s population confined to their homes, demolition of this industrial giant began without notice. By the time the coronavirus lockdown is lifted, it will be gone.

The tower was constructed from 1983-86 to test the lifts made at IFMA, whose manufacturing facility was on the same site. IFMA produced almost all of the lifts installed in the thousands of apartment blocks constructed in Bucharest and across Romania during the 1960s, 1970s and 1980s.

However, according to Cristi Radu, founder of Rezistența Urbană (The Urban Resitance) an independent online civic opinion platform, documenting and promoting Bucharest since 2007, there was allegedly little testing carried out at the tower before the Romanian Revolution of 1989.

“But it appears that the elevators of the current Parliament Palace, a gigantic totalitarian-era structure also dating back to the 1980s, were tested at the tower,” he tells Emerging Europe.

The concrete tower, which measures almost 100 metres in height, incorporated 10 elevator shafts connected by platforms and was destined to test various elevator types using sensors and other control equipment. Radu says that it was one of the most earthquake-resistant buildings in the city: memories of the 1977 quake in which more than 1,500 were killed were still fresh at the time of its construction.

In the aftermath of the Revolution the operations ceased, and the country’s new government attempted to sell the tower to a number of major European lift manufacturers, but had no takers. It was subsequently bought, with much of the surrounding land, by the controversial businessman and former tennis player and impresario Ion Țiriac, who proceeded to do nothing with it for almost three decades except use it as a glorified advertising hoarding for banners proclaiming the merits of his various companies. Its roof was employed as a convenient location for mobile telephony masts.

Țiriac now wants to use the site to construct offices and apartments. Some reports even suggest that Romania’s highest building will be erected on the site of the tower.

“The tower was a great feat of Bucharest industry, widely recognised by nearby residents but also by many coming to town by train who spotted its shape as part of the cityscape,” adds Radu. “It could have easily been repurposed and integrated into the new project, but apparently there was no interest in doing so. Bucharest has lost yet another relevant industrial building amidst the lockdown caused by the Covid-19 pandemic.”

There is a precedent in Bucharest for creating points of interest out of former industrial buildings. Several years ago, a much smaller but no less striking tower in the eastern neighbourhood of Pantelimon, part of a former textile plant, was converted into an art space by an NGO, Make-a-Point.

A rather elegant exterior staircase was added, allowing visitors to climb up to a viewing deck from where the Pantelimon neighbourhood can be admired. The interior is occasionally used for exhibitions and installations: windows have been added and as you make your way up the exterior staircase, you can look inside and see the work on display (which is often hung from the rafters).

The real joy of the tower however is the perspective of Bucharest you get from the viewing platform. For what you see from up here is far more representative of this city than what you will see from any of the tall buildings closer to the city centre. The blocks, the factories, the traffic: these are what an eastern European city like Bucharest is all about. Blocks in which people sleep, before travelling on the busy roads to their places of work.

To properly understand Bucharest we should start by exploring the city’s margins, for they are as an important part of the city’s urban and cultural heritage as the more picture postcard-friendly centre.

The IFMA tower offered far greater potential than the Pantelimon tower. It has now been lost, and another part of Bucharest’s once rich industrial heritage has been lost forever.